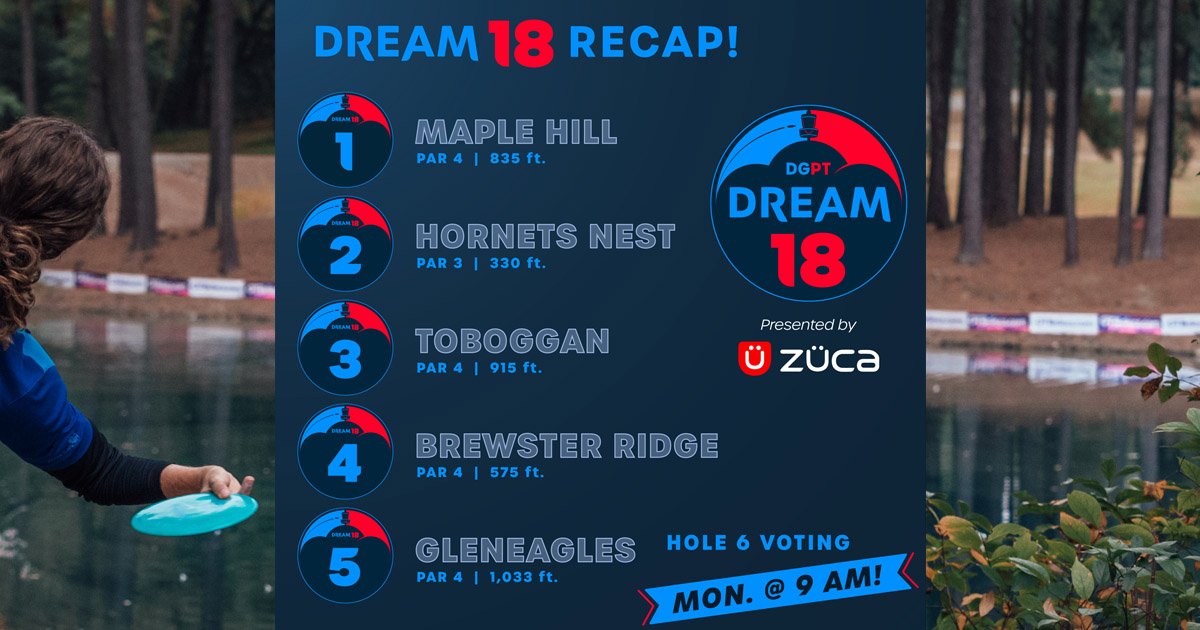 In partnership with ZUCA, the DGPT is giving away a brand new Trekker Cart! To enter contestants must fill out a form attempting to predict the winning holes of the back nine Dream 18 Fan Vote. Whoever’s guess is the most accurate will win the cart. If more than one person chooses correctly, then all those matching will be put into a random pick generator, and a winner will be selected. One entry is allowed per person, and individuals have until April 9th at 9 AM ET to enter. Make your picks now!

We are one week into our three and half week Dream 18 campaign. Five holes have been added to the DGPT Fans Dream 18 course. Let’s take a look at each of our winners from this past week and then look ahead to the next week of voting.

Receiving 63% of the vote Hole One was the only real runaway victory that we saw this week. At the announcement of a Dream 18 contest, it would not be hard to guess that this one would win. In a separate vote that we are running alongside the Fan Vote, Touring Professionals agree that this starting hole should be the top of everyone’s list. If you have not read the recap, you have probably guessed, the winner was Maple Hill.

Here’s what we had to say about the hole at the start of voting: “The starting hole at Maple Hill is one that many players dream of standing on one day and throwing. Looking down across a field of Christmas trees to a pond and then the basket tucked away in the woods in the distance, this hole is not for the faint of heart. At 835 ft with 475 ft to clear the water for the MPO division, it’s a huck to have a shot at birdie. Once on the fairway, players must then throw into a woods protected island green. The hole was made famous by chipmunk gate during the 2016 Vibram Open play-off between Michael Johansen and Bradley Williams. Check out the flyover of the hole from Jomez’s 2018 Round One Coverage of the MVP Open.“

If you haven’t already, watch the flyover linked above, Big Jerm goes so far as to call it the best starting hole in disc golf. It’s pretty clear why this one was a runaway victory.

In a move that shocked both the Pro Tour staff and Traveling Professionals, the winner of the Hole 2 Dream 18 Fan Vote went to a hole that is only in play for tournaments. The Professionals split their vote over two holes, with 76% of the vote going to Brewster Ridge Hole 2 and 24% going to Disc Side of Heaven. However, with 37% of the fan vote, Hornet’s Nest Hole 2 was crowned the victor.

Here’s what we had to say earlier this week about Hole 2 at Hornet’s: “One of the defining holes at Hornet’s Nest, Hole 2, is a 330 ft island hole that is only in play for tournaments. Most players attack the basket from a right-hyzer line looking to at least stick the island if not snag an ace. See how the players played the hole at last year’s Tour Championship, thanks to Jomez.”

Consensus was found again among the fans, professionals, and Pro Tour staff in regards to which Hole 3 would make a Dream 18 DGPT course. This downhill bomber is one of those holes that everyone sees and wants to throw one more from the tee box. Hole 3 at the Toboggan course won the fan vote with 34% of the vote, and the player’s choice with 55% agreeing.

We had the following to say about Hole 3 at the Toboggan: “At 915 ft, this downhill hole is a Par 4 monster. As players throw down the toboggan run, they must avoid the rough on both sides. This hole is a real rip it and watch hole. Once players make it to the bottom of the hill, they must throw across a circle of OB rough to try and make the green. Watch the flyover from Jomez’s first-round coverage of the 2018 Great Lakes Open, but come back to watch Paul McBeth almost grab the eagle from his second round at that same event.”

The most contested hole so far in regards to voting, this hole won the fan vote with only 24%. The professionals agreed that this was one of the toughest holes to choose from and as such only 44% voted for the same hole that won the fan vote. In fact, for the professionals, after the winning hole, the next three options received just over 16% of the vote. It was a close race, but in the end, Brewster Ridge Hole 4 was both the people and the pros choice.

We said the following about Brewster Ridge Hole 4 earlier this week: “Brewster Ridge: Hole 4 at Brewster Ridge is another long but fair wooded Par 4. At 575 ft, players have an open drive with two defined fairways, one more straight at the basket and a second for the left-handed hyzer throws. If the second throw is placed well, players will be putting for a birdie. See how the hole unfolds on the Jomez flyover from the 2019 Green Mountain Championship. ”

Going into the vote, the assumption was that one specific Hole 5 would run away with the vote. However, the fans came out in full force for a few different courses, and the vote became another race to the finish. At the end of the voting, the Hole Five winner was Gleneagles, with 40% of the fan vote.

Here’s what we had to say about Gleneagles Hole 5: “Hole 5 in San Francisco is a monster 1,033 ft Par 4 for MPO and Par 5 for FPO players. The downhill drive with the Cow Palace in the foreground creates a compelling disc golf hole. Players are hoping to keep their first drive in the fairway so that they can have an open upshot to the green. Players whose drives end up left of the fairway have to deal with a forest of pine trees that they must navigate to make it back to the fairway and gree. Check out Jomez’s 2018 flyover from the San Francisco Open to see it for yourself.”

So far, only one course has not been voted for across the first five holes, and that is Vista Del Camino. We would guess that given the design of the Vista Del Camino course, there will be some holes here in the next week that will begin receiving some votes. Up until Thursday, Sunset Hills was the other course that had not received any votes. It seems like some players do think the hole where Valarie Jenkins won the 2017 Ledgestone Insurance Open in a play-off is one they would like to play as well.

Voting resumes Monday at 9 AM ET. As was noted at the top of the article, we are doing a ZUCA sponsored giveaway to the person who most accurately predicts the Fan Vote Winners of the Dream 18 Back Nine. You have until April 9th at 9 AM ET to get your picks in. You can submit your picks on the form embedded below: