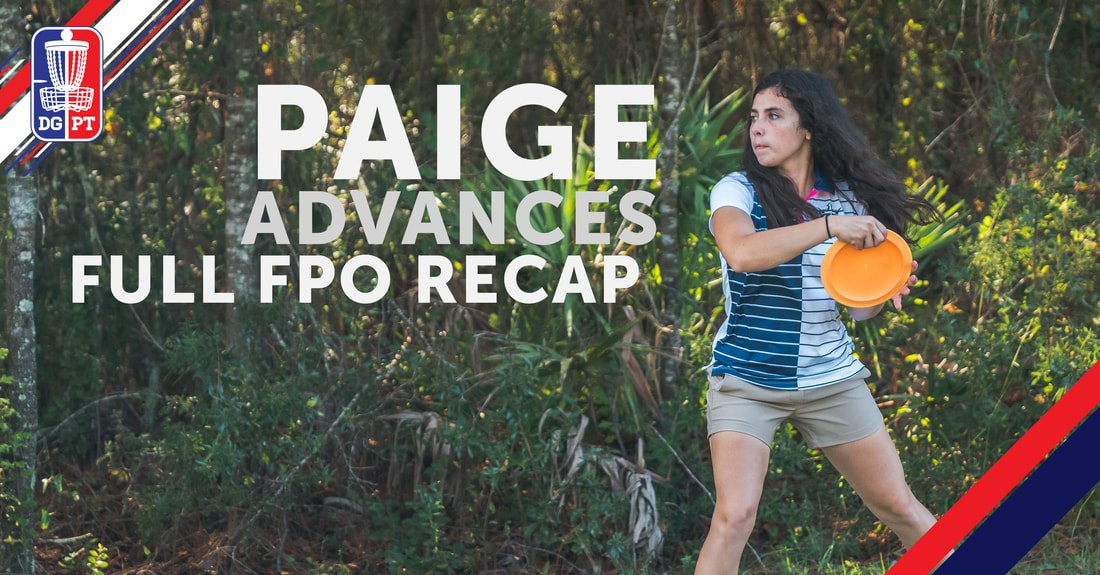 DGPT Championship Recap: FPO Semi-Finals – Paige is out, Paige is in, Up is Down, Left is Right

​Going into today, the FPO field and the disc golf community knew only four players would be advancing. However, the question was whether we would see a bulk of players from one card or two from each card. If two from each, who would it be? Now we know and what a doozy it was. Check out our updated bracket before we get into the nitty-gritty.

On the noon card, Jessica Weese came out on fire throwing three birdies in a row to gain an early lead. Across the day Jessica was able to avoid the OB and bogeys, only taking two of each which helped her maintain the lead on her card. Jessica made three of her seven Circle 2 putts and just missed two of her Circle 1 putts finishing with field-leading 88% on the day. That was really where Weese put her round together, on the green. It’s a small field, so every player will be ranked in the top 8 for stats but Weese finished top four in every stat and first from Circle 1 and Circle 2. Her bogeys were also on two of the four hardest holes on the course, so she wasn’t really losing throws to anyone there. Shockingly, Weese will be the only person continuing on from her card as there were three players on the top card who either tied or bested her.

Perhaps the most shocking news of the day is that Paige Pierce, the highest rated FPO player of all time has not made the Finals. It’s not like she shot a bad round either, finishing at 3 under par. Anytime you get boxed out of making the cut by one it’s easy to look back at each and every shot that wasn’t perfect and think it was the cause. Despite seven birdies, it was two bogeys and a double bogey that is keeping Pierce from playing tomorrow. Sadly, it was a common story for Paige, dominant off the tee and on the approach but lackluster on the green, making only 85% of her circle 1 Putts. Pierce is committed to the game though, as the top card played their round Pierce was right there with them taking photos and participating in the community.

Ellen Widboom and Rebecca Cox struggled to put up competitive rounds today. Widboom finished +5 and Cox at +13. There were some big numbers for everyone but it was OB that came for Cox and Circle 1 for Widboom. Cox went OB a total 6 times and Widboom finished last in Circle 1 Putts at 74%. Their days weren’t devoid of good moments though. Widboom pretty much parked every birdie she carded and Cox did sneak an 87’ throw in for birdie on hole 11. That’s a pretty good way to fire back after a chain of tough holes.

On the top card, it’s hard to really say what the story was. Was it Catrina’s 8 total birdies? Or Paige Bjerkaas’s resilience holding off Paige Pierce and avoiding the tie? Or How about Sarah Hokom’s 16 clean holes before her first bogey on 17 to keep things nice and tight for those of us watching? Hard saying not knowing. But before we get to their rounds a resounding honorable mention for Madison Walker playing through injury and finishing with a birdie on hole 18. She’s a seasoned veteran and will no doubt be back to keep pushing the field higher and higher.

Paige Bjerkaas seemed on track like she was at Worlds. Four down through six, she wobbled in the center cut going bogey-birdie-bogey-birdie as she settled into a tie for a while with Paige Pierce. But she pulled one throw ahead on hole 16 with a huge 70’ jumper for birdie . From there forward, all she had to do was hold on to par with all she had to secure her spot in tomorrow’s quarter-finals.

Sarah Hokom cruised maybe a little bit too slow at the start of the round, carding six pars before her first birdie of the day. She would go on to collect five more birdies before her first bogey on hole 17. Hokom led the pack in Fairway Hits, Circle 2 In Regulation, and Scramble. The putting could certainly have been better but it was more than good enough for the hot round of the day at 5 under par.

Catrina Allen was absolutely on fire for much of the day. Birdieing 44% of the holes she played by leading the pack in Circle 1 and Circle 2 in regulation. Catrina is likely feeling a bit peckish in Circle 2 though as she failed to make a single putt outside Circle 1. Things were looking especially rough right at the finish for Catrina as her dominant lead crumbled just a couple throws in the last four holes. Nothing to be disappointed with though when you have your share of a tie for the hot round at the DGPT Championship Semi-Finals presented by her own sponsor, Prodigy Discs.

Don’t miss any of the action this weekend. You will regret it because all these cards are looking absolutely stacked. The women will be taking the day off tomorrow though due to the smaller field. On Sunday we will be back with the finals between Sarah Hokom, Catrina Allen, Jessica Weese, and Paige Bjerkaas. I honestly have no idea who is coming out in first but I am beyond excited to find out!