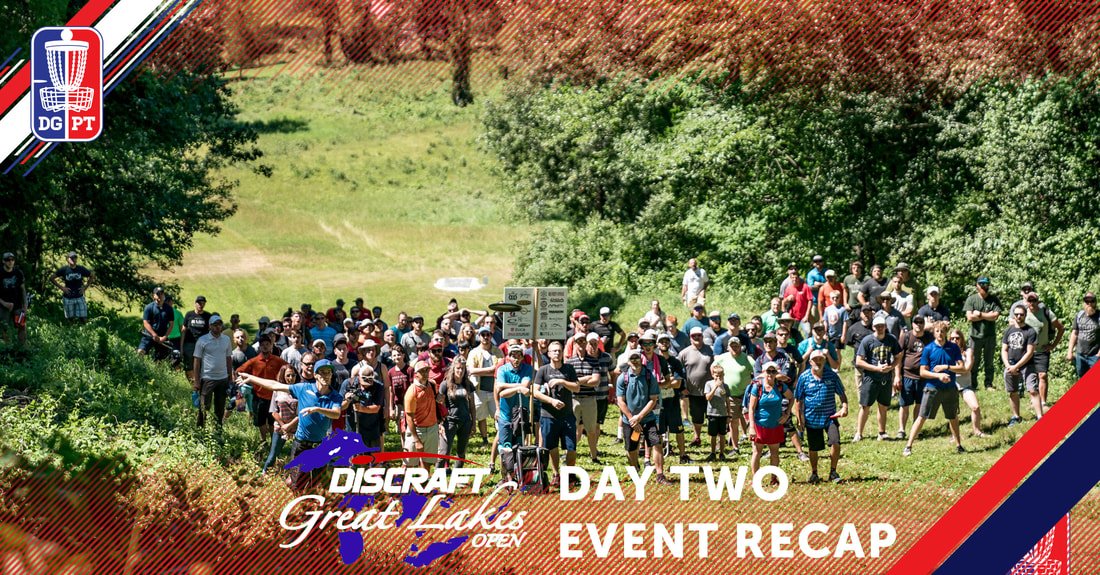 Day two of Discraft’s Great Lakes Open had plenty of fanfare and atmosphere to go with it. To encompass the festivities surrounding DGLO we have to step back to last night’s player’s party. The player’s party took place at Witch’s Hat Brewing Company and featured a special Buzzz mystery box spectacular which included not one, but two sets of limited run Buzzzes up for grabs.
The Disc Golf Pro Tour brought over Discraft’s pendulum putting game and players tried their best to hit putts to win a Buzzz bag and two stacks of Discraft discs. Andrew Kaluk ended up winning the Nate Doss signature bag.


Also included in the festivities was a DGPT wall of boxes. They were a massive hit as always, and people went home with prizes of $35 plus for only a $25 cost. If you have not attended a Pro Tour event, you will want to come to one of our upcoming ones just for the wall of boxes!

If you have not heard, today was a special day on the Toboggan course both Sarah Hokom and Paul McBeth had phenomenal rounds, and you will want to catch the post-produced coverage of each. Sarah’s will be on the DGPT YouTube channel, and Paul’s will be on Jomez.

Today after the round the Festival of the Flying Disc was in full swing. There was another 100 box wall of boxes filled with opportunities to win two different baskets, two Prodiscus bags, and plenty of other Disc Golf Pro Tour Swag. Not only does the Festival of the Flying Disc feature mystery boxes but there is the festival itself. The gallery stuck around after the rounds were over today and played festival games for a chance at prizes including a Discraft bag which was raffled off to all of those who participated in the festival.

The real story of the day though was the gallery. The disc golf community in Michigan and surrounding areas showed up in full force today and created a massive gallery that not only followed the lead cards of both FPO and MPO but also a few of the chase cards as well. Nothing beats watching professional disc golf in person, and today did not disappoint. The FPO gallery saw a -6 bogey-free round from Sarah Hokom and the MPO lead gallery witnessed Paul McBeth’s one par, -18 round.

You will want to either join the gallery or tune in tomorrow and watch both the FPO and MPO tackle the Toboggan course. The lead FPO round will have shot-by-shot coverage at 2 PM ET and 3:15 PM ET for the MPO. Share with your friends and watch. It is an exciting time for disc golf.