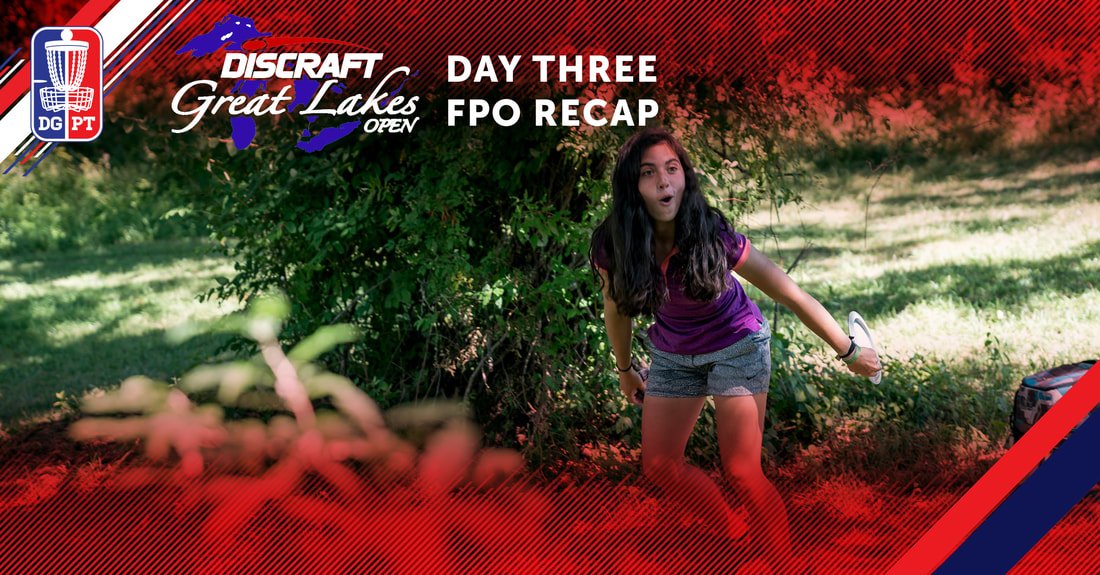 After a historic six under on moving day, Sarah Hokom was able to turn on the cruise control today and bring home her second Pro Tour win of the season. Sarah started off the day the same way she started yesterday, four under thru four. She then played for the win, not running any putts and accepting her bogey on hole eight without attempting to save the par.
Sarah’s -2 tied Paige Bjerkaas for the hot round of the FPO division today, showing there were not many players pushing to move up on the final day.

The real story of the day came from Paige Bjerkaas and Jessica Weese who battled back and forth to determine who would take down second place. While Jessica started the day only one throw behind Paige, she quickly ended up in a hole after carding the bogey six on hole two. Jessica would then strand together 11 pars while Paige battled with two birdies and two bogeys keeping Jessica at bay. On hole 14 Jessica pushed when she landed a birdie putt from C2 while Paige carded the bogey. Paige would answer though on hole 16 to move back into a two throw lead by carding her own C2 putt for birdie. The putt would seal the round for Paige, and she brought home another second place finish at a Disc Golf Pro Tour event.

Catching up with Paige Bjerkaas after the round, we discussed her experience on the Disc Golf Pro Tour so far this season and how she is hoping to finish out the year. So far, Paige has played San Francisco, Utah, and DGLO this season. She has finished in the top ten at each event and has notably finished in second at the last two. Paige said she felt like DGLO was her favorite so far on the course because she was able to finish in second place. Paige said for overall tournament atmosphere Utah was great. Paige felt like the key to her solid finish at the Toboggan course was her ability to scramble when in the rough and the lack of OB possibilities.

This season was the first time Paige has attended a Pro Tour event. In describing the Disc Golf Pro Tour, she said; “My favorite thing is definitely the women’s tent, I also appreciate the women’s tees and how San Francisco adjusted the pars for the women.” She conceded every event is not without its hiccups, but overall she has enjoyed her time playing at Disc Golf Pro Tour events. Even though it does not say it on the schedule, Paige said after her solid performances at Utah and DGLO she is planning on coming out to Idlewild and Ledgestone. We will be looking forward to hopefully seeing her again at the next two events.
​

Make sure you tune in at 2 PM ET today to catch the full round coverage of the FPO division and mark your calendars for the next Pro Tour stop at the Idlewild Open July 20-22.