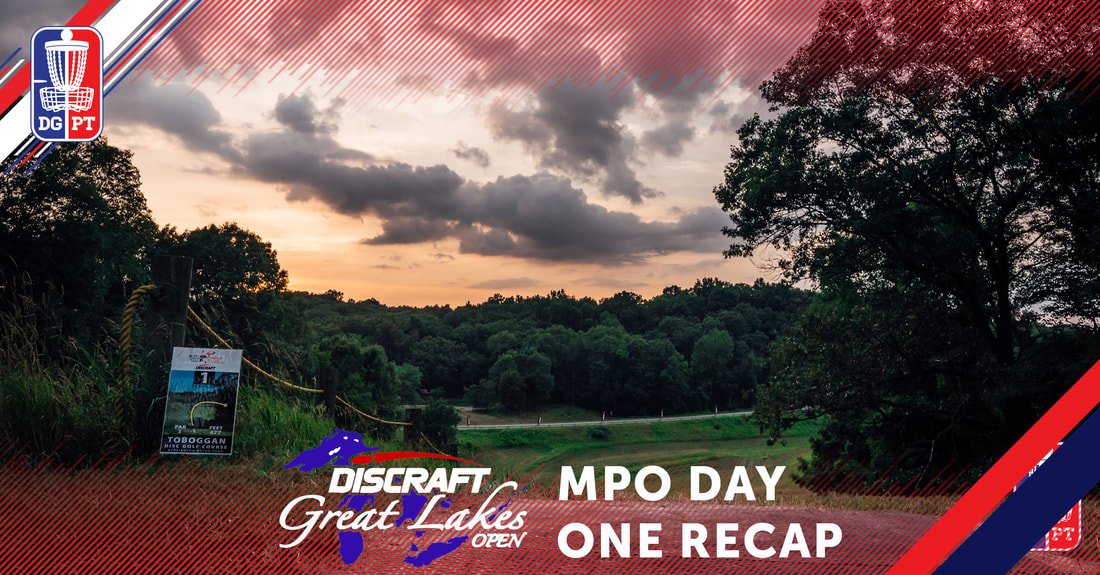 Day one is in the books for Discraft’s Great Lakes Open. While the weather was hot during practice this week, the scores were what ended up being hot today. With a breezy 75 degrees, the scoring conditions were perfect.
Kevin Jones was the first hot round of the day. He finished third in the fan vote which landed him on the Central Coast card along with Ben Calloway, Jeremy Koling, and Austin Turner. After the round, Kevin was stoked to be the leader in the clubhouse, and when asked about his round, he was pleased with his -11 but felt like he could do better tomorrow given the same conditions. When asked if he knew what course record was he responded: “Since there are three new tees on the course, I believe this is the new course record.” Kevin has been chasing a solid Disc Golf Pro Tour performance all season and has set himself up well for a solid moving day opportunity here at the Toboggan course.

Dave Feldberg is also tied for first and had a clean round just like Kevin Jones. Feldberg made it to his -11 a little bit differently than Kevin Jones, only taking the birdie on hole two (Kevin eagled it), then grabbing 8, 13, and 14 where Kevin caught 5 and 11. This means, just like Kevin indicated in his interview, there are many different ways to score here at Toboggan, and if someone had a hot round, they could easily score -15 or -16.

Paul McBeth is our final pro tied at the top in the men’s field. Paul was on pace to land around -14 but scored a par on 17 and took an uncharacteristic OB bogey on the final hole of the course to finish the day at -11. Hole 18 is the only hole at the event with OB, and Paul’s sidearm drive never had a chance to make it back in bounds. Paul grabbed birdies on holes 6, 9, and 12 all of which were holes that neither Dave or Kevin were able to get which shows how exciting tomorrow is going to be watching all three of the lead card.

Just outside of the lead are Nikko Locastro and Cale Leiviska. Based on PDGA number Nikko will be rounding out the lead card tomorrow.

Notable mentions from across the MPO field include Grady Shue, Corey Ellis, Bobby Musick, and Drew Gibson all of whom will be on either chase or third card tomorrow. Also worth mentioning is Charlie Goodpasture who came in around the same time as Kevin Jones early this morning with a -7.
The play was exciting to watch here during round one of Discraft’s Great Lakes Open. Round two is shaping up to be an even more exciting moving day. You will not want to miss out on the show tomorrow; we will be live at 3:15 PM ET with the MPO card, make sure to tell your friends and tune in to watch.