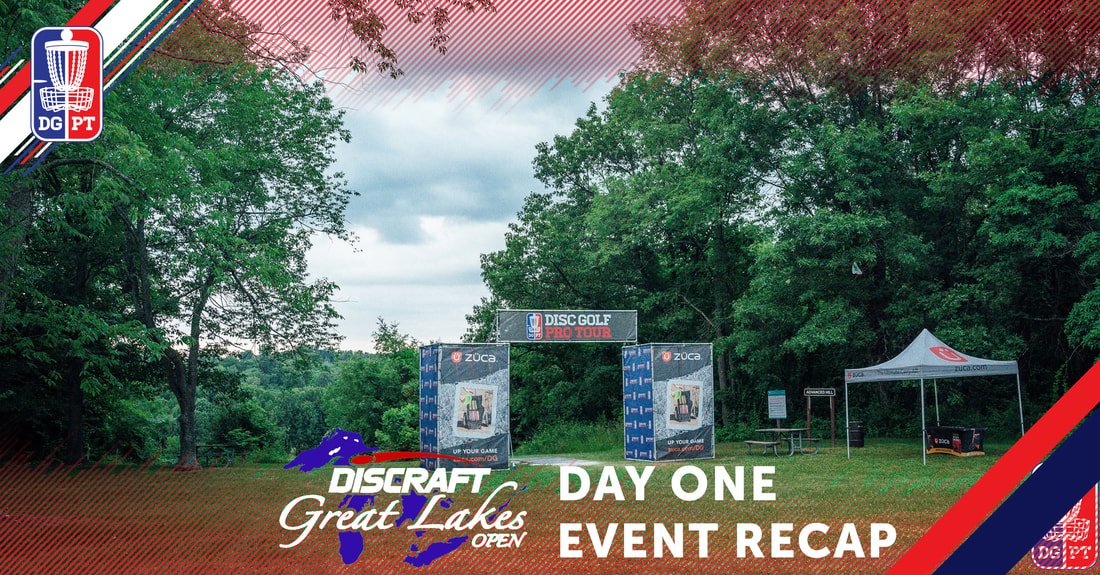 DGLO Day One Event Recap: Fireworks all around

Even though July 4th was a couple of days ago, there were still fireworks going off at The Toboggan Disc Golf Course .
The Great Lakes Open is not a new event. 2018 is the first year the DGLO has made it onto the Pro Tour. Resulting in a stacked field due to its popularity. Finally, there is a reason for the best players in the world to compete at The Toboggan.

And compete they did!

In the MPO field, we witnessed 46 players with a rating of at 1000 go at it. And the FPO division is stuffed with 28 competitors, a large number of females.

Not only were these disc golfers competing against themselves, but they were battling the course. Famous for its rolling hills, tick-infested grass, and humid climate, The Toboggan smelled blood in the water. Everyone got a bit. But some players came out better than others.

Let us take a look at some stand out performances:

Check out all of the stats on UDisc .
Jessica sits on Top Taking advantage of a wide open field was Jessica Weese. Weese entered the clubhouse shooting a 59, which is two under par. Her 59 was an official 971 rated round. It is safe to say that any female competitor coming in under par is likely to have had the hot round.

Jessica managed her fantastic round by hitting the fairway 47% of the time. That may not sound very high, but a course with brutal natural O.B., every percentage point matters. Weese also shot 94% inside of circle one.

Hot on the heels of Weese is Sarah Hokom. Sarah came about her par round in a very different way. The stand out stat is 92% scramble. So 92% of the times when Hokom was not on the fairway she was able to “scramble” and get her par. Even though she is sitting at second, a scramble percentage like that at Toboggan has to be a storyline!

There were three female competitors tied at third: Rebecca Cox, Holly Finley, and Ellen Widboom. These ladies each shot a 62, which is still a great round here in Michigan.

MPO tackles Toboggan Paul. McBeth. Have you heard of him?

If you or someone you love has never heard of Paul McBeth there are a few things you should do: 1) take a deep breath. 2) Watch the first round coverage of the Great Lakes Open. That will tell you all you need to know about the four-time world champion.

Paul started his round hot. By hole 13 McBeth was already in 3rd place, even though the majority of the field had already finished their rounds. And by hole 15 he tied the leader.

Unfortunately, he couldn’t keep it up. A disappointing par on hole 17 and a harsh OB penalty on the final hole brought McBeth down to a “human” 52. But one thing is for sure: the way that Paul tore up this course should strike fear into his opponent’s eyes.

There were other standout performances as well.

World Champion David Feldberg finished round one with a 52, 11 under par. This round earned Feldberg a 1060 rated round. Dave didn’t miss any chances to score. He came in with 100% inside of circle one and a perfect scramble percentage.
A new but recurring face on lead cards is Kevin Jones. The question for Jones is can he continue his stellar play throughout the tournament?

The final face we will see on the lead card in round two is Nikko Locastro. We have not seen Nikko on the Pro Tour very much this year. So we are thrilled to see what the fiery guy will do!

Make sure to tune in tomorrow at 2 PM ET for FPO coverage and 3:15 PM ET for the MPO.