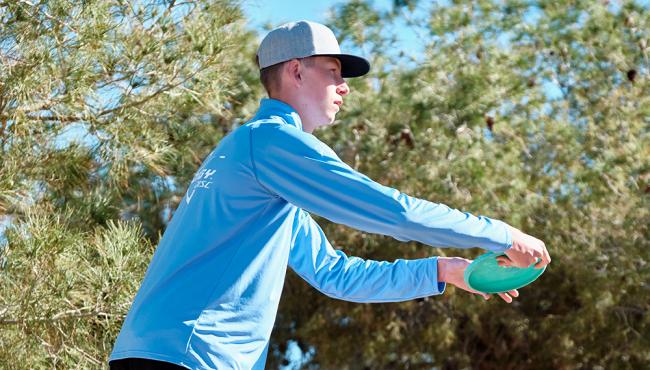 By Baker HeltonMarch 4, 2022No Comments

His name on top of a leader board that was changing at a rapid pace, Gannon Buhr stepped up to hole 14, a reachable but tricky 433-foot basket, and chose to lay up his drive.

It was a smart move for the 16-year-old who finds himself with a three-stroke lead with 18 to play at the DGPT – Las Vegas Challenge presented by Innova.

Buhr’s stellar play elsewhere, including an ice-in-his-veins showing on the putting green, made the decision on 14 that much more impressive.

“It feels amazing,” Buhr told Terry Miller of the Disc Golf Network. “I just played consistently the whole day. I made a few outside of the circle putts. It honestly felt pretty routine and there is always room for improvement.”

Buhr, who shared the lead entering the third round at the Factory Second course on Saturday, connected on five putts from Circle 2 in a bogey-free, 10-under 51 to move to 29-under for the tournament heading into Sunday’s finale back at the Innova Course at Wildhorse.

But the field is coming, and full of heavy hitters.

Eagle McMahon and Drew Gibson are tied for second place, just three strokes back. Tristan Tanner, who turned in the hot round on Saturday of 11-under with Scott Withers, rounds out the lead card at 25-under, tied with Ricky Wysocki and Anthony Barela.

Tristan Tanner had one of the hot rounds on Saturday to jump to the lead card. Photo: DGPT

“Stay confident,” Buhr said. “I’ve always been intimidated by some of the better players in our game, but knowing that I can compete with them for three rounds in a row now means the world to me. I think I can continue that tomorrow by staying confident and making some big putts.”

It’s worked out so far for for the two-time PDGA Junior World Champion who, at 16, is eyeing his first Elite Series win.