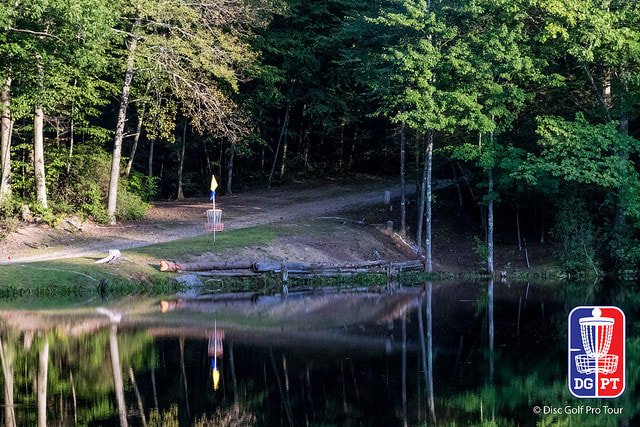 Crowded at the Top: MPO Round 1

The Vibram Open at Maple Hill began its first round today and the men wasted no time attacking the course. With a setting as demanding as Maple Hill, it was crucial that
the players start off on the right foot. Whether you are an aggressive, take no prisoners, competitor or a conservative strategist waiting for your moment, one thing is for sure, the Maple Hill course is tough. It will only allow so many breaks before your score begins to climb. The best of the best disc golfers battled each other as well as the course to make their mark early.
James Conrad is a player that has come into his own in 2017. Coming off of his recent win at the Idlewild Open, James is dialing in his game to an incredible degree. He was able to avoid first round jitters, making no bogeys on the front half of the course while  adding two birdies. His clean start set himself up for a solid round. The only misfire that showed up on his scorecard was a bogey on hole 16 . What stood out for James in the first round was his high scramble rate of 86% , ranked fifth in the field. Also, what James didn’t do was go out of bounds! Those stats combined with a sparking circle 1 rate of nealyr 90% put him in the hunt after his first eighteen holes. James finished in a tie for third place with a six under par.

Cale Leiviska has been doing well at the Vibram Open for years and even snagging victories in 2007 and  in 2012. Perhaps it his impossibly straight drives that give him an edge in and out of the woods. Whatever the reason, Cale knows how to win at Maple Hill and he showed off his accuracy today by grabbing an ace on hole 4. (Philo Brathwaite also aced hole 14) Without the ace, his first nine holes would not have been pretty. He unfortunately mixed in three bogeys before setting things right. His back nine, on the other hand, was a thing of beauty. He dropped in five birdies, and seven total for the round. His circle 1 putting seemed to do the trick as he finished with a six under par and tied for third place.
It seems like Nikko Locastro always comes alive at the Vibram Open. He won the title back in 2010. His talent for flex shots, that he uses to perfection, are a definite edge through the wooded holes. Nikko tore the course up with eight birdies. More importantly, he left himself in a good position to enter day two safely within the pack. Will he make a move on day two? With a solid six under par and placing third, he could make magic happen.
Nate Sexton took a bit of time off from The Disc Golf Pro Tour to welcome a new addition to his family. His last DGPT event was a fourth place finish at the Nick Hyde Memorial. Today Nate didn’t  seem to miss a beat. With only two bogeys on the day, he played a smart round, scrambling throughout the first nine holes until he found his groove and lit the course on fire. With eight birdies in all, Nate sits high atop the crowded leaderboard with a six under par, and right where he wants to be.
Gregg Barsby isn’t done with this season yet! He’s a player that has found his stride. If there is a course that Gregg is built to play it is Maple Hill. His backhand/forehand skills are perfect for the woods and even his straddle putt may come in handy with the uneven terrain. The combination of his scramble rate and circle 1 putting launched him to the top and now has an opportunity to make some moves as the event progresses. He finished his round six under par in third place. Can he leave some players behind on day two?
Michael Johansen didn’t play a flashy round today but what he did achieve was only carding one bogey using one of the highest scramble rates (90%) to stay in the thick of the hunt. His brilliant putting also gave him an edge and allowed him to grab seven birdies and complete his round with a six under par in third place.

Nicholas Masters from Jacksonville, Florida may not be a household name but if he keeps up his good play he just may. With nine birdies for the day, Nicholas played great golf with the help of a 100% circle 1 putting rate that made him deadly at the short game. Will Nicholas stay in contention after the first round? We will just have to wait and see, but for now he is sitting in first place tied with Ricky Wysocki at seven under par.
Ricky Wysocki is back playing at a Disc Golf Pro Tour event and it didn’t take long for the tour point leader to throw down some low numbers for the day. The front nine of Maple Hill has been a thorn in the side of most disc golfers in the first round, causing the scoreboard to light up with heavy numbers. Ricky was relatively unscathed through the first half, carding a lone bogey. He soon raised his game to the next level the rest of the way converting six out of nine birdies to finish with a seven under par to take the lead alongside Nicholas Masters.
The first day of the Vibram Open at Maple Hill was as close as it could get! Although the players are still jockeying for position, many competitors have made a great statement the first round. Our co-leaders are Ricky Wysocki and Nicholas Master with a seven under par. But honestly, the real story was the six under par, six-way tie between Nikko Locastro, Gregg Barsby, James Conrad, Nate Sexton, Michael Johansen, and Cale Leiviska. A quote from the great Gene Wilder comes to mind. “The suspense is terrible! I hope it lasts.”
The feature card for round two at the Vibram Open will be Ricky Wysocki (-7), Nicholas Masters (-7), Nikko Locastro (-6), and Gregg Barsby (-6).  Who will move away from pack and try to make some distance? With this much competition and close numbers it is truly anyone’s guess. Tune in tomorrow for live coverage of round two (3:30 ET), live scoring from UDisc , and daily recaps on DGPT.com . Don’t miss a moment of this action!