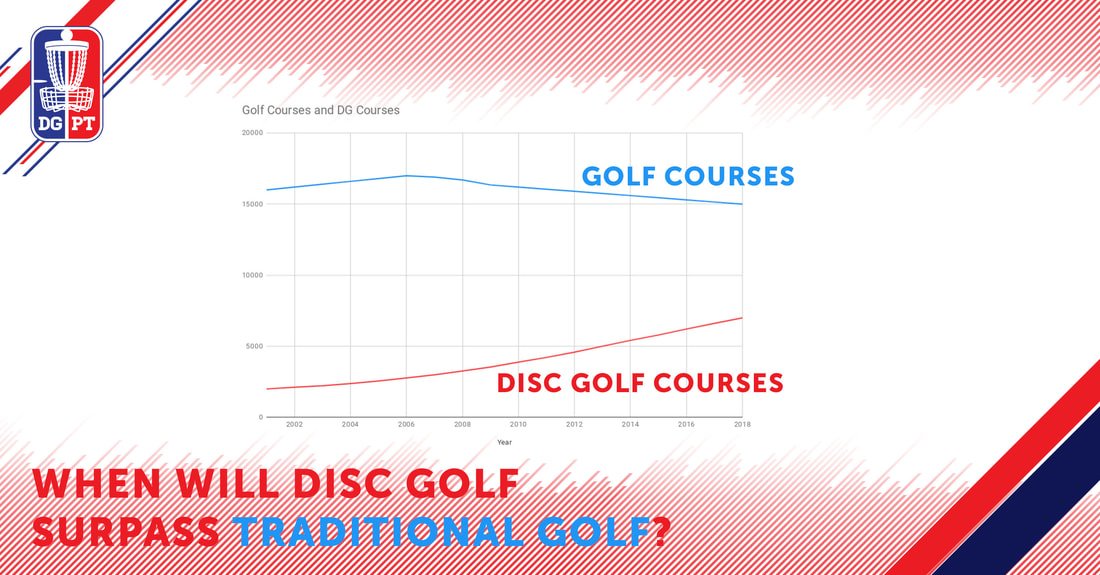 Disc golf is where conventional golf was in the 50s. We are experiencing tremendous growth, the professional side of the game is being developed, and youngsters ​
all over the country (and even world) are learning the sport and seeing it as a legitimate option for their life sport. From the late 50s to the early 70s, golf exploded, with the number of courses increasing by 300 to 400 every year. Disc golf is seeing tremendous growth like this as well. With the additional attention that the disc golf media (and more and more mainstream media) is giving to the sport, our growth will only continue. The sport takes less than half the land of a traditional golf course, it costs much less to maintain, and gives great potential for return on investment. This boom in our sport, which until now has been fueled almost entirely at the grassroots level, will not only continue, it will speed up.

Source: Expansion of Golf Courses in the United States Darrell E. Napton and Christopher R. Laingen
In the USA, the number of golf courses has been in decline for close to a decade, peaking at over 17,000 in 2006. According to the National Golf Foundation , this is ” indicative of the market’s healthy self-balancing of supply and demand, and a trend we expect to continue for several more years.” Another way of wording this is … not enough people want to play golf to support the over supply of courses. Today, there are less than 15,000 golf courses in the USA. In the next decade, this number could fall to 14,000 or lower.

Meanwhile, disc golf has seen constant growth for the past 40 years. The day will come when disc golf surpasses golf in numbers of players and courses. The only question is when.

New disc golf course installs, 2003-2017. Source: DGCourseReview
From 1980 to 2012, the number of new disc golf courses continued to grow at a tremendous rate (10-20% growth year over year). As a sport grows, this growth rate is unsustainable. Happily, disc golf has reached the next phase in its evolution. In the past five years, this number has leveled off at about one new course per day, about the same level as golf in its heyday of the 60s, right around 400 courses per year.

As disc golf continues to mature, more parks and businesses are coming to disc golf about putting in courses. The paradigm is shifting. As it does, our growth has temporarily leveled off but the pieces are in place for the growth to once again speed up. Bearing in mind the minimal costs (relative to traditional golf) to install a disc golf course as well as the amount of land needed (1/2 that of a golf course), disc golf could expect to approach 700 courses per year or more for nearly a decade before we even sniff saturating the market. Especially if more and more of these courses are private or pay to play.

Percent of New Disc Golf Course Installs that are Private and/or Pay to Play, 2003-2018. Source: DGCourseReview.
Over the past 15 years, the number of private and/or pay to play courses has increased 5% from 17 to 22%. This trend has continued from 10% in the 90s and the higher this percentage, the more sustainable the growth of disc golf becomes.

​ ​At a basic level, extrapolating from this linear growth, it is easy to estimate that the number of disc golf courses in the USA will gain on golf at a rate of approximately 500 courses per year for the next decade with disc golf gaining 400 courses and golf losing 100 courses. This would put the year of disc golf surpassing golf as 2034.

For us, this seems like a worst case scenario (note: we are biased towards disc golf and would like to see it recognized as conventional golf sooner rather than later. 🙂

The Pro Tour, the PDGA’s educational programs, and disc golf media will continue to grow and improve. More and more parks, land owners, and golf courses will look into installing disc golf courses. It is easy to foresee another spike in the growth of the number of courses, perhaps approaching 700 per year.

Additionally, with the average age of traditional golfers exceeding 60, the current sponsors and benefactors of the sport may start to look to growth sports in a similar vein, like disc golf. Golf’s decline could actually speed up, perhaps losing 200 courses per year in the USA. These two numbers (+700 disc golf courses and -200 golf courses per year) would put the year at 2027 as the year disc golf has more courses in the USA than golf.

The Magic Year
Realistically, it is probably some number in between these two (2027 and 2034). Either way, if disc golf, in its first 50 to 60 years, can grow and surpass golf in the number of courses, this sport is headed in the right direction and is well on its way to becoming a sport that millions of people all around the world enjoy. And watch. Congratulations on being an early adopter. We suspect you are about to be joined by the early majority, and then the quality of courses will really take off – and the growth of the sport will truly be spectacular.

The really fun question is, will the number of disc golf players surpass the number of golfers before this. The answer: maybe it will.
​
Bring a friend to the course, invite them to a Pro Tour watch party, or just send them an amazing highlight clip. The more awareness people have, the more interested they will become.

What year do you think disc golf will catch golf?