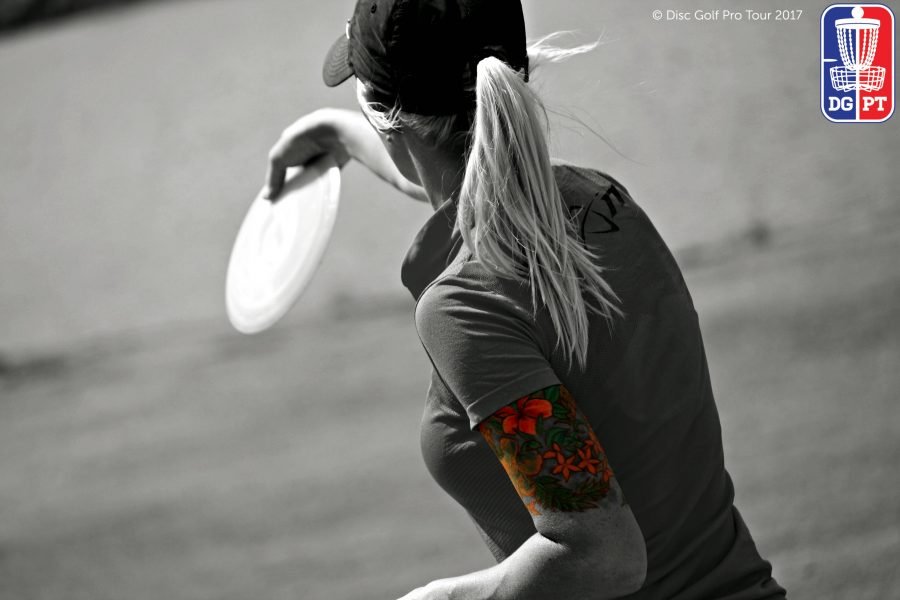 Moving Day for the FPO division has come to a close and Sarah Hokom is no longer alone in first place. Keeping it clean and throwing not only the hot round of the ​
day but the hot round of the week was Catrina Allen, who has climbed four strokes from third to tie Hokom for first. With nasty weather predicted for the the final day of the Nick Hyde Memorial Powered by Innova and Hyzerbomb, disc golf’s top players needed to make some moves today knowing that a bad storm can make the unlucky round that ends what could have been a great tournament.
Pierce and Hokom spent most of the day dueling. Both players held and lost the lead numerous times throughout the day including some dramatic back-and-forth two stroke swings. While the leaders battled it out Catrina Allen went to work. With only three holes left in the day, all of which in the top five most difficult holes on the course, the round was far from over. The three top competitors handled hole 16 professionally, including an impressive 49 ft, circle 2 putt from Paige Pierce.
Then the lead card arrived at the 888 ft. par five, hole 17. The top four competitors carded dramatically different scores today – Four, five, six, seven. It was Jennifer Allen who picked up the birdie, Catrina Allen who saved par, Hokom who took a bogey with an OB penalty, and Pierce, who just couldn’t put the scramble together, took the double bogey seven. With only one hole left to play, Catrina Allen had converted a four stroke deficit into a first place tie. All that stood between her and holding that tie with Hokom headed into the final day was 485 feet of airspace over the pond and into the iconic tournament layout closing basket in front of the gallery. In true lead card form, all four players finished their second round with solid pars and hole 18 remained unbirdied by the FPO division this week.
Our fourth lead card competitor isn’t out of the running yet. Jennifer Allen finished the day six strokes behind the leaders. With wet and windy weather expected tomorrow it is hard to say what will be impacted more. Will strong winds and heavy rains force more conservative lines off the tee pad? Or, will wet putters and windy baskets stir the top pros’ nerves on the greens? Generally we don’t see the hottest rounds of the week on these bad weather days. Expect more OB throws to require the players get creative with their recoveries. It won’t come down to scramble exclusively, but Catrina Allen’s first place ranking when it comes to saving par could be what seals her first DGPT win of the season. Find out tomorrow as the Nick Hyde Memorial Powered by Innova and Hyzerbomb continues.