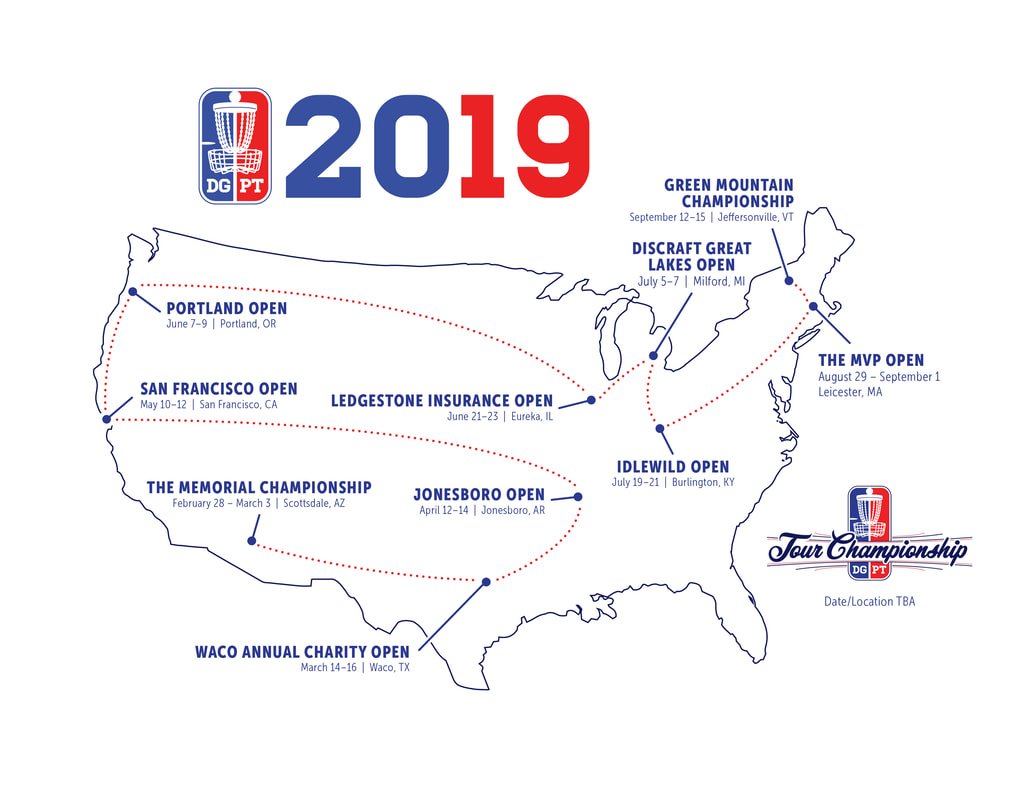 With much fanfare, we are excited to announce the 2019 Disc Golf Pro Tour Schedule. The release of the 2019 Disc Golf Pro Tour schedule coincides with the release of the 2019 PDGA Majors and National Tour Schedule and provides TDs with the opportunity to see what dates are available for A-Tier requests. For the fourth year in a row, the Disc Golf Pro Tour has expanded on its commitment to creating a geographically sensible tour. By working with the PDGA on scheduling professional events across the nation we continue to minimize average travel time between events.
The Disc Golf Pro Tour is excited to continue offering quality events for our fourth season in 2019. We have been working all year diligently to plan with our TD’s for the next season and talking with prospective events on what it takes to be on the Disc Golf Pro Tour. In 2019 we will see a return of tour stalwarts and the addition of one new stop that is sure to become a tour favorite. Additionally, in 2019 Pro Tour events will see an increase in the minimum amount of added cash at each event.

The first three events for the 2019 Disc Golf Pro Tour come out hot and heavy. We will start the season again at The Memorial Championship in Scottsdale, Arizona on February 28 – March 3. This event will come directly on the heels of the first National Tour event in Las Vegas. This year The Memorial will feature one distinct change, players will play the first two rounds at Fountain Hills and rounds three and four at the Vista del Camino course. The second stop on tour will be the Waco Annual Charity Open March 14 – 16. TD Ryan Draper and crew are excited to welcome the Tour back to ‘The Beast’, a course where players are challenged both in accuracy and distance. The final stop of the first leg of the Pro Tour will be at the Jonesboro Open April 12 – 14. Disc Side of Heaven is a course favorite for the touring Pros and a great place to finish the first portion of the 2019 Tour. The first three events of the season on the Disc Golf Pro Tour represent a southern swing as we prepare for the West Coast Swing.

After the first three events, the tour will take a brief break for Bowling Green Ams and the Glass Blown Open before it moves over to the middle part of the season.

The West Coast Swing will gain some legitimacy this year as a five-week tour that will make sense for any local pro looking for a taste of the Pro Tour life. On the west coast, the Disc Golf Pro Tour will bookend two National Tour Events. The west coast swing will begin at the start of May (10-12) in San Francisco at the picturesque Gleneagles Disc Golf Course. Then the tour will take a three-week hiatus for the Masters Cup, Beaver State, and a Pro Tour test event at Lake Tahoe. The west coast swing is capped by the newest addition to the Disc Golf Pro Tour event, the Portland Open (June 7-9). The Portland Open may be new to the tour but it will be TD’d by recent Pro World’s and Green Mountain Championship TD Jeff Spring and supported by assistant TD’s Dustin Keegan and Zoe Andyke. Make sure you are ready for some chill vibes, and great disc golf come May-June.

The Midwest Swing will feature three events that have quickly become favorites on tour for various reasons. At the end of June (21-23), the Pro Tour will pick back up in Peoria for the Ledgestone Insurance Open. An event made famous by its stellar payout. The tour will then shift over to the famed Toboggan course for Discraft’s Great Lakes Open, July 5-7. The Midwest swing wraps up with the Idlewild Open July 19-21. Players will decide between playing Idlewild for Tour Points or going to Europe to play The European Open and for some, the prestigious President’s Cup.

As has become standard, the Disc Golf Pro Tour will wrap-up on the east coast with two four day events. All this after a month off for Pro World’s (Peoria, IL) and the Delaware Disc Golf Challenge. After players compete in Delaware, they will travel to Maple Hill for the MVP Open August 29 – September 1. The Tour will then turn north to Smuggler’s Notch, Vermont September 12 – 15 for the Green Mountain Championship which will return to the schedule after taking a year of to host Pro Worlds in 2018.

The Disc Golf Pro Tour is excited to announce the 2019 season. It is clear that disc golf is growing and we are happy to play a role in the sustained growth of the sport. Make plans to tune in for the season climax, the Tour Championship hosted by Prodigy October 18-21st.