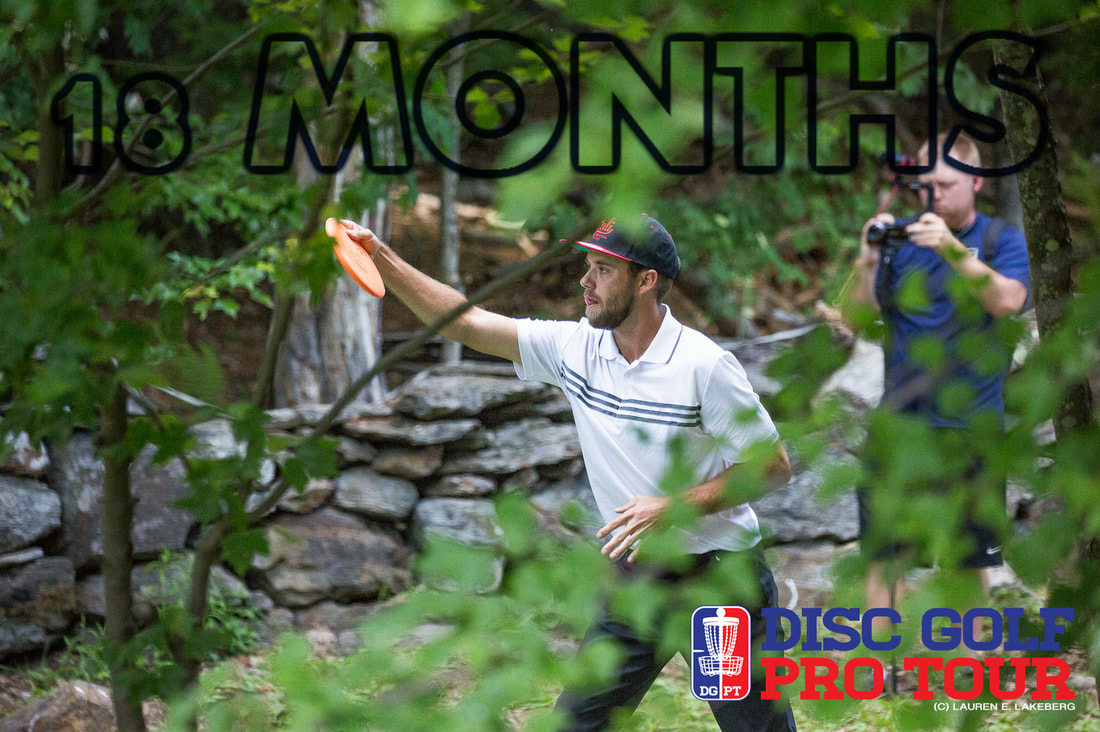 I was not there. I did not see what went down. With the exception of Bradley’s version, the story recounted is similar. Viewed only in the context of Bradley’s previous actions, a stiff punishment is clearly warranted.
However, context matters.
Before this action, Bradley Williams was on probation with the PDGA. At a previous event, Bradley had kicked over a basket – apparently it spit out a putt that was important to him. For this, Bradley was suspended. When his suspension ended, he was allowed to play PDGA sanctioned events, but he was on probation.
As myself and many players on the Pro Tour can attest, Bradley has been a pleasure to watch and has successfully controlled his clear negative emotions at times when, in the past, he would have acted out and caused a significant disturbance. He has clearly demonstrated that he is making an effort and, until this incident, he has been succeeding.
The disc golf culture that I admire and preach about almost daily embodies peace, love, understanding, listening, acceptance, grace and, I like to think, forgiveness. If Bradley was not making any efforts to modify his behavior, then, following the culture of the discs guidelines, this action by the PDGA, while a bit draconian for the charge, is warranted.
The problem that I see, and this is just my opinion after talking to a few of the primary people involved, is that he clearly was making positive strides. To make an analogy, if an addict recognizes their addiction, puts people and processes in place to help them overcome their addiction, succeeds for quite a while, then, in a bad moment, fails, how should society react? How should their friends react?
As a friend, as a disc golf body, our goal needs to be to foster success, on and off the course.
Having seen a similar situation in my life, I can confidently say that pushing them away, and telling them they are bad and not wanted is going to make the situation harder to overcome. While not opening ourselves up to being taken advantage of, we need to embrace Bradley, let him know that we see the positive strides he has made, let him know that this type of behavior is not acceptable, and give him a fitting punishment along with the acknowledgement that we believe in him and accept him (and even like him :-).
Bradley knows that he did wrong. He also knows that he has been working to improve and that this one hiccup does not change the fact that his efforts, for the vast majority of the past year, have reaped great rewards. The PDGA, in my opinion, failed to recognize that there may be mitigating circumstances – that this incident does not define where Bradley is now – when determining a just punishment.

With the Bradley Williams suspension, things just got real.
The other contextual point that I think the PDGA failed to consider is the growth of the pro side of the sport. With the advent of the Pro Tour and the World Tour, many more players are now able to – or at least attempting to – make their livings playing disc golf professionally. Bradley Williams is one of these people. In the past, he has played local (Texas) events and done very well. This year, he committed to touring professionally. Additionally, he clearly put much effort into taking charge of his emotions and not letting them get the better of him.
Kudos to him for taking on both tasks at the same time and succeeding on both counts more than anyone dared to imagine he would.
Until this suspension, the PDGA’s disciplinary process has come under relatively little outside review. The vast majority of players are suspended due to actions taken a smaller local events. The players are not well known and the suspensions don’t matter much except to tell these players that they should play in their local monthlies rather than PDGA events. This serves a good purpose and I suspect is done well. The level of decorum at a PDGA event should be higher than at a local monthly. The PDGA brand matters and should be respected.
However, while the vast majority of disciplinary actions are relatively local and insignificant, this action has taken away a player’s ability to earn a living. With the possible exception of Cam Todd in the early 2000s, this is the first time that a disciplinary action has had this type of impact. From the outside looking in, it seems that this type of first time action should be taken very seriously. We used to be kids playing with lunch money. Now we are adults, at our first job, and we have rent to pay.
I’ve talked with both parties involved and the stories are similar, except the intent that started the altercation. I’m not comfortable rehashing it here as I do not think it is my place, but suffice it to say that Bradley recognizes that his actions were unbecoming of a professional athlete on the stage of our sport’s largest payout ever.

Bearing in mind Bradley’s past issues, his clear efforts at improving, his failure to control his emotions in this instance, and the fact that we now have professional disc golfers, this is a very difficult decision.
The interesting thing about this altercation is that it is actually easy to see the direct fallout. The altercation happened and the following player, whose performance was quite possibly negatively affected, threw his next two shots out of bounds. In the tournament scenario of stroke and distance, this literally cost him four strokes.
I recognize that I sometimes make things too simple, but a clear option of punishment, would be for Bradley to forfeit his earnings of $950. Next, I would directly compensate the other player $260. This is the amount he would have earned without those four strokes. Additionally, I would take the difference ($950-$260=$690) and donate it to St. Jude, the charity of choice for the PDGA. Lastly, I would add 12 months probation onto Bradley’s current probation. This type of ruling sets a precedent and, as the sport grows and the numbers increase, the significance of the punishment will naturally increase.
This way, Bradley recognizes that this is important, that we know he is putting forth an effort to improve, and that his probation period has been extended so his actions will still be viewed under a microscope. The aggrieved party knows that their point was heard and has been made as whole as possible. Lastly, the PDGA shows that they recognize that the sport is growing up and that they failed to take into account that they were taking away a player’s ability to make a living.