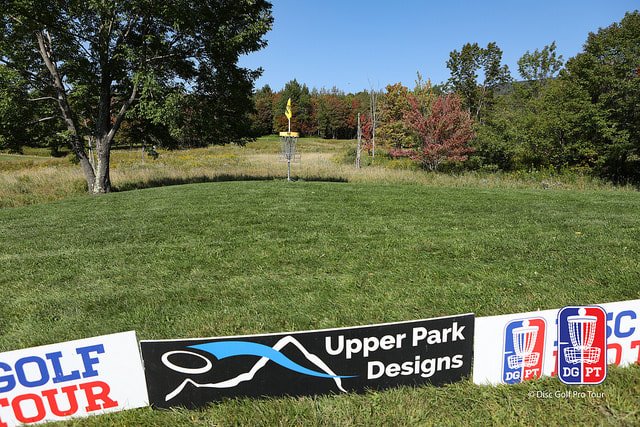 Birdies, Par, and Bogeys from the First Round of GMC

The first round of the Green Mountain Championship presented by Discraft didn’t bring us any aces or eagles but there were plenty of highlights to go around with
birdies being handed out like gifts at a daytime talk show for the men. Below is a look at the best and worst moments for the men and women from round one at Smugglers’ Notch Resort.
Birdies
There were lots of birdies to choose from on Wednesday with some loooooww scores put up by our top competitiors. Often times these low scores were highlighted by birdie streaks with the longest belonging to Eric Oakley and Michael Johansen at seven in a row. Oakley birdied holes four through ten en route to a 12-under par performance where he sits one behind our leaders, Nate Doss and Michael Johansen. Johansen’s own birdie streak started on hole four and ended on hole eleven. The pair was lights out from around the basket all day with Oakley nailing 93% of his circle one putts and Johansen connecting on 94% of his. What was even more impressive was their circle two putting. Johansen hit from deep in three of his five opportunities but Oakley one-uped him, hitting on all four of his circle two putts.
Speaking of birdie streaks, Paige Pierce put up an impressive streak of her own. Pierce, who is tied for first with Sarah Hokom at 5-under, nailed five birdies in a row on holes eight through twelve. This included two park jobs on holes nine and ten where Pierce was able to just tap in for birdie. Pierce could have crafted out an even lower score if her putter would have caught some fire. Paige missed on three of her connections from inside circle one and couldn’t connect on any of her four circle two putts. If Pierce finds her putting stroke the rest of the week, you could see an even higher negative number by her name.
Par
Diving deeper into our UDisc hole stats, we can see which holes played the easiest and the most difficult in relation to par. At Brewster Ridge, for the men, holes 15 and two proved to be the most difficult holes in relation to par at .33 and .32 strokes above par respectively. On the other hand, the short hole six proved to be a must-get birdie of the round with 64% of the field carding the birdie. In all, the course average 1.53 strokes below par.
Across the way at Fox Run, the women had an entirely different challenge with the course playing a full six strokes over par. The biggest culprit was the 1115 foot hole seven which played a full 1.39 strokes above par. The hole saw zero birdies and a host of bogeys, double bogeys and higher. The women’s must-get birdie came in the way of a par four. Hole 13 saw 50% of the field taking the three, making it a do-or-die hole for the women if they did not want to lose a stroke on the field.
Bogeys
Paige Pierce and Sarah Hokom were mainly writing down birdies next to their name but the pair tripped up on the same hole, both carding double bogeys. The 445 foot, par three, hole five got both women with each of them throwing out-of-bounds on the hole. With one more round to go at Fox Run, hole five will be a hole that could make or break a round for those chasing the title.
Bogeys were few and far between for those on top of the leaderboard on the men’s side. One competitor who had the unfortunate fate of carding one is four time Green Mountain champion, Ricky Wysocki. Wysocki threw OB on hole two for the only blemish on his scorecard. Ricky, who sits three strokes out of the lead, will look to clean up that mistake in round three when the men tackle Brewster Ridge for the second time.
The action continues tomorrow with the men and women flip-floping courses for round two. We will have live action for you starting at 2:30 pm ET from the Green Mountain Championship presented by Discraft.
​