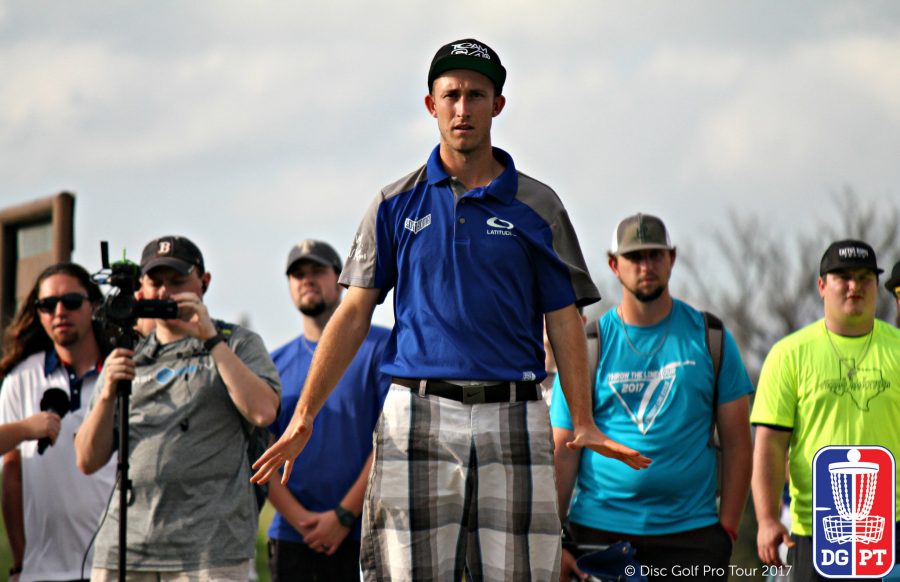 At the start of the Waco Annual Charity Open presented by Dynamic Discs some big names such as Ricky “Sockibomb” Wysocki, Eagle McMahon, and Simon Lizotte joined ​
the feature card on this moderately windy, but beautiful day in Waco, Texas. The pros needed to play accurate, but aggressive, lines if they hoped to park some holes and card some birdies. Although “the bEast” course is considered to be a tough landscape by some, it is also a course that can reward smart players with low scores. The battle here is the constant barrage of narrow lines, especially through the back nine, that more often than not, bat down soaring discs at every turn. The difficulty of the tight fairways took their toll on the feature card as Simon Lizotte began the day with promise, but soon cooled off coming down the stretch. He simply wasn’t showing the spark we are used to seeing from the young phenom who finished eight under par.
Eagle “the vegan” McMahon is no stranger to the Brazo East course coming in second place to Bradley Williams here during the 2016 Texas State Disc Golf Championships. Eagle’s experience helped him make a great start in round one by making some difficult shots and landing 85% of his drives in the fairway. One stand out moment for McMahon was on hole #18 as he drove nearly 609 feet and drained an eagle putt to achieve a feat that will be hard to duplicate. He finished with a ten under par, tied for 4th place.
Another exciting grouping today was Dave Feldberg and Gregg Barsby, each finishing their rounds with a respectable ten under par. These fan-favorites are back in the hunt and the spectators could not be happier with their performances. Dave put together a solid round with a total of eleven birdies and writing down one lone bogey. Gregg birdied eleven times and had a run of eight straight birds on the back nine. These two veterans are well within striking distance and many among the gallery hope to see either of them chasing down our leader and applying pressure. Feldberg has also made it onto the feature card for day two.
The unexpected player to watch today was James Conrad from Virginia. As a 1017 rated player, James showed the crowd what he was made of, carding an eleven under par to take possession of third place. His birdie rate of 61% combined with a near flawless back nine pushed him into contention for round two sitting comfortably two strokes behind Jeremy Koling and one stroke behind Ricky Wysocki.
World Champion Ricky Wysocki started his round mixing more pars into his scores than we are used to seeing, but his game still had plenty of shine. Perhaps most impressive, a long throw-in anhyzer spin putt from over 70 feet out on hole 16 to score a birdie. Perhaps not satisfied with his slow scoring, Wysocki seemed apt to throw very aggressive shots as the holes began to dwindle, needing to scramble on several of them. In the end, Wysocki did what he always seems to do late in a round, grind! Playing inspired disc golf on the back nine, Wysocki shot a twelve under par and grabbed sole possesion of second place.
The talk of the event was the blistering start by North Carolina’s own Jeremy “Big Jerm” Koling. He was loving the front nine with a breathtaking seven birdies and one eagle. Koling went on to shoot a lucky number thirteen under par for his first round and card the hot round of the day. He took the lead early and he kept it! Koling went 80% in fairway hits, 67% in birdies, and a perfect 100% in circle 1 putts this day. Big Jerm has definitely found his stride working his newly sponsored Innova Champion Discs through the woods and showing his loyal fans a mesmerizing glimpse into what the future may have in store. When I asked him about the most consistent part of his game today, Big Jerm responded by saying that, “My forehand was on point today! My midrange and fairway shots in the woods were in complete control.” Saying he was in control is an absolute understatement as he shredded the course and sits comfortably atop the leaderboard with a one stroke lead over Ricky Wysocki.
On day two of the Waco Annual Charity Open presented by Dynamic Discs, the feature card will be Jeremy Koling (-13), Ricky Wysocki (-12), James Conrad (-11) and Dave Feldberg (-10). The competition will be ferocious as Koling, sitting in first place, prepares to make his mark in 2017 by fending off Ricky Wysocki. The Disc Golf Pro Tour’s second stop is heating up! Don’t miss a second of this fight as the best disc golfers in the world face off tomorrow at 3:30 PM eastern.