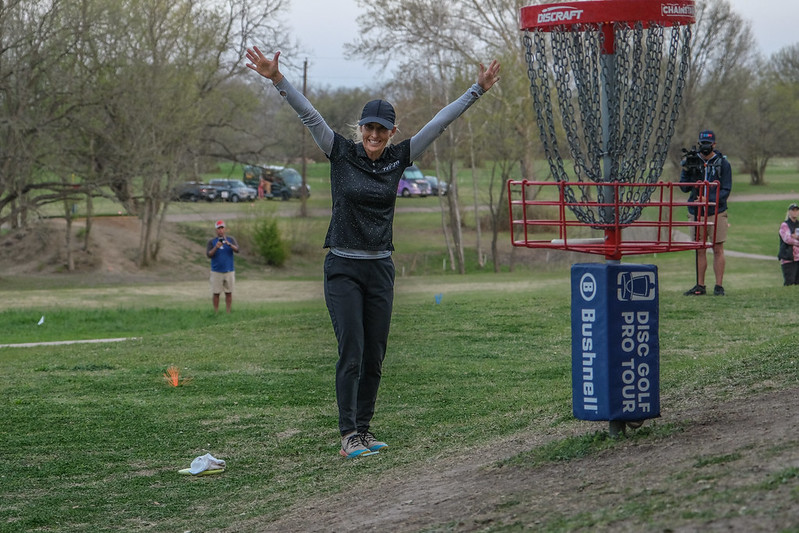 Sunday’s conclusion of the Open at Belton captivated the disc golf world as a two-horse race in both the MPO and FPO divisions shook out at the first DGPT Silver Series event of the year.

Ricky Wysocki and Paul McBeth battled all weekend on the MPO lead card while simultaneously distancing themselves from the rest of the field. After nearly flawless play from Wysocki and some struggles from McBeth around the putting green, the two-time World Champion Wysocki came out on top with an awe-inspiring score of -16 under par! Wysocki’s Sunday score of 47 ties Calvin Heimburg’s course record round from Saturday which boasted ratings 1087 (Heimburg) and 1096 (Wysocki) respectively.

Wysocki’s win in Belton is his first of the year after a 5th place finish at the DGPT- Las Vegas Challenge and an 11thplace finish at the DGPT- Waco Annual Charity Open. While not as valuable as DGPT-Elite Series events from a points perspective, Wysocki’s win in Belton for the first Silver Series event of the year bumped him up to 3rd in the 2021 DGPT Tour Standings trailing McBeth by a mere quarter of a point for 2nd.

Behind McBeth and Wysocki in the MPO field was Calvin Heimburg (3rd) as well as Terry Rothlisberger and Nathan Queen who tied for 4th with solid play throughout the three-day event.

Heimburg’s 3rd place finish at Belton was his 3rd top 5 finish of the DGPT season which is also 3 events deep. The 25-year-old Floridian’s unmatched consistency means he will continue to sit above the rest of the field in 2021 DGPT Tour Standings going into the Vintage Open next month in Russellville, AR. Calvin’s lead over McBeth (2nd in Tour Standings) currently sits at 32.5 points.

Transitioning over to the FPO field, we saw another down to the wire battle, this time between touring veteran Catrina Allen and young gun Heather Young. Young, who many hedged bets on to have a breakout year in 2021, confirmed those predictions with great play all weekend long.

Young shot a career high 1006 rated 58 on Sunday which gave her the lead going into the final few holes. Not only was the 5 under par Sunday round from Heather her first career 1000 rated round, but it was the hot round of the day in the FPO field by a margin of four strokes. It’s unclear if the all-purple attire and disc ensemble are a performance booster for Young, but it is very clear that the Kingston, TN native can put down some world class scores in the windy conditions so famously associated with Texas disc golf.

Despite Youngs late push for the win, ready to strike coming down the stretch was the 2019 DGPT Tour Champion, Catrina Allen. While Catrina struggled in spots during round one, she battled back with an FPO course record 54 (1028 rated) second round. Despite losing her lead with only a few holes to play, Allen finished her tournament with a birdie and a par to capture her first DGPT event win of the year.

Rounding out the podium in the FPO was Missy Gannon whose second round of 58 (996 rated) kept her in the hunt headed into Sunday’s final round. Missy’s strong finish in Belton bumps her into 9th place in the DGPT standings after 9th place finishes in Vegas and Waco.

The Disc Golf Pro Tour will head to Russellville, AR for the next stop on the 2021 Tour. The Vintage Open will take place April 8-10 and will be the second Silver Series event of the season. Scores and stats will be available via UDisc Live, and the final round can be seen live on the Disc Golf Network.