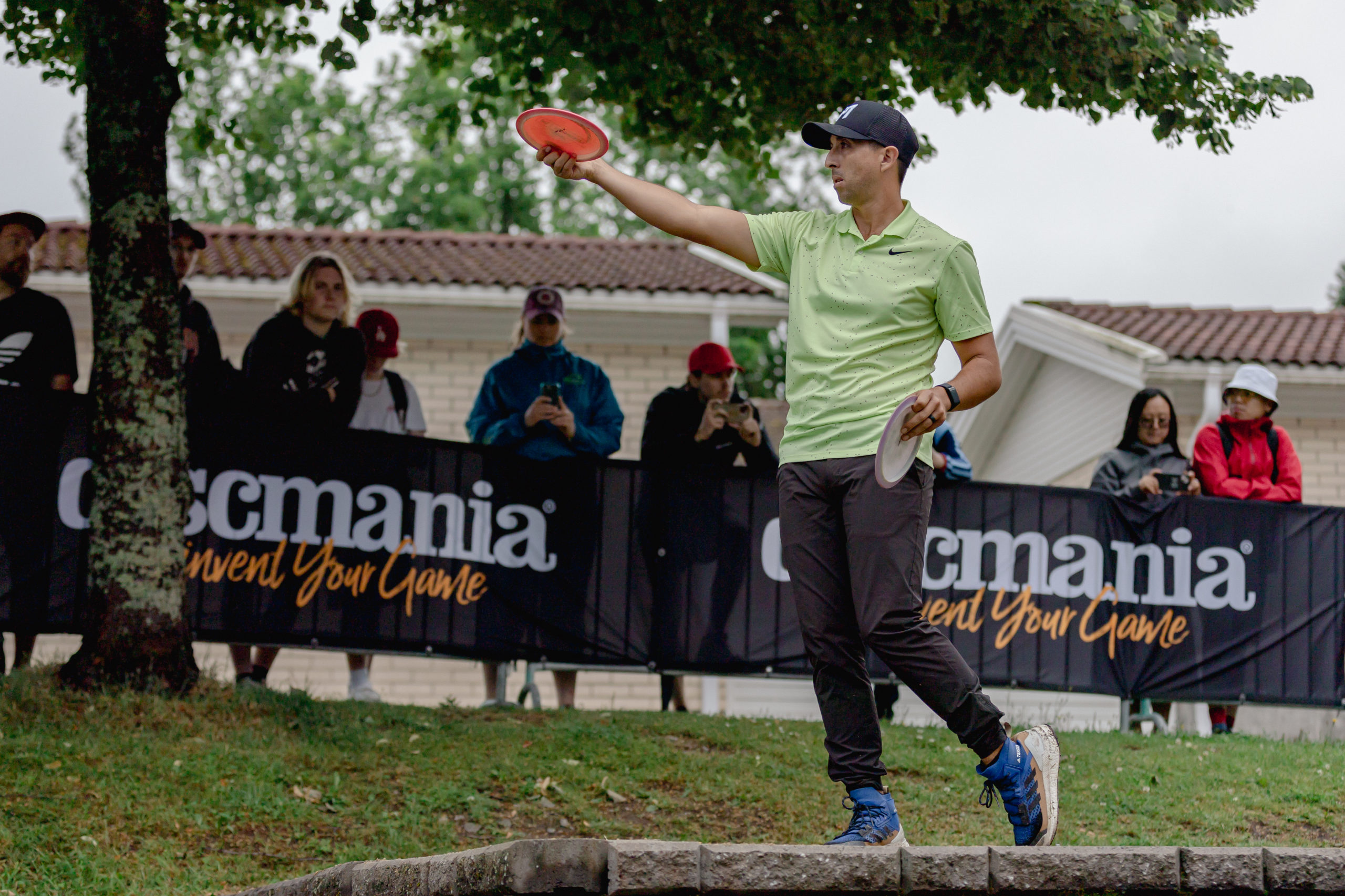 Paige Charges Back Through Rain

Heavy storm clouds loomed over Nokia on Moving Day morning, yet all was quiet on the first tee at Nokia DiscGolfPark as the FPO lead card launched their drives down the trachea of hole 1, straight into the belly of “The Beast.”

Paige Pierce set the tone right off the bat with a fierce Circle 2 putt that echoed across all corners of the park. Unfazed by Paige´s power move, Eveliina also smashed the chains with malicious intent from her own slightly compromised lie 8 meters down the hill by the edge of the shrubbery.

Moving over to hole 2, Salonen went to the sensible play, a wide forehand that nestled safely in easy lay up territory. Failing to draw first blood on the opening hole, Pierce launched an ambitious turnover attack on the pin that did not pan out as planned and delivered her a double digit deficit to Eveliina. So far, so good in the campaign to defend our home soil against the invading forces from the West.

But disaster struck on the fourth fairway when a scrambled shot hung on to Salonen’s hand way past it’s welcome, careening far off course up the steep embankment and into a nearly inconceivable OB. With that, Paige earned both of her errant strokes back and a plus one to boot. As the UDisc official entered the woeful score into his system, the skies opened up and dumped raindrops the size of mini markers onto players and the public alike for a stretch of multiple holes of play. With this, the already treacherous dealer of deadly stroke swings that is “The Beast” launched a full blown fire sale of bogeys and their twin brothers onto the fully suspecting field.

Outside of this power struggle between the matriarchs of worlds old and new, other players hopscotched up and down the leaderboard on squares in all the hues of yellow and orange.

Kat Mertsch found herself in, out, and ultimately in again of the final round lead card without even earning a blue square on the day. Meanwhile Henna Blomroos vaulted both Kat and Cat with the aid of only a solitary birdie, while Allen dropped down to join the chase despite earning two blue squares on the day. Wild scenes, truly.

When the dust settled, the lead that should have remained unassailable in perfect playing conditions, had dwindled down to two strokes. Not only that, but the field got close enough to breathe the rarified air previously reserved for Eveliina only and allowing for feasible wins not just by Pierce, but Blomroos, Mertsch and even Allen should rain remain a factor during the final round.

Nail baiting awaits the Finnish nation coming down the stretch.

Is there even anything relevant to write about besides the raging McBattle? Probably not, but in the interest of fairness we will touch on a couple issues and peripheral points of interest nevertheless.

Calvin Heimburg rose from under the shadow of his former self during moving day´s round three to card a respectable -7 on the day, climbing 19 spots to T11. Ricky Wysocki, however, sank into an ever deeper funk than previous, not moving an inch relative to par during the round, which saw him drop seven spots down to 20th place. An uncharacteristic performance and a worrying issue that fails to garner due attention during the storm of stories emerging out of Nokia.

Young Estonian Mathias Villota sits in 20th place and should finally be receiving some much deserved attention, for he is, in my humble opinion, the future of Baltic disc golf.

Meanwhile, Chandler Kramer remains an anomaly that desperately needs to be addressed, yet I don´t know how to put words to it. He continues to apply odd solutions to problems best addressed by standard practice, and somehow he remains in third place going into the final round despite using the tools of trigonometry to solve simple math problems. Perhaps vying for a guest appearance alongside Sarah Hokom in future PDGA commercials. A stunning performance nevertheless.

Kevin Jones turned in a solid -7 performance to push Niklas Antilla down a notch to the chase card despite his T4. There he will conclude his campaign surrounded by fellow Finns Jesse Nieminen, Vaino Makela, and somewhat unexpectedly, Mikael Hame, whose strong -5 showing saw him pass Lauri Lehtinen who rode the struggle bus to a +1 and a 10th place destination.

Now, to the McBattle at hand.

We have seen these kinds of scenes before. Wysocki vs. Mcbeth is, obviously, the garden variety plot, with the odd display of Paul vs. Calvin unfolding from time to time, or a Wysocki vs. Dickerson bout randomly thrown in the mix to keep our viewers on their toes. The closest thing that comes to mind bearing any resemblance to what we are currently witnessing is the 2017 Aussie Open fracas between Richard and a teenage Wynn who saw them trading 1100 rated rounds in triple digit temperatures under the blazing Perth sun, detaching themselves far from the rest of the pack in the process. That particular altercation saw a fiercely determined Wysocki emerge victorious over McMahon, who faltered only slightly on the final two holes of his best performance to date, barely giving up his narrow lead with an unfortunate OB drive on the last hole of regulation play.

We saw perhaps a bit of this tendency out of Eagle on the last two holes of moving day play when an errant upshot from short range nestled in tester territory, and, ultimately his putter found the ground from Circle 1 for the first time of the day, allowing McBeth to cut a two stroke deficit down to one. The same chain rejection repeated itself on the green of hole 18, tying the two fighters at a preposterous 32 points heading into the final round, a whole 13 strokes ahead of the competition.

Buckle up folks, because today will be a wild ride!