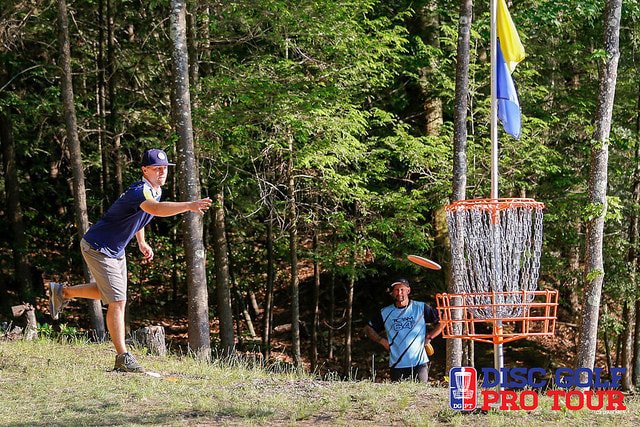 The 2017 Disc Golf Pro Tour season is quickly winding down with just two more events to go before the Tour Championship. One of the shining pillars of the tour is
the stage for our battle this weekend, the Vibram Open. With an amazing course, great competition and battles for seeding ongoing, the Vibram Open looks to be another incredible event on the 2017 slate.
The Vibram Open is anybody’s tournament to win. Throughout its thirteen year history, the tournament has seen a host of different names on top of the leaderboard at the end of the event. Notably missing from the event this year, will be last year’s champion, Bradley Williams. Williams is currently under PDGA suspension and will not be able to defend his title. That being said, there are still plenty of previous Vibram winner’s in the tournament. One of those previous winners that will play this weekend, is the event’s only two-time winner, Cale Leiviska. Winning in both 2007 and 2012, Leiviska will look to continue to build on his previous Vibram success. The two-time champion placed third in last year’s rendition of the tournament and has been playing some good golf in 2017. In the two Pro Tour events he has attended this season, Cale placed fifth (The Memorial) and ninth (Ledgestone), between those events he racked up eight PDGA tournament victories and has added a ninth PDGA victory since the Ledgestone. Although he may not travel outside of his region as much as other top professionals, there is no doubt in anyone’s mind that he can challenge for the title this weekend.
Two names that no one ever should count out in a tournament are Paul McBeth and Ricky Wysocki. Both players have Vibram titles on their resume (McBeth in 2013 and Wysocki in 2015). No one can deny, both players want a solid finish this weekend.
Wysocki has hit a bit of slump, by his standards, and has placed seventh, fifth and fifth in his last three events. With the season winding down, Wysocki could use a statement win to get him back on the beaten path. McBeth, on the other hand, has been playing solid golf and after a near victory at Idlewild two weeks ago, Paul bounced back and won the National Tour’s Pittsburg Flying Disc Open this previous weekend. McBeth wants to prove that he is still the best player in the world and with a string of important tournaments upcoming, it is a perfect time for him do so.
Other names to watch for this weekend include a streaking hot, James Conrad, an always dangerous woods player, Michael Johansen who lost to Bradley Williams in a playoff last year , and 2014 Vibram champion, Jeremy Koling.
This weekend offers a number of opportunities for players to improve in the Disc Golf Pro Tour standings. Whether it’s Nikko Locastro trying to claw his way into the top eight that get a bye in the semi-finals or Jeff Renner trying to find a way to just get into the top 50 and qualify, there will be plenty of intrigue up and down the leaderboard throughout the tournament. As the players battle the course and each other, we will have all the information you need with wall-to-wall coverage including live broadcasts, live statistics from UDisc and recap articles. Be sure to stay tuned in to the Disc Golf Pro Tour as we head to Massachusetts for the Vibram Open.