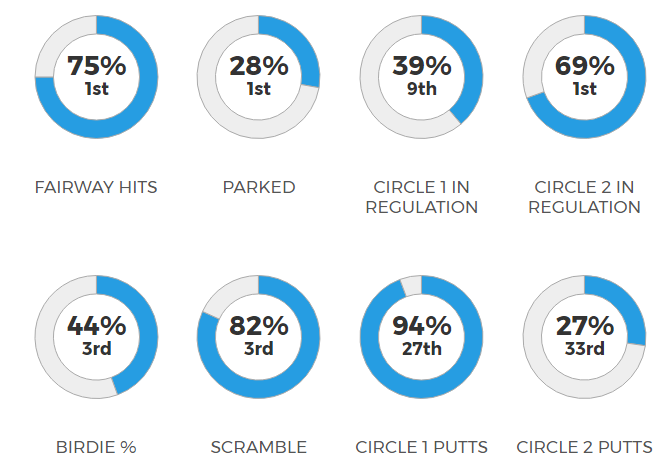 Barsby Breaks Away: MPO Round 2

The second day of the Vibram Open at Maple Hill was all about attempting to spreading the field. The first half of the course during the yesterday became a round
breaker for many players. The goal of all was to make some adjustments from the day before and watch the scores drop. The leaders that started the day didn’t play as aggressive as they could have on many holes. Perhaps they were thinking in terms of a marathon, trying to protect their leads. Many players further down the leader board had the opposite strategy and for their boldness were able to move up toward the leaders. The stat that inevitably makes the most difference at any heavily wooded course is the scramble percentage. When the pros can find a way to overcome a bad shot, more often than not good things will happen.
Nikko Locastro found himself on the lead card today and he took advantage of all of his opportunities. He has the reputation as a risk-taker and the Maple Hill course is full of risk reward routes, but Nikko didn’t give into the temptations through the first nine holes. His discipline paid off with a clean scorecard writing down no bogeys. He may have had some tough breaks but he kept his composure and finished strong with a -11 sitting in fourth place.
Nate Sexton wasted no time making his presence known during round two. Nate got it done with a very hot putter. His circle 1 putting rate was 91 %. Although Nate found a way to keep pace with the leaders most of the day, he strung together a long run of pars on the back nine that didn’t help his cause. He did manage to finish strong with two birdies on the last two holes ending his day with a four under par and -10 under for the tournament.
The movers and shakers on the day were Nate Doss who shot a -6 and climbed up 24 spots. Grady Shue moved up an incredible 29 spots by shooting an eight under par.  The hot round of the day belonged to Grady Shue and your leader Gregg Barsby both with a -8.
If Nicholas Masters felt any butterflies as he started his day with co-leader and number one golfer in the world, Ricky Wysocki, he never showed it in his game. The young Jacksonville player had some bad holes today but always seemed to card a birdie right after. His scramble rate was low 29% but it was his skills with the putter that kept him in front of the other players most of the round. He stood toe to toe with Ricky and did what many other great players haven’t been able to do, come out on top. He battled the entire round with Gregg Barsby but unfortunately went out of bounds on the treacherous 18 th hole and slid to -11 and currently in second place.
Gregg Barsby continued his great play during round two. At several moments the winds raged but that didn’t seem to affect his steady ascent up the leader board. By the time Gregg reached hole number 10 he found his touch, throwing in three birdies in a row. Gregg leaned hard on his straight forehand shots today through the woods and many times he pierced the gaps brilliantly. He finished his round with an impressive eight under par and -14 for the tournament.

The action was incredible today during the second round of the Vibram Open and Gregg Barsby held off the young player, Nicholas Masters. The scores didn’t soar as expected, but the competition was fierce! Gregg Barsby could not be contained on the Maple Hill course. His masterful forehand made all the difference as the other players failed to keep up with his accuracy throughout the day. Another player that found a way to move onto the lead card was James Conrad, achieving this by carding five birdies in his last seven holes.
The feature card for moving day will be Gregg Barsby (-14), James Conrad (-11), Nicholas Masters (-11), and Nikko Locastro (-10). Can Gregg extend his lead on day three? Will Nicholas hold up under the pressure? Let’s not forget the great play that James Conrad has shown over the year. Can he take another DGPT victory? Or will Nikko Locastro add another Vibram trophy to his collection? For all these answers and much more tune in tomorrow for live coverage and see who will come out on top. If you have any plans tomorrow you better cancel them because the competition is heating up! Check out our daily recaps on www.DGPT.com
​