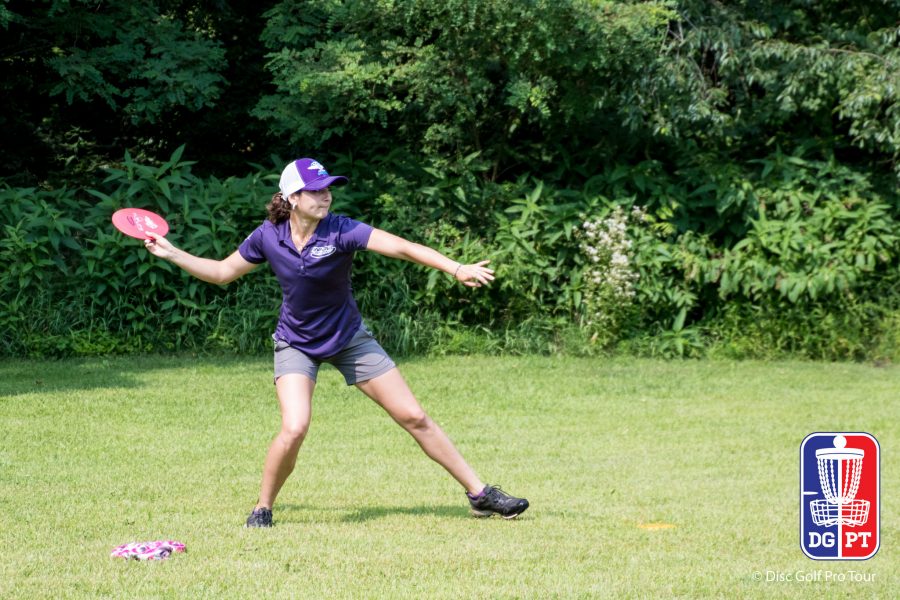 Back and Forth Battle Continues, Weese Leads by One

The back and forth battle between Jessica Weese and Valarie Jenkins showed no signs of stopping after the pair provided yet more fireworks leading to another lead change
on the third day of the Ledgestone Insurance Open presented by Discraft. This time it’s Weese who sits on top of the leaderboard after overcoming her one stroke deficit to Jenkins by shooting a 5-under par, 53 to best Jenkins 3-under par, 55. Another contender also arose on Saturday with Ragna Bygde shooting the hot round of 8-under par, 50 to put her at 11-under for the event and just four strokes off the lead.
Jessica Weese is no stranger to the Northwood course. After shooting a hot, 8-under par, 50 at Northwood, on the event’s first day, Weese had to be relieved to step on the course Saturday. Although she didn’t quite match her performance from Thursday, her performance on Saturday was still impressive, carding eight birdies en route to another quality performance. With friendlier, less windy conditions than Thursday, Weese was able to improve on her 82% circle one percentage and raised that number to 94%. Jessica was able to hit several circle’s edge putts and also added a 38 foot, circle two putt to birdie hole 15. Weese will look to keep her putter hot as the action moves to Sunset Hills on Sunday.
Valarie Jenkins also had an impressive putting performance on Saturday, only missing one circle one putt and knocking down an incredible 60% (3 of 5) circle two putts. The highlight of the day for Jenkins occurred on hole 17. After relinquishing the lead to Weese, Jenkins knocked down a 60 footer to card a birdie and put the pressure right back on Jessica. The positive momentum continued for Jenkins and with Weese carding back-to-back bogeys on holes 17 and 18, Jenkins was able to complete a three hole, four stroke swing after a par and birdie of her own. This swing allowed Jenkins to pull within one stroke of Weese and gave Jenkins all the momentum needed as the action moves to Sunset Hills tomorrow, a course that Jenkins bested Weese on in Saturday’s round.
Out of the two golfers in third place going into Saturday’s round, many would have predicted that it would have been Paige Pierce not Ragna Bydge who would have given the leaders a run for their money. However, it was Ragna who shot the hot round of the day at 8-under par, 50 to pull within four strokes of the lead. After one lone bogey on hole one, Bygde rattled off nine birdies the rest of the round, including a stretch of four consecutive on holes two through five. Pierce, on the other hand, fell off pace shooting 1-over par, in large part to a quadruple bogey, 8 on hole 18. Pierce will find herself in an unfamiliar position on the last day of the event, off the lead card. Instead, it will be Sarah Hokom in the fourth spot after the side-arm specialist shot an impressive 6-under par, 52.
In a year that has oftentimes seen blowouts in the FPO division, this is the tight battle that fans have been waiting for. With just one stroke separating Weese and Jenkins and Ragna Bygde with momentum and just four strokes out of the lead, the finale of this incredible show will be one that you will want to see. Be sure to tune in as the Ledgestone Insurance Open presented by Discraft comes to it’s epic conclusion tomorrow.