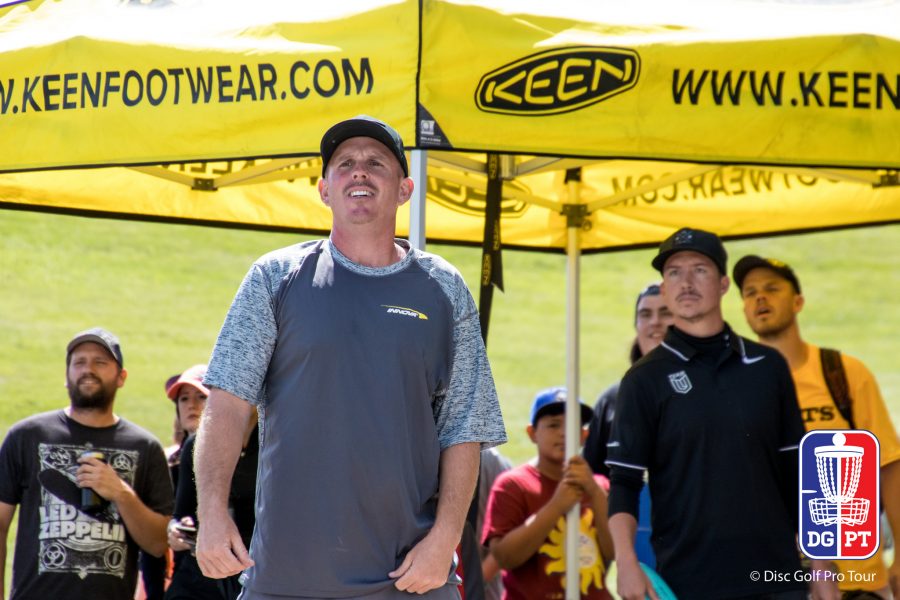 It’s no secret, Josh Anthon is back and is once again one of the top disc golfers in the game. Anthon is now one solid round away from getting his first signature
victory on the comeback trail. After going into the day with a four stroke lead, Anthon shot yet another impressive round. Saturday’s finally tally: a 9-under par, 54. Anthon’s third round brought his tournament total to 26-under par and he now leads over his next closet competitors, Paul McBeth (-6, -17) and Paul Ulibarri (-5, -17), by nine strokes. Ricky Wysocki (-3, -16), who started out the day in second, will round out the final day lead card in fourth place.
Anthon’s ability to stay between the lines has been a key to his success all weekend. While most of his competitors were taking shots from drop zones, Josh was able to land safely throughout the day, only going out of bounds one time. That one penalty stroke, which lead to a bogey on hole two, was the only blemish on his scorecard. His other lead card competitors were not nearly as consistent with McBeth taking six out of bounds stokes and Paul Ulibarri and Ricky Wysocki each taking three penalty strokes of their own.
McBeth’s spectacular putting, hitting 100% of his circle one and two putts, allowed him to make a run at Anthon. Birding six consecutive holes to start the back nine, McBeth pulled back within six strokes of Anthon and looked as if he might be the man Josh would have to beat. McBeth then limped to the finish line, shooting the last three holes at 1-over par and losing three strokes to Josh to put a damper on his final day, comeback chances.
Although his competitors were ofter trying to make the risky drive to catch him, nothing Josh did on Saturday was flashy. Instead, his “smart-aggressive” play and his excellent short game allowed Anthon to pull away and shoot yet another solid round. The only person who can say they shot better than Anthon was Cameron Colglazier. Shooting the hot round of the day at 10-under par, 53, Colglazier jumped eight spots to put him at 13-under for the event and in a tie for fifth place.
With inclement weather in the forecast for Sunday, Josh’s lead may not be safe quite yet. Rain looks to disrupt the competitors and bring in an extra element to Sunday’s finale. With Pro Tour points and a huge payout on the line, there is no doubt that those behind Anthon will still be gunning for a victory. Tune in tomorrow at 2pm when all of the action from the Ledgestone Insurance Open presented by Discraft will unfold live on the Disc Golf Pro Tour YouTube channel and UDisc Live.