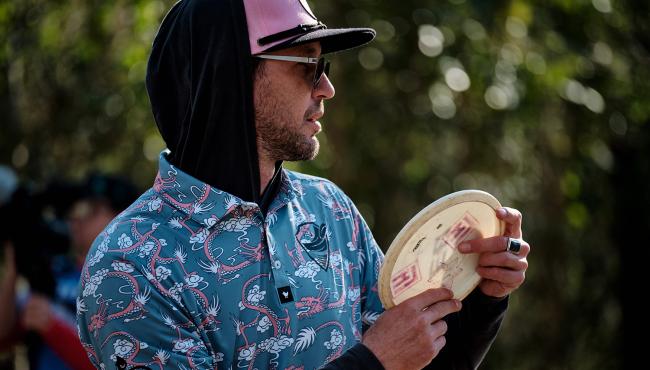 By Charles McCrackenMarch 14, 2022No Comments

Luke Humphries turned in another solid round in Waco and is one shot out of the lead heading into Sunday. Photo: Kevin Huver / DGPT

Paul McBeth is feeling confident. Luke Humphries never let the moment get to him. Chris Dickerson and Cale Leiviska made moves.

Eveliina Salonen remained at the top of the leaderboard in defense of her 2020 title, but the margin was cut in half and several players are within striking distance to chase down the title.

It’s all set up for another dramatic and exciting finish on the Brazos River at the Disc Golf Pro Tour – Waco Annual Charity Open.

A three-way tie entering Saturday’s second round, McBeth’s confidence showed on the green and again when the Beast in Waco showed its teeth, as it often does, as he battled for a one-shot lead heading into championship Sunday.

“I felt a little more confident early today,” McBeth said after starting 5-for-5 with birdies. “I got a little shaky in the woods, but once we got into the open, I felt confident.

“It felt good out there.”

A confident five-time PDGA World Champion would rattle most, but not Humphries, who matched McBeth step-for-step in pristine conditions on Saturday. Humphries is one shot back at 16-under entering the final 18 holes of regulation.

“I started off a little slow and Paul started with the hot pace,” Humphries said. “After he starts like that – 5-for-5 – you knew it was a day where you had to get your birdies.

“I’m just reacting to the shots that are placed in front of me. I don’t want to have a plan; I want to just go out there and golf tomorrow – enjoy the day.”

McBeth birdied the first two holes in the woods at Brazos East Park, but cooled momentarily, allowing Humphries to cut into the slim deficit. McBeth scrambled for a par on nine and a two-stroke swing on 11, Humphries’ birdie to McBeth’s bogey, tied things up again.

The two matched the rest of the way until 17 and 18, site of some historic and dramatic finishes in Waco. Humphries’ lone bogey came on 17 while McBeth, again, pulled out a stellar scramble to grab the birdie. On 18, McBeth’s lead dropped to one after his drive fell out of the sky into the pond.

A few cards earlier, Dickerson capped a bogey-free, 11-under round to jump seven spots into solo third. Dickerson kept it clean for the most part and when trouble presented itself, he answered with a 100% scramble mark. He’s two shots back of McBeth.

Rounding out the lead card is Leiviska, who had throw-ins of 70 and 80 feet to go with a hit on his lone circle 2 putt on his way to a 9-under round. Matt Bell jumped 14 spots as well into a tie for fourth at 11-under to join Bradley Williams, Isaac Robinson, and Joel Freeman.

Earlier in the day, Eveliina Salonen, who entered the second round with a four-stroke lead, turned in a rollercoaster finish, bouncing back from bogies with birdies down the stretch to take a two-stroke lead into the finale.

Ohn Scoggins and Valerie Mandujano are tied for second at 2-under and three players – Kristin Tattar, Macie Velediaz and Paige Pierce – are within three of the lead at 1-under par.

Salonen kept her strong play off the tee rolling on Saturday with a 75% mark in fairway hits, according to UDisc. She responded with two birdies after a double bogey on the back nine, bounced back with another birdie after a second double bogey on 15 and 16, respectively, and did the same on 17 and 18 for her two-stroke cushion.

Scoggins kept pace on the putting green, connecting on several putts from circle’s edge to go with an 85% rate in fairway hits.

Mandujano and Tattar matched the hot round of 3-under with Velediaz, Holly Finley and Maria Oliva.

It’s time for the finale in Waco, which only means one thing: anything can happen.