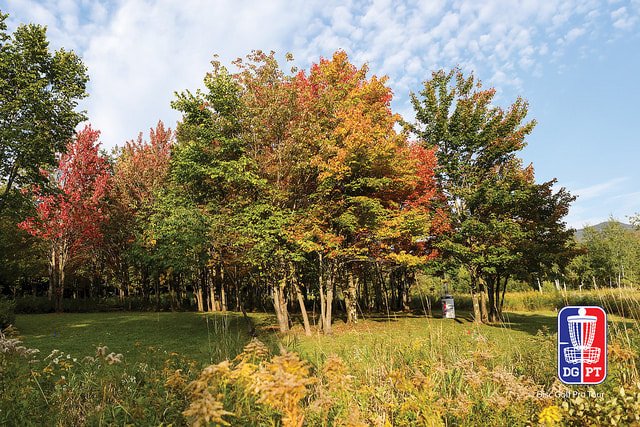 Ace, Birdies, and Bogeys from Round Two of the GMC

The second round of the Green Mountain Championship presented by Discraft proved to be quite the sequel to round one. Whether it was an ace, a bogey-free performances
or perhaps birding the entire back nine, these guys and gals put on a show. We take a look at the highlights and the lowlights of round two.
Ace
Grady Shue’s second round didn’t start out how he envisioned. After starting the day in sixth place, Shue bogeyed hole number one and pared the short hole number two. Grady needed to gain momentum and turn his fortune around. He was quickly able to do so when he hit paydirt, smashing the chains from 305 feet, on hole three to record the ace. Shue went on to shoot an 8-under par, 54 which moved him to 18-under for the event and up one spot into a tie for fifth place.
Birdies
Kevin Jones started the day in 62nd place. After a lackadaisical front nine that put him at 1-over for the round, it didn’t seem as if he was going to be able to improve much on that position and might be in danger of missing Friday’s cut. Then, a switch flipped for Kevin.
“Hole 10 is a birdie hole and once I parked it, I knew I was back to even with eight more holes in front of me,” Jones said. “I then got into a rhythm and was putting everything inside circle one.”
Jones connected on all of those circle one putts and finished the round birding each of the last nine holes. His back nine performance allowed him to finish 8-under to jump up 40 spots and into 28th place with a tournament total of 9-under par.
Birdies were difficult to come by at Brewster Ridge today with the women fighting tooth and nail to try and find scoring holes. Hole 12 was one of several holes on the course that was not handing out many birdies and Sarah Hokom was a golfer who had not yet scored a birdie when she stepped up to the teepad of the hole. After putting her drive at the edge of circle one, Hokom was able to convert on her putt to finally card her first birdie of the round. Hokom then went on to birdie the next hole and then par out to stay in first place and one stroke ahead of Paige Pierce at 3-under par.
Bogeys
Paige Pierce would have been in front of Sarah Hokom if it has not been for hole 11 which was Pierce’s Achilles heel. Even though she missed the fairway with her drive, it wasn’t the poor drive that ultimately did her in, but the putting. Pierce had a rare three-putt to card the triple-bogey seven. Unfortunately, this wasn’t Pierce’s only putting woes on the day as she hit just 74% of her circle one putts en route to a 4-over par, 64 to put her at 2-under for the event.
Nate Doss is your current leader at 24-under par and he shot an 11-under, 51 today, so why do we find him in the bogey section? Because he was the anti-bogey on Thursday. Doss had zero, zilch, nada bogeys in round two which is a big reason that he has the lead. Doss has yet to have a hiccup in the whole tournament, going bogey-free through the event’s first two rounds. If Doss can continue to go blemish-free, he could pick up his first signature win on the Disc Golf Pro Tour.
When Paul McBeth, who is number one in our power rankings, makes a quadruple-bogey, you know there is something wrong. It was clear that McBeast wasn’t quite himself on Thursday and now we know the reason for it. McBeth had to pull out of the event due to a back injury and will not compete again the rest of the weekend. Get better McBeast, we hope to see you back at it in Jacksonville for the Tour Championship.
With performances like this, you would be crazy to not tune in to round three to see what happens next. UDisc Live will have all of the scores and statistics and live coverage of the lead card with Nate Doss, Ricky Wysocki, Cale Leiviska, and Michael Johansen will begin at 2:30 P.M. ET on the Disc Golf Pro Tour YouTube Channel . Tune in to see tomorrow’s big moments live.