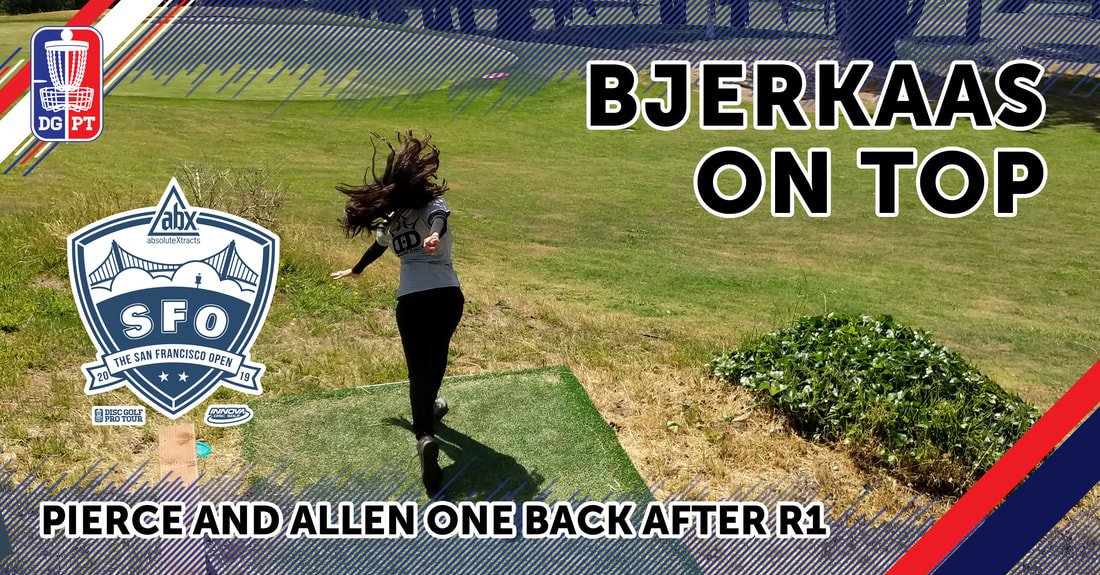 SFO FPO ROUND 1 RECAP – WHAT MORE DO YOU WANT? – AbsoluteXtracts presents the San Francisco Open driven by Innova

We are just one round into the 2019 San Francisco Open presented by AbsoluteXtracts and driven by Innova and we really couldn’t ask for a better start. I mean really what more do you want? Of the four players on today’s feature card,­­ two of them (none other than Paige Pierce and Catrina Allen) will get another day in the limelight on tomorrow’s lead card. But neither of these top-rated players are the current leader. Those honors belong to another Paige, 2018 World Champ Paige Bjerkaas of course! Bjerkaas finished the round 4 under par, one ahead of Pierce and Allen who are tied at 3 under par. Joining them on tomorrow’s lead card will be Madison Walker only three off the lead at 4 under par. Considering the fact that every player on tomorrow’s lead card except one, carded at least 3 bogeys or worse today, I’d say there’s plenty of holes left for us to see the lead change hands quite a few times. Though I imagine Bjerkaas, the only player in the event to card only one bogey on the day intends to keep that all but completely clean play coming.  It doesn’t get much better than a lead card separated by only 3 after one day. Let’s get into it!

​You don’t have to know too much about UDisc color codes to know that Paige Bjerkaas had a pretty unique experience on the course. Hole 1? Birdie 3 from 49′. Hole 3? Professional valet caliber parking for a 347′ birdie 2. Hole 5? Wrap up a 1033′ par 5 with a 27′ tester for the birdie 4. It was only the Paige’s that started that hot (Pierce hit 2,3, and 5 though). Contrary to what science might tell us, fire out West apparently can be extinguished by wind (I mean this completely figuratively! Please follow fire safety guidelines!). As the wind picked up through the center cut of the course Bjerkaas’ pace slowed to only embers for ten pars in a row before two birdies and her first bogey. I mean what a bummer to play 17 fantastic holes only to bogey the last one with an OB penalty! Life’s hard, Paige, but I bet the reigning World Champ is still feeling a-okay about her spot at the top of the leaderboard with 36 more holes to play and making 86% of her Circle 1 Putts in today’s wind.

Turning one Paige to the next, if only so I can use that transition, Pierce skipped the smooth par train that Bjerkaas opted for instead choosing to ride a roller coaster. I guess that makes sense with all the hills though, right? Anyways, after a similarly hot start to Bjerkaas, Pierce stepped on to the tee pad of the courses longest hole – hole 5 as previously mentioned is a monster of 1033′. Bang. Bang. Two full flex crushes and Pierce was long of the basket putting from circle 2 into a headwind. Remember though, if you’re gonna run a putt at least get it above the cage. Above the cage was Paige, but just a bit too much. No worries. She cashed the birdie putt quickly and moved on to hole 6. Ouch! Double bogey! Well, that’s fine, how about a birdie on 7? Okay back on track. Ah! A bogey on 9…all cleaned up with a birdie on 10. After a few more pars and a trickle of birdies, Paige finished with more birdies than other player and she canned 4 of 11 Circle 2 Putts today.  Dang. Now to clean up those bogeys tomorrow.

Catrina Allen saves par on hole 18 after her drive went OB.
If you’re playing doubles and your putt is on today, you want Catrina Allen as your partner. No one in the field generated more birdie opportunities than Catrina. Leading the pack in Parked and Circle 1 In Regulation, the only player to best her in Circle 2 In Regulation was our leader, Paige Bjerkaas. Catrina’s roller coaster was a good deal less turbulent than Pierce’s. A couple of birdies and pars, then bogey; another couple birdies and a par; two bogeys sprinkled on a par; finish with some birdies; turn in the card and start looking forward to tomorrow. Catrina Allen has been playing great lately so it’s no surprise to see her right behind the lead. She is more than capable of turning her chase into a lead within the first couple holes tomorrow…if the putt can stay online. 70% today is 7% better than her season average of 63%. That’s saving her about 1 throw per round on average. All she needs to catch Bjerkaas.

Madison Walker didn’t take a single OB penalty the entire round. Making her one of only two players to never go out of bounds today – the other being Hannah McBeth who finished 2 over par, tied for 7th.  There are certainly courses with harder to avoid OB lines than these but when literally 91% of the field goes OB at least once it’s safe to say it’s a part of the challenge Gleneagles provides. Despite those difficult over the hills and across valley shots, Madison played things smooth in the fairway but found some struggles on the green. A three-putt for double bogey on 8 was the first deep cut, and then the three-putt birdogey on 13 was just salt in the wound. It wouldn’t hurt for Madison to land some Circle 2 Putts either. But despite those troubles, she’s putting right on track with her season average of 60% in Circle 1X. Hopefully, some practice on the putting green tonight can get her ready to chase down the rest of our lead card.

Of course, there was a tremendous amount of great play today from folks besides the four we got into here, I encourage you to familiarize yourself with live scoring on UDisc if you haven’t yet because there are just so many stories in those numbers. For right now we’re still on eagle or ace watch, but today’s longest throw in award goes to Erika Stinchcomb, currently in 9th, for her 81’ birdie make on hole 4. Nice shot! On the topic of nice shots, let’s hear it for Kona Star Panis who was 95% on fairway hits today, she’s in 5th place now. And lastly, a round of applause for Zoe Andyke making 88% of her Circle 1 Putt’s today she’s showing that her West Coast roots are paying off, she’s currently tied for tenth. Don’t miss any of the action as the 2019 San Francisco Open presented by AbsoluteXtracts and driven by Innova heads into moving day.

This article was written by Staff Editor & Writer Zach Podhorzer.