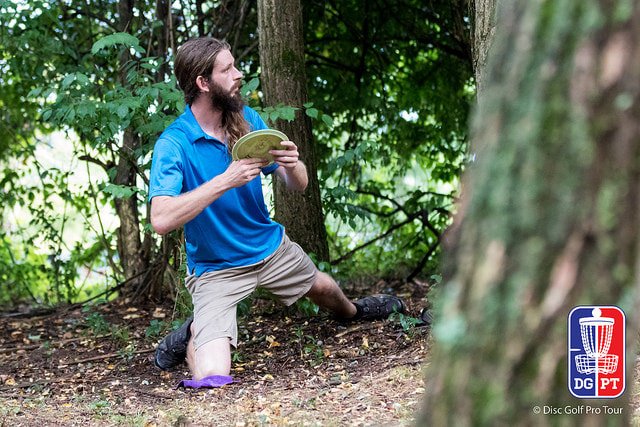 A Standoff at Idlewild: MPO Round 2

The second round of the Idlewild Open driven by Innova Discs and The Nati welcomed much better weather but the scores didn’t drop as some expected. The Idlewild
course was nothing if not difficult for the pros to navigate today. The tight, wooded holes kept the players honest throughout the day and forced them to play it safe more often than not. The feature card had a refreshing change from the usual suspects that tend to lead this far into a tournament. With fresh faces come new opportunities for drama, and players like Nate Perkins are giving the fans a new hero to root for in this big DGPT event.

Nate Perkins started out his day with a share of first place on the lead card of the Idlewild Open and he took nothing for granted as he carved up the Idlewild course. As unforgiving as the Kentucky course can be, Nate seemed to have all the answers for the all the wooded holes that drove the numbers up for everyone around him. Right out of the gate, Nate counted four birdies in four straight holes. Getting some low scores before you encounter the more difficult holes seems to be the way to go if you are able, and Nate was more than able. He possessed the calm demeanor of a pro that has been there before and knows how to handle the pressure. Are we witnessing the rise of a disc golf star? Nate had a shaky finish but ended the day eight under par and the share of the lead.
Nate Perkins Round Two Stats

James “Smooth” Conrad came out roaring during the second round! He shot a five under par through the first four holes. And if not for an unfortunate double-bogey on hole 8, his first nine holes would be played as clean as you could hope to at this always threatening course. His start to the second round is reminiscent of his tremendous second round at the Waco Charity Open where he narrowly lost in a playoff to Jeremy “Big Jerm” Koling. James’ style of crushing a putter straight and long through the woods surely gives him an edge over other competitors who choose faster discs at their own peril.
James Conrad Round Two Stats

Drew Gibson looked primed to make a move on the second day of the Idlewild Open. The only thing he lacked today was a steady rhythm. He flirted with finding a groove several times but the course hit back.  At one moment today he made a tricky putt that curled around a tree, inspiring him to and raise his arms in triumph. That was the kind of day that Drew had today, grinding out each par and working himself out of tricky spots.  He also hit a huge par-saving 100 foot putt on hole 13. The tenacity that he showed today by keeping himself on top of the board and in the hunt is how championships are won. He finished in a tie for third place with Paul McBeth and James Cole with a five under par.
Michael Johansen , favoring a similar style as James Conrad, preferred finessing his plastic to keep the discs in the fairway. His style paid off as MJ took what course gave him, playing for par when he had to, and sinking birdies when he could. He has a reputation of shredding the wooded courses and he lived up to the hype as he did work on the back nine while other didn’t fare too well. James ended with a three under par in seventh place tied with Paul Ulibarri, and Reid Frescura.
Honorable mentions include Paul McBeth shooting a six under par with a very clean scorecard. Four birdies and one eagle kept him in contention for the final day and making the lead card for the final day. Gregg Barsby finished in sixth place with a four under for the tournament.
James “Snappy” Cole threw an incredible round carding the hot round of the day with a seven under par, moving up 17  places, and finishing five under for the tournament in a tie with Paul McBeth for third.
With the monumental challenge that the Idlewild course shows on the back nine, it took great concentration in order to keep the scores from rising right before the competitors could get off the field. Nate Perkins played a masterful second round carding six birdies with three bogeys to dirty his scorecard. In the end, Nate Perkins and James Conrad will have one more day to decide who takes the title. The lead card for the final day will be James Conrad (-8 ), Nate Perkins (-8), James Cole (-5), and Paul McBeth (-5). The competition is getting hotter than ever. Stay tuned tomorrow for the final day of the Idlewild Open driven by Innova Discs and The Nati and watch live coverage at 2:30 pm eastern to see who will take the title. You don’t want to miss a minute of the action.