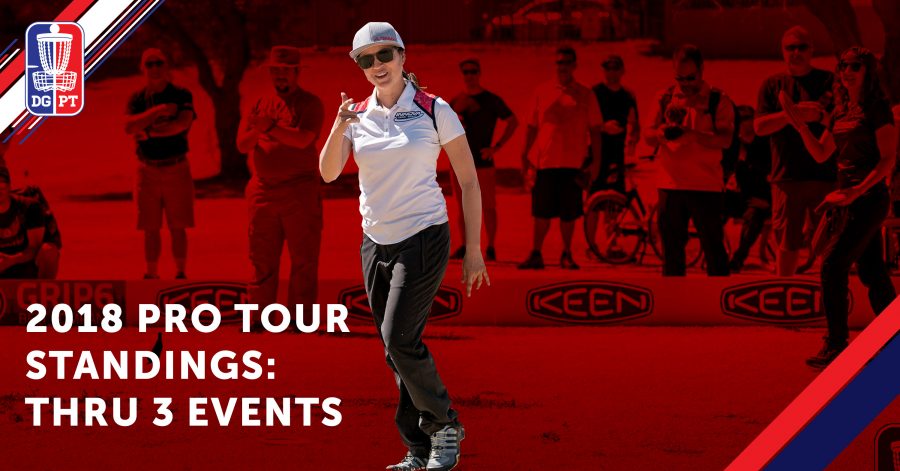 The first three events of the 2018 Disc Golf Pro Tour is in the books. With The Memorial, W.A.C.O., and JBO behind us we can now review the current Pro Tour Standings and discuss what to
look for moving into the next three events on tour. As a quick refresher, the top fifty players in both the MPO and FPO divisions receive points a scale where the first place winner receives 100 points and 50th place receives 2 points. Every player after 50th place receives one point. The best seven of nine events are counted. The complete points structure may be viewed here .
The 2018 Disc Golf Pro Tour Championship will feature the top 12 in FPO standings. Those who finish 5th thru 12th will compete in the quarterfinals where the top four scores from the quarterfinals round will advance to the semifinals to play along with the top four in tour standings. While one player currently sits atop the standings – due to a highly competitive field in many ways the FPO standings are more exciting to watch across the season than the MPO standings.
After three events Paige Pierce sits atop the FPO standings with a perfect 300 score. She has finished in first at the first three events and does not look to letup any time soon. A quick look at Udisc however tells us that Paige currently is not registered for Utah, DGLO, Idlewild, or Ledgestone. While players drop two of their nine events, should Paige opt to not play all four it could result in a sub 700 standings finish that could result in her not taking first in the standings. While this does not seem likely given her current pace, this is a possibility.
As for the rest of the standings, it is still any woman’s game. After the Jonesboro Open Sarah Hokom was able to move into second place in the standings, passing up Lisa Fajkus who had owned the second place spot previously. Currently only ten points separate the two and given how both of them often finish in the top five we could see them battling for the second place spot all season.
Sitting only two points apart from each other in standings are Jessica Weese and Catrina Allen . Jessica Weese currently holds the lead, which places her in the top four in 2018 Tour Points standings. While Catrina has not made it onto the podium yet this season, she has consistently finished within the top six at each stop so far. It is clear both Catrina and Jessica are set on reaching the championship and it will be a battle to see if either or both of them can claim a bye to the semi-finals.
Other players who are currently in the running to be qualified for the 2018 Pro Tour Championship presented by Prodigy Disc include Rebecca Cox , Ellen Widboom , Jennifer Allen , Madison Walker , Kona Star Panis , Pixie Cannon , and Kristina Gold . Each has a shot at finishing in the top 12. Below we delve a bit deeper into a few of their stories.

There are quite a few notable FPO players who are on the outside looking in at this point. Valarie Jenkins , Paige Bjerkaas , and Holly Finley are all registered for multiple events in the second half of the tour and could put together top finishes to land them in the hunt for a Championship berth.
It is clear there is a close race in the FPO standings for the 2018 Disc Golf Pro Tour. You will not want to miss out on the action when we pick back up May 25-27th at the San Francisco Open. Live coverage will start each day at 5pm ET. Make plans to watch