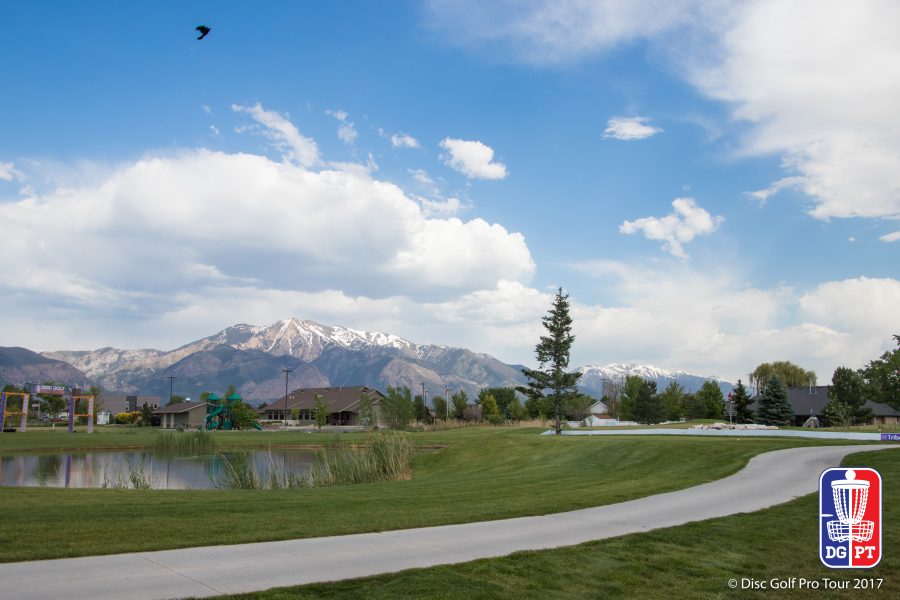 A Deadlock in Utah: MPO Round 1

This year’s Utah Open presented by Latitude 64 is shaping up to become one of the most exciting in recent memory. Perhaps it was the lush green that ​
they encountered at Mulligan’s golf course or maybe it’s the illusion that the discs would land like they normally do on a traditional disc golf course. Either way, the professional men played extremely aggressive at the start of round one. Of course the wind still blew the flags at times in Ogden, Utah but that didn’t deter the best disc golfers in the world from making a statement and taking aim at many targets along the way. As with years past, because of the amount of water hazards and O.B. the day was filled with player deliberation.
Josh Anthon
Up until now, Josh Anthon has never played in a DGPT event and he has made the most of it by carding three birdies out of the first five holes. He skillfully used his flex shot to gain added distance, and in the process giving himself long looks for birdies. Unfortunately, far too often his aggressive play worked against him as he caught some tough breaks and found himself out-of-bounds far too often. Josh finished the day three under par in tenth place tied with Lance Landgren. Here’s hoping he won’t let today’s bad breaks effect the rest of the tournament.
Jeremy Koling
Jeremy “Big Jerm” Koling took no time the first day to make his presence felt. Perhaps the echo of his win last year rang in his head or maybe it was the course layout that allowed a backhand/forehand player to excel. Whatever the reason, Jeremy was a man on a mission by carving up the front nine with five birdies. He played most of the day as a man with no fear, of course that got him in trouble from time to time but he used great putting to save his par as well as his round. Unfortunately, he left a lot of strokes behind as he finished the 18th hole. He finished his day with an eight under par and tied for the lead. Will his tenacity pay off in round two?
Jeremy Koling Round One Stats

Ricky Wysocki
As they tend to say, Ricky Wysocki did Ricky Wysocki things during the first round. He may have a had some bumps in the road but when you are as good a player as Ricky is, there is not much that will stop you. He transcended the numbers today with some timely putts and some accurate drives that rewarded him with easy tap ins. The couple hiccups early on his front nine were the only indications that he was a mere mortal like the rest of us. He kept his composure and ended his day with an eight under par and share of the lead.
Paul Ulibarri
Paul Ulibarri played one of the smartest rounds of the day and was rewarded with a share of the lead. Paul’s apparent strategy to play it safe kept him in contention throughout the round and put him in a great position for day two. Will he play conservative tomorrow?
Paul Ulibarri Round One Stats

Bobby Musick
Another new addition to the Disc Golf Pro Tour and highlight of the day was Bobby Musick. Well-known for his amazing results at California events, Bobby showed why there is no excuse for the player to miss any event that features the most talented players in the sport. His silky-smooth form and intelligent course management skills placed him atop the leaderboard early with a card full of only pars and birdies for the entire day. In fact, Bobby could not have played his round much better ending the day eight under par and finishing in a tie for first place.
Bobby Musick Round One Stats

Today’s round in Ogden, Utah was a thrilling display of skill and imagination. A course like Mulligan’s is designed to spread the field as well as the leaderboard, but today the players had the last laugh. Although many competitors decided to play the course aggressively while others took the safer routes, all roads seem to converge in the end as an astonishing total of four players will start round 2 with the exact same score! We ended the day with four hot rounds, and four great leaders! Tomorrow’s lead card will be Bobby Musick, Paul Ulibarri, Jeremy Koling, and Ricky Wysocki. With a first day like this one, tell your friends and tune in to see what strategy will give our competitors a chance to pull away from the pack. Join us tomorrow at 4 pm eastern time to watch round 2 of the Utah Open presented by Latitude 64 .