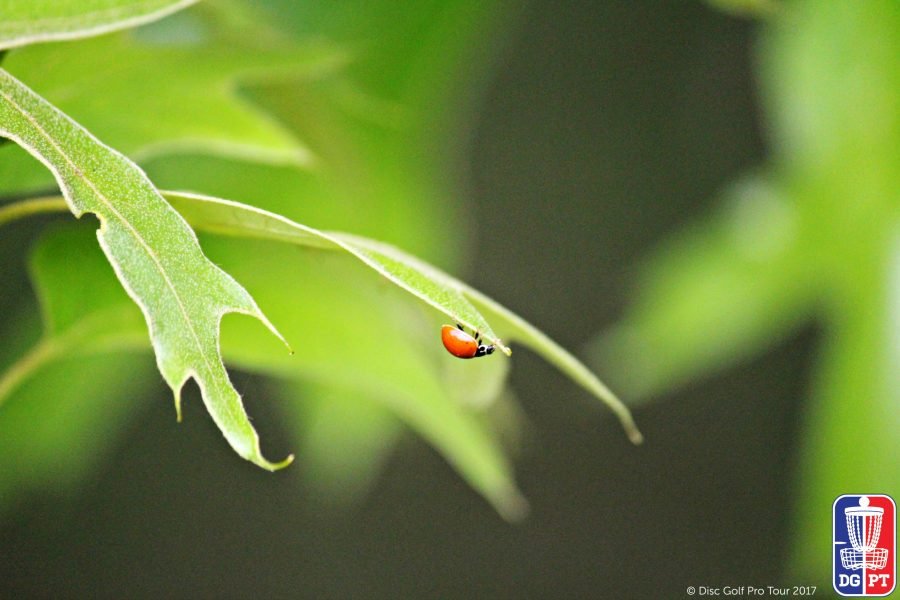 A Battle at Jonesboro: FPO Round 3

If you were looking for the best female disc golf competitors in the world, look no further than The Spartan Mowers / R&R Farm Equipment Jonesboro Open presented ​
by Prodiscus. The third day began with Sarah Hokom possessing the out-right lead for the first time after a round in this event and bringing some real momentum with her into moving day. Solid play throughout the previous 36 holes rewarded Jessica Weese with a second place position on the lead card with Paige Pierce sliding into the third slot. The third day of the Disc Golf Pro Tour event held so much potential with most players in the tournament holding steady on their positions throughout the day which translated into compelling action.

Sarah Hokom is a World Champion and so far this tournament she has demonstrated why she has been on top of the mountain for so long. The first two rounds she has landed on the green in regulation within circle 1 (20 out of 54) times and circle 2 (33 out of 54) times. What’s this mean? It means she has been putting for a birdie more often than she has for par, which translates to birdie conversion or easy tap-in pars. If you add in the 84% circle 1 putting rate she is deadly around the green. Through the halfway point in the tournament the stat that begs to be seen is that she’s had pars on 35 of 54 holes, a whopping 62%. As the day began for Sarah kept to her game plan and not straying far from her strengths. She held onto her lead until holes #11 and #12 when she bogeyed twice losing strokes and turning over the lead to Paige Pierce but she birdied two of the last three holes while Paige carded a rare triple bogey.  Sarah secured the lead and finished with four under par going into the final day in first place.
Sarah Hokom Round Three Scoring Breakdown

Paige Pierce by stats alone may be the best female disc golfer in the world. She has all the skills and all the confidence. Yesterday, however, Paige hit a slight roadblock. Although she is ranked first among the field in birdies 28%, the problem that she is encountering is converting par when she absolutely must. Between the first two rounds, Paige has accrued four bogeys and two double bogeys, all told eight over par strokes that have gone against her score. perhaps the most telling stat is that Paige is ranked ninth overall in circle 1 putting. Her 77% putting rate for the first two rounds was drastically lower than both Hokom and Weese. Going into the third round Paige needed to knock down those closer putts and she did that increasing her circle 1 putting rate to 84%. Paige out ran her bogeys with some late round birdies to take the lead away from Sarah Hokom until she carded a heartbreaking Triple bogey on hole #16 that stripped her of the lead. She does however have the hot round of the day with an even score finishing the day in second place two under par for the tourney.
Paige Pierce Three Round Scoring Breakdown

Jessica Weese has become a player to reckon with! She has earned 48 career wins and playing side by side with champions like Sarah Hokom and Paige Pierce has only seemed to bolster her confidence. You want to know how to keep up with the best female disc golfers in the world going into the moving day round? Jessica has done it with a 97% circle 1 putting rate. She found the chains an incredible
34 out of 35 holes. But wait, there’s more. Jessica scrambled 14 out of 18 holes that she found herself in a bind. A 78% scrambling rate with brilliant putting has given her a chance to make a splash today.  Unfortunately Jessica carded four bogeys and one double bogey on her day and with them missed a great opportunity to challenge for the lead. She remained in third place with a one over par for the tournament.
Jessica Weese Three Round Scoring Breakdown

Jennifer Allen in many ways has the potential to become the Cinderella story of the event. With a slow start on her first round, she really came into her own the following day and with solid play made the statement that she wasn’t going anywhere! If there is a problem in her game at the halfway point it is playing over par. She carded seven bogeys and one double bogey through 36 holes. But what is keeping her in the hunt is a remarkable 25% birdie rate second among all women. Does she have a hot putter in Jonesboro? You bet! Jennifer has drained 34 out of 35 from circle 1, first with 97%. What was the number one stat she had to improve to move to the top? Improve her 50% scrambling rate. Scrambling successfully half the time is nearly always a losing battle even with a scorching putt. Jennifer jousted with Melody Waibel early before putting together a strong back nine carding three birdies in all giving her fourth position alone ending the third round with five over par for the tournament.
Jennifer Allen Three Round Scoring Breakdown

Melody Waibel came into round three sitting in fifth place. Her scrambling rate of 38% has helped her move up the leaderboard throughout the tournament and put her in a good place for the final day. Early in the round Melody moved passed Jennifer Allen to take the fourth place but soon struggled with seven bogeys and one double bogey to end the day in fifth place.
The last day of the Spartan Mowers / R&R Farm Equipment Jonesboro Open presented by Prodiscus will see Sarah Hokom (-4), Paige Pierce (-2), and Jessica Weese (+1) on the feature card. The competition has been fierce and it will take one more round to decide a victor. Given all that we have seen so far, these women will not go down without a fight. Log onto dgpt.com to catch all the action and watch live coverage of the MPO division at 2:30 pm ET.