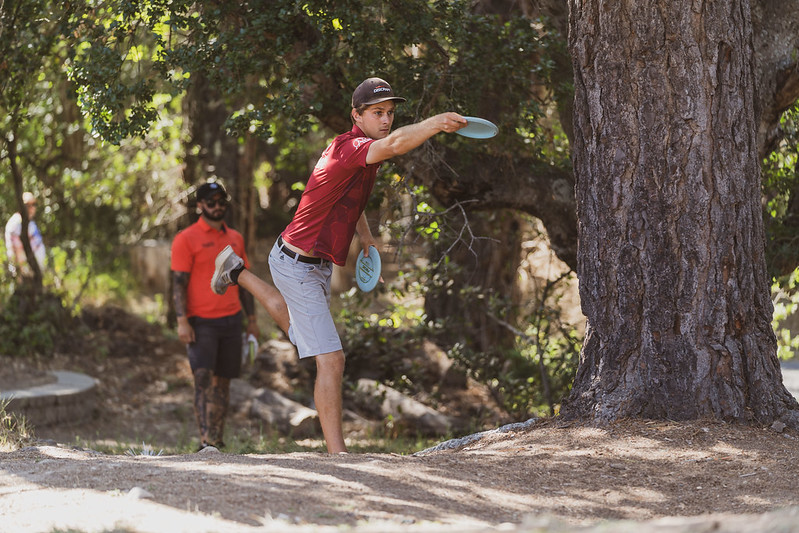 After a rainier first round at Trojan Park in Rainier, OR, the players at this year’s Resistance Discs Open presented by Discraft were able to welcome the sun back to the PNW for a better weather second round.

Good weather or bad, Adam Hammes has proved that he has what it takes to shoot the hot round at this course, shooting another -10 round. Hammes finishes round 2 in 1st place at -20 with a bogey-free round. With Scott Withers matching Hammes and finishing with a -18 in 2nd place, these two players have begun to run away with the lead. While Trojan Park does have a lot of OB and water hazards, Hammes and Withers have proved round after round that they are the only two players who have remained in complete control during the tournament.

Tim Barham played a bogey-free -7 second round to jump up a spot on the leaderboard with Cole Redalen, who was on pace to shoot the hot round of the day before a bogey and double-bogey on Holes 16 and 17. These two players managed to jump Jeremy Koling and Nate Sexton, who shot -6 and -5, almost replicating their first round results, but came up short of matching the leaders during the second round.

While players like Philo Braithwaite and Cody Kirkland scored often and shot -8, they and a majority of other players will need to shoot perfect and hope that Hammes and Withers slip up if they want a chance of overtaking either of these two players.

In the FPO, Deann Carey has cemented her lead and taken what might prove to be an insurmountable lead with a  -1 round and claiming a 13 stroke lead heading into the final round. Even with her triple bogey on Hole 11, Carey scored early and birdied 4 out of 7 holes through Holes 2 – 8. Kira Alexander and Kat Mertsch struggled to gain strokes on Carey, shooting +6 and +7.

Britney Quesenberry, who came into the round at +2, shot a +10 round without any birdies to drop down to 3rd place.

Much like in the MPO division, in the FPO, players will need to play perfectly and also hope for the leader, Deann Carey, to slip up if they hope to overtake her lead and jump to the top of the leaderboard. However, for any players hunting for DGPT points, the fight for 2nd place will be an exciting end to the tournament