By Jared DiMascioJune 6, 2021No Comments

An exciting final round at the 2021 Portland Open presented by Dynamic Discs in the MPO division included some close calls, a couple of brutal chain-outs, pressure from the chase card, and 2 players shooting a new course record. However, just as the rain started to come down late Sunday, it was Eagle McMahon who managed to snag the win in Oregon, after narrowly losing to Drew Gibson at the inaugural Portland Open in 2019. 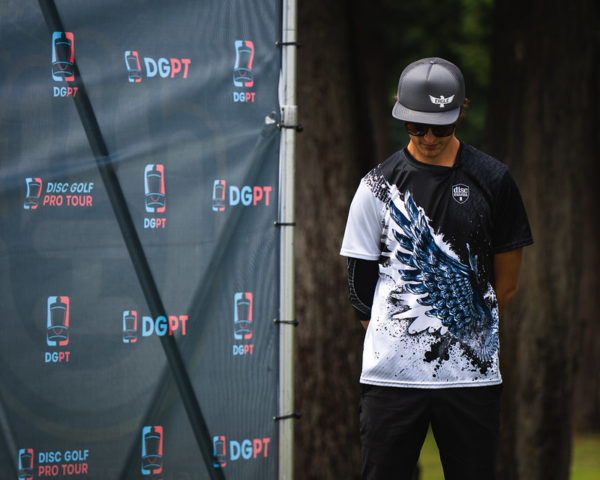 Eagle McMahon avenges his 2019 Portland Open playoff loss with a 1-stroke win after Sunday’s round. He managed to hold off the rest of the lead card, and a couple of players from the chase card.

McMahon followed up a -7 first round and -8 second round with a -6 on Sunday, but it was still good enough to take first place over Ricky Wysocki (-20) and Paul McBeth (-20) by 1 stroke. McBeth carded 7 birdies out of 10 holes in the middle stretch to make a push for the podium and even caught up to McMahon’s lead with a long putt on 18;

Unbelievable. @Paul_McBeth with a MONSTER birdie putt that put him in a temporary tie for the lead. McBeth pushed hard and challenged the leaders from the chase card today. pic.twitter.com/La83YEmzpL

However, even his -9 round fell just 1 stroke short in the end. Wysocki kept it close with McMahon through most of the round, but an early bogey on Hole 1, and a pissed birdie on Hole 18 kept him from forcing a playoff. Also charging from the chase card, Calvin Heimburg (-19) played a bogey-free round and even tied McBeth’s -9 round.

Kevin Jones, who sprang out to an early lead over McMahon, with 10 birdies through 13 holes, saw his winning hopes slip from the chains as a long putt on Hole 15 chained out and was pushed by the wind into a roll that went OB. His quadruple bogey on Hole 15 negated his lead over Eagle and he finished the day in a disappointing T-4th.

In the FPO division, even the Oregon showers couldn’t rain on Paige Pierce’s parade as she marched to a victory. Despite Catrina Allen shooting a bogey-free -8 round to Pierce’s -7, the 4 stroke lead proved too much to overcome in the end. This marks Pierce’s 4th tournament win in a row, including OTB Open, USWDGC, and the Santa Cruz Masters Cup; it is also the 3rd time Allen has taken 4th to Pierce this season. 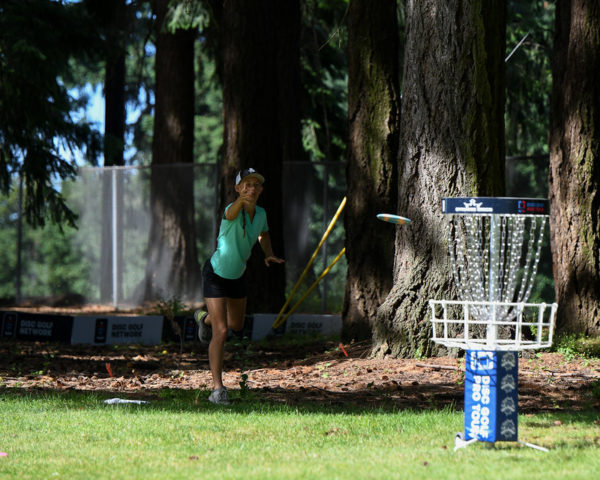 Paige Pierce claimed her 5th win of the 2021 season and her 4th in a row. She finished the tournament at -21, giving her a 3 stroke win over Catrina Allen, and an 11 stroke lead over 3rd place.

While Pierce and Allen were battling it out for the win, their separation from the rest of the division left another exciting match play for 3rd place. While players like Madison Walker, Kona Star Panis, Ohn Scoggins, and Jessica Weese all scored early and often, none of them could quite string together enough to make a final push for the podium.

However, the battle between Hailey King and Ella Hansen proved to be quite exciting and came right down to the last hole. Both came into the last round at -6 and despite exchanging their scores 11 times, both ended up tied for 3rd as Hansen scored a birdie on 18 after an impressively long roller, and King couldn’t quite hit the long put and managed a par; a fitting response after Hansen and King’s battle for 2nd place at the USWDGC last month. Despite 63% C1x putting from Hansen in the final round, she managed to come up big when it mattered, on Hole 18 and Hole 15.

Ella Hansen NAILS the pressure par save after a tough roll-away on the now INFAMOUS Hole 15 at Glendoveer. 🔥 pic.twitter.com/bPWH4b3kcx

Next weekend, the Disc Golf Pro Tour heads to Rainier, Oregon for the Resistance Discs Open presented by Discraft, a Silver Series event on June 11th-13th. The PDGA B-Tier event was added to the Oregon PDGA schedule following the cancellation of the Beaver State Fling, which was supposed to be a PDGA National Tour event, due to course damage sustained over the winter combined with concerns regarding the COVID-19 pandemic.