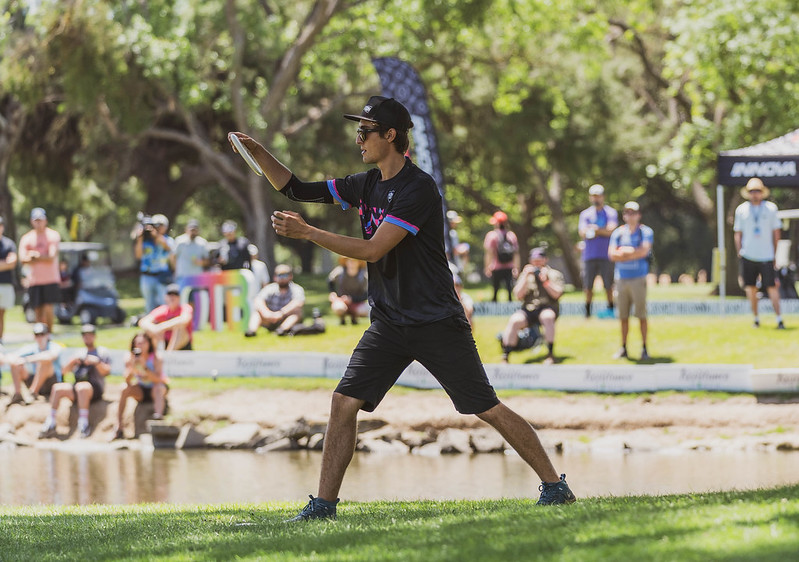 A much windier day made for some exciting golf today at Glendoveer Golf Park for the 2nd round of the 2021 Portland Open presented by Dynamic Discs. With wide open and long fairways, the wind and trees proved a little more visible during Saturday’s round than the one previous.

Kevin Jones joined Eagle McMahon in shooting the hot round (-8) to jump onto the lead card for Sunday’s final round, ending Saturday’s round tied for 2nd with Simon Lizotte and Ricky Wysocki.

Despite just barely missing putts for eagle on the 1198-ft Hole 18 in back-to-back rounds, Eagle McMahon shot -8 to hold onto the lead by 2 strokes over the rest of the field. Simon Lizotte (-7) and Ricky Wysocki (-5) managed solid rounds with some great golf and both are within striking distance for Sunday’s final round. While Paul McBeth struggled and fell behind by a couple strokes, Kevin Jones was there to pick up any slack and jump into a 3-way tie with Lizotte and Wysocki after replicating McMahon’s -8 round. Jones’ bogey-free round and stretch of 5 birdies over 6 holes helped cement his lead early on, and he managed to hold on through to the end of the day. With only a few bogeys among the top players, Thomas Gilbert, Paul McBeth, Calvin Heimburg and others will have to score early and often if they hope to jump to the top of the leaderboard on Sunday. Despite starting the day off with 3 straight birdies, Nikko Locastro just couldn’t keep the pressure coming and eventually took 3 bogeys over 4 holes to negate the great start. With puts like this below, it’ll be hard for any of the lead card to feel safe with McBeth only 2 strokes behind.

#McBEAST is making a push with putts like this. 🥏

It's still very tight at the top of MPO. Tune into #DiscGolfNetwork to see what happens next: https://t.co/6EPEFkQwEw pic.twitter.com/jy2cFnRb1z

Paige Pierce follows up her -9 first round with a -5 second round to maintain the lead over Catrina Allen by 4 strokes.

It looks like the answer to the question might be that no one can beat Paige Pierce; especially when she plays as dominantly as she did in round 2 at the Portland Open. With 5 birdies in the last 6 holes, Pierce was able to make up for some bogeys in the middle of her round. Allen, Jessica Weese, and Hailey King couldn’t quite string together enough birdies or pars to stay on pace, and it may prove to be too much to overcome if they hope to win the tournament. Kona Star Panis and Sai Ananda both looked like they were making a charge early in their rounds, but ultimately fell short as Panis followed 4 early birdies with 4 midround bogeys, and Ananda hit a rough patch of 2 bogeys and a double-bogey before adding back another 2 birdies on Hole 16 and 17.

The story of the day belongs to Ella Hansen, who played a clean round through most of the day, carding 6 birdies and only 1 bogey to match Pierce’s -5 round. Hansen will join the lead card for Sunday, knocking King to the chase card with Panis, Ananda, and Deann Carey.

Live coverage of the 3rd and final round starts tomorrow at 5pm ET | 2pm PT on Disc Golf Network. You can also follow along with live scores on UDiscLive.