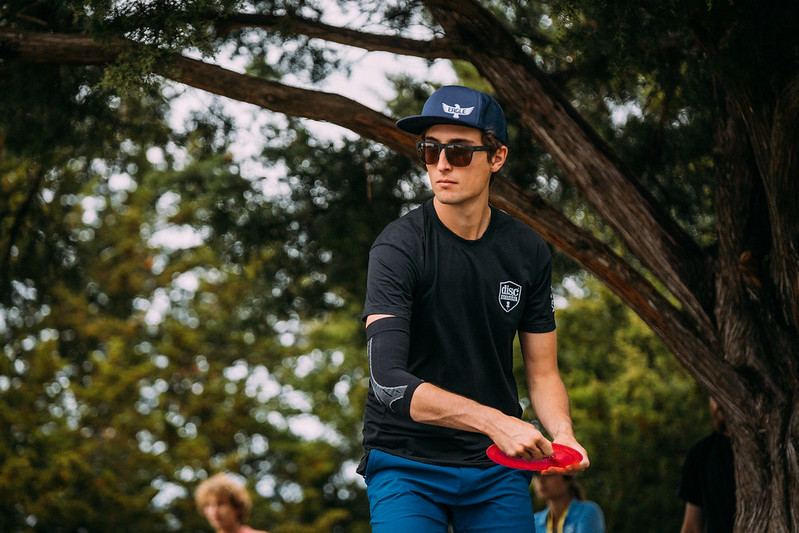 By Connor HanrahanMay 14, 2021No Comments

The opening day of the OTB Open in Stockton, CA is in the books and the competitors saw nothing but conditions as beautiful as the course itself. Wind added technicality and a bit of heat relief to the already challenging Swenson Park disc golf course.

Swenson Park holds the largest course par and total footage for an Elite Series event so far this year, so it is only natural that Eagle McMahon is the leader after day one. The key to his game was consistency and precision. Eagle putted 100% inside C1X, made 83% of C2’s in regulation, and didn’t give himself a single chance to scramble. His bogey-free, unprecedented -13 has set a standard for rounds to come. Adam Hammes and Joel Freeman are the only other players in the top ten to shoot bogey-free golf.

Joining Eagle on the lead card tomorrow will be Ricky Wysocki, Nate Sexton, and Paul McBeth; all of whom carded one bogey. While the others took theirs late in the round, Ricky took his on the first hole before birdieing twelve of his next seventeen holes, finishing -11. McBeth and Sexton finished -10 and -9, respectively, shooting the steady golf we have come to expect of them.

Notably, this is Simon Lizotte’s first event of 2021. The German superstar finished 2020 with his worst professional performance to date, finishing 69th at USDGC before taking time off with an injury. He declared before the OTB Open that he would be treating the tournament as rehab in an effort to prevent any exacerbation of the injury. The entire disc golf world is excited to see Simon back competing and creating new lines.

On the topic of distance, Aaron Gossage finished the day at -8, tying him for 5th place with James Conrad, Anthony Barela, and Adam Hammes. While the latter names are familiar with the tour, Gossage is set to make an impact on the tour scene. Hailing from Grand Junction, CO, he has yet to make his mark on the 2021 season, though he finished in a respectable 15th at Jonesboro.

The FPO division, as always, promises a proper battle between Catrina Allen and Paige Pierce. Paige played incredibly solid golf all day, netting six birdies before her first bogey on hole 16, the third most difficult hole for the women’s field, and another on 17, the most difficult hole. Joining her on the lead card will be Jessica Weese, the leader after day one; Lisa Fajkus, the 2021 Challenge at Goat Hill FPO Champion; and Catrina Allen.

Weese finished the day at -5 with one bogey, a very solid round deserving of first place. She is a predominantly sidearm player, though she has developed a top class backhand as well. Her variety of shots is certain to paint the course in a color which we have not yet viewed it in.

Congratulations to Austin Hannum for carding the only eagle of the day on hole 3.