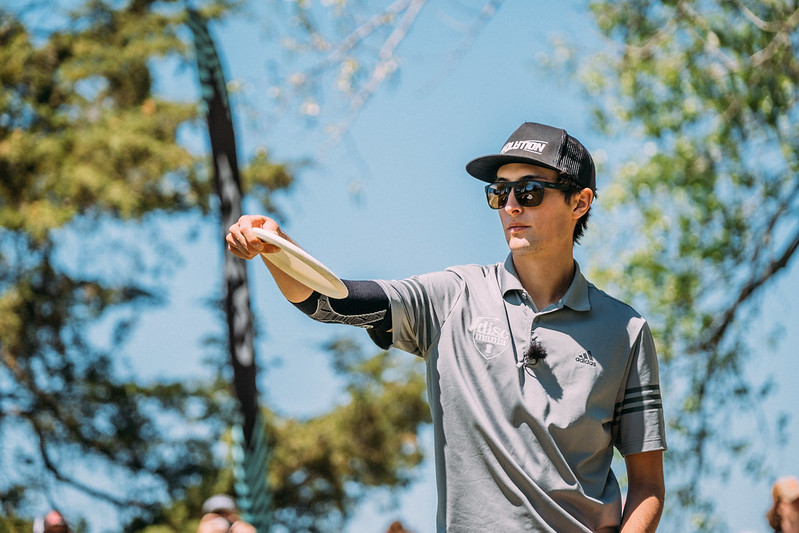 By Connor HanrahanMay 16, 2021No Comments

The weekend has concluded and along with it the 2021 OTB Open. After a long perilous battle at the top of the leaderboard, Eagle McMahon found himself champion. After finishing 53 and 56 the first two days he sealed the win handily with a 57, though his margin of victory did not appear so large until the end of the round.

A couple cards ahead of the lead, Calvin Heimburg quickly put himself in position to challenge for the title, shooting -11 through the first thirteen holes. Calvin was only one stroke behind Eagle after hole twelve, but bogeyed holes fourteen and sixteen to settle him in a respectable T-4 position with Ricky Wysocki. Anthony Barela shot a bogey-free -10 for the day, tying him with James Conrad who shot -11 after capitalizing on a C2 birdie opportunity on the eighteenth hole. The two finish T-2 at -28 for the tournament.

Elsewhere in the field, Adam Hammes shot a bogey-free -11 to place him T-9 with Nikko Locastro who shot a disappointing -6 final round. Joining Hammes, Heimburg, and Conrad at -11 for the day was Ezra Aderhold. Aderhold shot a flaming hot -6 on the front nine and eagled hole 14 with a beautiful throw in from several hundred feet.

To nobody’s surprise, the lead card battle in the FPO field was nothing short of glorious. Paige Pierce narrowly defeated Catrina Allen for the weekend, beating her by just one stroke. Catrina made mistakes during the first two rounds that would ultimately lose her the tournament despite a course record -10 for the day with two bogeys; an unreal feat almost matched by Paige at -9 on the day. Unfortunately for Catrina, the lead was never quite within feasible reach until the final hole when it was already too late.

Jessica Weese and Lisa Fajkus bore witness to the title madness and both shot solid rounds, finishing at -2 and E on the day, respectively. Elsewhere in the field, Ohn Scoggins and Missy Gannon shot -5, rocketing Ohn from 12th to 8th and Missy into 4th place. Missy put on a putting clinic, converting sixteen of eighteen possible C1X opportunities while Ohn capitalized on three out of five chances inside C2. Ohn’s putting prowess is typically the trademark of her game, though today she putted 0% inside C1X because all of her putts near the basket were inside the bullseye.

This weekend has marked the return of two prominent figures within the disc golf community: Simon Lizotte and Juliana Korver. As the weekend progressed, Simon seemed to get his feet back under him, shooting 62, 61, and 58 on a course that would typically play to the strengths of his game. Juliana’s tournament cannot be summarized with the same undertone as she shot 71, 66, and 70. Despite the fluctuation in scores, she finished the tournament with only five holes-over-par, a consistent display that illustrates her control over her game and adept tournament expertise. Julian finished the tournament in 6th place at -3.