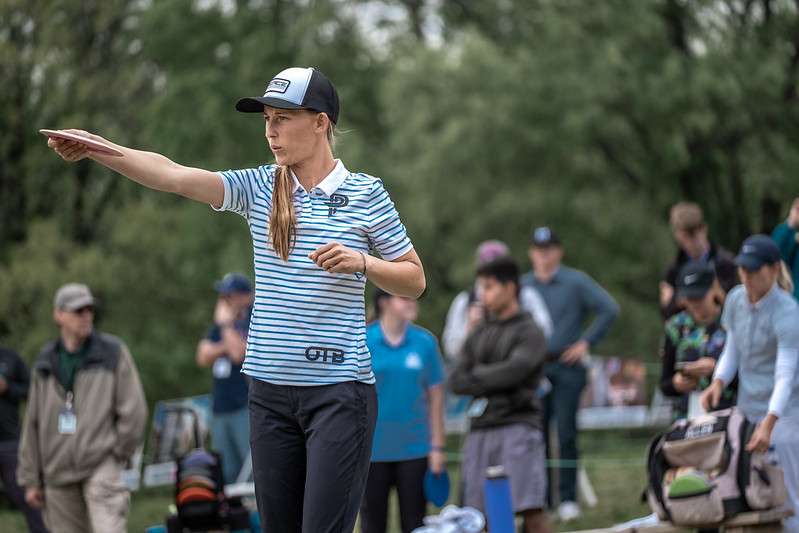 By Connor HanrahanMay 15, 2021No Comments

Day two of the 2021 OTB Open has shown fairer playing conditions than the first day and has yielded scores that prove it. Lead card shot the consistent rounds we might expect from them with the exception of Nate Sexton who only managed a -3 on the day, leaving him tied for 10th place. McBeth and Wysocki both shot -8 on the day, keeping them in the title race, but Eagle McMahon’s -10 on the day has opened his lead to four strokes going into the final round.

The hot rounds for the day seemed to come from chase card: Aaron Gossage (-11), Anthony Barela (-10), James Conrad (-9), and Adam Hammes (-1). Much like Sexton, Hammes struggled to make greens in regulation, leaving him without enough birdie opportunities to keep pace with his card mates. Gossage and Barela’s efforts have placed them on the lead card for the final day, joining Eagle and Ricky.

Elsewhere in the field, Calvin Heimburg matched Gossage’s hot round, tying him for 10th place, and local favorite James Proctor shot a -9 on the day to rocket him sixteen places into a tie for 10th. Both Heimburg and Proctor each threw their only OB stroke of the day on the hole they bogeyed. Congratulations to Calvin for his ace on the 339’ par three hole 15.

Soaring up the leaderboard into T-16 was Kade Filimoehala, shooting -8. The 2021 DGPT is the first the world has seen of him in the open division though he has already left a crater sized mark on west coast amateur events, winning most of the MA1 events he plays. Last week, he finished 4th at the Challenge at Goat Hill, a testimonial to his consistency, distance and acumen.

Meanwhile, in the FPO division the battle has just begun. Jessica Weese’s lead lasted all of one hole before Paige Pierce confiscated it.  Weese played solid golf for the remainder of the round, finishing the day with a -3, but this was not enough to hold off the 2019 world champion. Pierce found herself -9 through the first eleven holes, but carded three bogeys after to finish the round at -6, giving her a two stroke lead over Weese and Catrina Allen going into the final day.

With this swing of west coast tournaments has brought familiar faces back to the tour, none more familiar than Juliana Korver. Korver spent her years away from disc golf mastering other forms of frisbee throwing, but has not lost any of her skill. Her touch, putting, and finesse have all been retained through throwing a lid and her consecutive +1 and -4 rounds have put that on display. As she continues to get her legs back under her, we can expect nothing less than the world champion we’ve known and loved. The tour welcomes her back with arms wide open and her final round is eagerly anticipated.