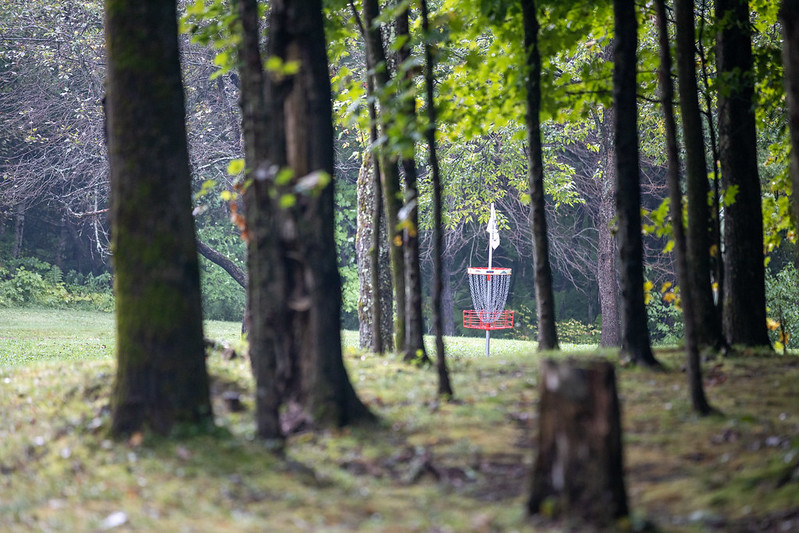 By Jared DiMascioSeptember 10, 2021No Comments

With a blustery start, the second round of Discraft’s Green Mountain Championship, presented by Upper Park Disc Golf brought out some rough conditions and even rougher scores. As the wind gusted early on, the FPO division battled through at the Brewster Ridge course, while the MPO teed off with some heavy wind that died down a bit on the Fox Run course.

Two rounds down and two more left until the end of the Disc Golf Pro Tour season. With one more round at each course for each division, some players will hope they can replicate their first-round success tomorrow, while others will be hoping to write another story when they get a chance to play again.

In the MPO, Chandler Fry (-12) and Matthew Orum (-12) had a lackluster showing at the Fox Run Meadows course, only shooting -1 and -2 respectively. Fry fell off pace as he took a tough quad-bogey on Hole 2 and a double-bogey on Hole 16.  He managed to save his round with some scattered birdies, but not enough to stay at the top, and he fell t o T-9th. Orum, on the other hand, started off hot with 4 birdies in the first 6 holes, but then cooled off as the rest of the day was all pars and two bogeys.

With a bogey-free 2nd round, Chris Dickerson finds himself in 1st place at -21.

The other two players on the lead card, Chris Dickerson (-21) and Andrew Presnell (-18) were able to earn their way back to the lead card for Saturday’s third round. Dickerson had a phenomenal round, shooting a clean -12, with a 157-ft throw-in on Hole 11.

Chris Dickerson is on a mission, he goes 157ft for eagle and now leads at the Green Mountain Championship. 😤 pic.twitter.com/mOdDKWHbT2

Presnell had a great round, with just one blemish on Hole 1, but followed up with 10 birdies over the course of the round.  From the chase card, Andrew Marwede (-15) struggled to score early but did manage to squeeze some in on the back 9, getting 5 of the last 9 holes. However, Ricky Wysocki (-19) found the rhythm and never let it go. With a staggering 72% birdie rate, he jumped from the 3rd card all the way up to 2nd place, just 2 strokes behind Dickerson. Paul McBeth (-13) and Paul Ulibarri (-13), were able to leap up from the 3rd card to the chase card for Saturday’s round, all shooting -5, as well as Matt Bell (-13) and New England youngster Dylan Capaccioli (-13).

In the FPO, Sarah Hokom (E) came out firing, making up 4 strokes, and taking the lead in the first 4 holes at Brewster Ridge. With a birdie on Hole 1 and a bogey on Hole 18, Hokom managed to par the rest of the holes, which was good enough to earn her the top spot at the end of Friday. Catrina Allen (+4), who came in with a few stroke lead over the field, struggled to find her rhythm on throws and shot a +9 round, including two double-bogeys. With two rounds left, she will have to hope to play like she did in the first round on both remaining days if she hopes to hoist a trophy for the second week in a row.

Sarah Hokom played a consistent round at Brewster Ridge, carding 16 pars, but managing to end the day in 1st place.

Paige Pierce (+1) also had an up and down day, carding the most birdies (5), but off setting that with a pair of double-bogeys and a few more bogeys to just shoot +1 on the day. Like Pierce, Hailey King (+3) had a tough round, shooting +6 without a single birdie. Heather Young (+1) was able to capitalize on these slip-ups with a solid round of her own to jump up to 2nd place. She had a chance to jump to 1st, but a costly double-bogey on Hole 17 kept her just shy.

Watch Round 3 of the Green Mountain Championships Friday, September 11th, starting at 9:30 AM on the Disc Golf Network. Follow along with the action on UDisc Live or the PDGA scorecard. And all Round 1 Post-Production rounds can be found on Jomez Pro, Gatekeeper Media, and GK Pro.