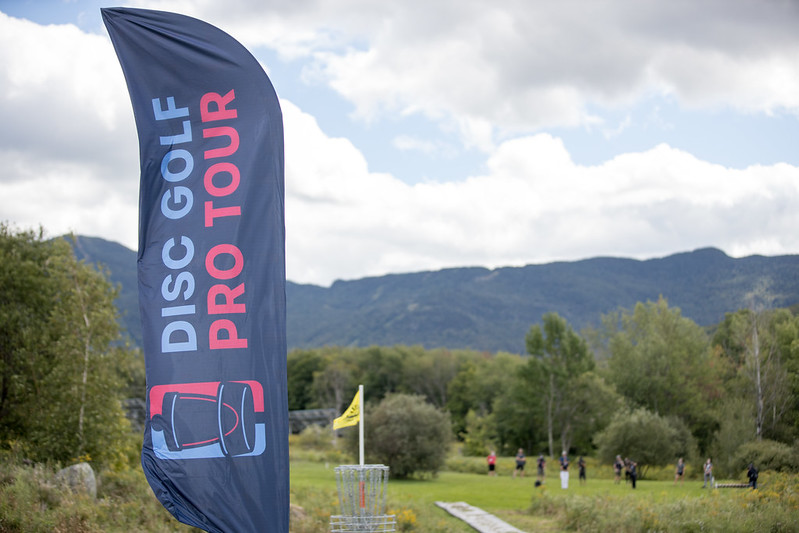 The first round of the Discraft’s Green Mountain Championship, presented by Upper Park Disc Golf was full of great disc golf. From 100-ft jump putts on Hole 1 to 208-ft throw-ins n Hole 18, both divisions proved exciting. As the last stop of the Disc Golf Pro Tour’s regular season, players are hoping to score some last minute points, or to end their year on a high note.

Catrina Allen picked right up where she left off after her win at The MVP Open at Maple Hill, shooting -5 at the Fox Run Meadows Course on Thursday.

In the FPO division, we have a similar start to how the last tournament at Maple Hill ended. Catrina Allen (-5) is continuing her dominance over the field, setting the pace and shooting the hot round of the day. Her only blemish on the day, a bogey on Hole 16, kept her from doubling up the next closest score, Hailey King’s -3. King appeared to have shaken off her performance from the last round at Maple Hill. Despite a pair of double-bogeys, King still finds herself sitting just being Allen in 2nd place, partly thanks to her 208-ft throw-in for Eagle on Hole 18.

Paige Pierce (-1) was on pace to take the lead into the clubhouse, after 9 birdies through 14 holes, but with a string of bogeys and capping off with a double-bogey on Hole 18, Pierce found herself +5 through the last 3 holes. She will head into Friday’s round at Brewster Ridge sitting in 3rd place, tied with Sarah Hokom (-1), who had a much more consistent day.

FPO Round One Notes:

Matthew Orum, fresh off a 4th place finish at Maple Hill and a recent win at the Stafford Open, shot a -10 round on Thursday in Vermont.

Over on Brewster Ridge, the MPO division had a much different showing, as the division’s usual stalwarts didn’t find themselves on the top of the leaderboard after their first round. Chandler Fry (-11) came out throwing and sits in first place, narrowly edging out Matthew Orum (-10), who managed a clean bogey-free round. Behind them, six players are tied for 3rd at -8, Michael Johanson, Zach Melton, Corey Ellis, Chris Dickerson, Andrew Presnell and Andrew Marwede.

With 15 players all within 3 strokes of the lead, Friday’s second round at Fox Run Meadows should be a great one to watch. Players like James Conrad, Paul Ulibarri, Paul McBeth, and Ricky Wysocki are all at -8 and just need a few holes to catch right up to the lead card.

MPO Round One Notes:

Watch Round Two of the Green Mountain Championships Friday, September 10th, starting at 9:30 AM on the Disc Golf Network. Follow along with the action on UDisc Live or the PDGA scorecard. And all Round 1 Post-Production rounds can be found on Jomez Pro, Gatekeeper Media, and GK Pro.