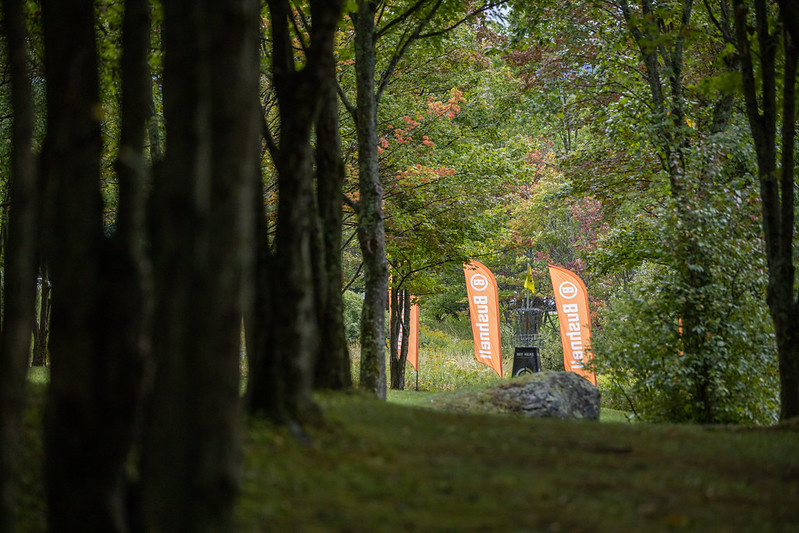 By Jared DiMascioSeptember 13, 2021No Comments

An exciting day for disc golf, as the fourth and final round of Discraft’s Green Mountain Championship, presented by Upper Park Disc Golf brought us some great play and down-to-the-wire excitement in both divisions. As the last event of the DGPT regular season, competitors who made the final round cut were all hoping to end it on a high note, hoping to make a push into the DGPT Championship, to move up a grouping for an extra bye, some prize payouts, and of course, the trophy.

With the weather cooperating for a beautiful day of calm wind and bright sun, players hit Brewster Ridge and Fox Meadow Run for one last time this weekend, with the leader in both divisions having to stave off a great round from someone trying to chase them down.

In the MPO division, it looked like Chris Dickerson (-41) was going to run away with the tournament, coming in with a bogey-free tournament, shooting the hot round each day, and a 5-stroke lead over second place. However, Ricky Wysocki (-38) had other plans. Wysocki quickly started piling on birdies, as did Dickerson, and when Wysocki took two bogeys in a row on Holes 8 & 9, it looked like it was all over for the 2-time World Champion. Wysocki followed those up with 5 straight birdies, while Dickerson took his first bogey of the tournament on Hole 11, and a double-bogey on Hole 16. Now Ricky was just 1 stroke back heading into the final hole. Dickerson played calm and consistent, throwing a perfect drive and upshot, leaving Ricky’s only hope of winning by throwing in a long upshot, which unfortunately found its way OB. Dickerson’s -7 final round was good enough for him to claim his first DGPT regular-season win, while Wysocki would finish in 2nd.

In the FPO, Hailey saw her lead deplete as Sarah Hokom (-6) opened the day with a birdie on Hole 1, while King took a double-bogey on Hole 2. As Hokom strung up 4 birdies in 5 holes down the middle stretch, King was able to earn a few birdies, but also took a pair of bogeys and a double-bogey on Hole 13. Heading into the last 3 holes, Hokom had a 2-stroke lead over King. But King was able to regain her focus and birdie both Hole 16 and 17, while Hokom took pars on both. Tied heading into the last hole, both players had solid drives and upshots, but Hokom’s putting game finally faltered, as she missed a putt from C1 and took a bogey, while King was able to play for par and win the tournament by 1 stroke.  This is King’s first DGPT Elite Series event win of the season, but she has won 2 PDGA National Tour events, the Dynamic Discs Open, and Texas States.

Hailey King wins her 2nd DGPT event of the year by a stroke over Sarah Hokom.