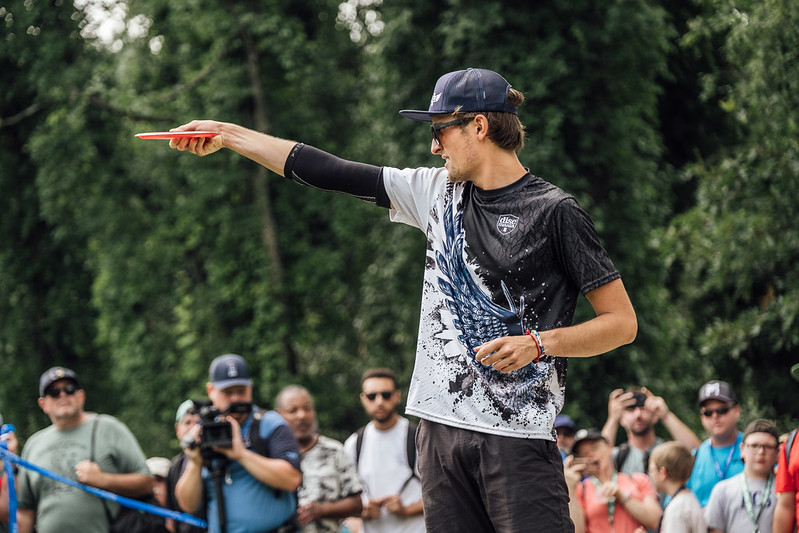 By Jared DiMascioJuly 25, 2021No Comments

The final round of the Discraft Great Lakes Open was exciting from start to finish and made for some great live disc golf. In the first of four consecutive weekends of DGPT tournaments, there was a down to the wire race for the lead and came down to the 18th Hole in both divisions.

The MPO lead card started their day with a scare from the chase card as James Conrad (-23) had started off by getting birdie after birdie, birdieing 8 of the front 9 including 8 straight birdies. Eagle McMahon (-28), Kyle Klein (-27), and Kevin Jones (-22) all started the day tied for 1st place, but unfortunately, Jones quickly fell off the pace with some missed putting opportunities on the early holes that continued down the stretch of the course. Other players like Adam Hammes (-23), Emerson Keith (-23) and Corey Ellis (-24) all had dominant performances throughout the day and fell just short of making a meaningful push for the top of the podium.

World Champ James Conrad racked up 8 straight birdies from Hole 2 to Hole 9, but found the back 9 harder to score on and ended his run tied for 4th.

McMahon and Klein had a battle throughout the entire round, and with a bogey from McMahon on Hole 13, it looked like Klein had the chance to punish him for it. However, McMahon birdied two more holes after that while Klein could only par out. With a 1 stroke lead heading into Hole 18, McMahon and Klein’s drives each landed 38-feet from the basket. McMahon took his time and sunk the C2 putt, cementing his lead and the tournament win. Klein did manage to also hit the putt, which would have forced a playoff had McMahon missed his long putt.

McMahon was able to hold onto the DGLO crown with his back-to-back wins and has won 4 of 7 DGPT events this year, and 6 of the last 13

Several players were in the hunt coming into this final round, but the leaders just did not relent and maintained their lead over the rest of the field. However, another big story of the day belongs to Corey Ellis, who managed to build on his previous rounds and crush impressive shots all day. From the chase card, he managed to jump over the likes of Adam Hammes, Emerson Keith, Kevin Jones, and James Conrad to finish with sole possession of 3rd place.

Corey Ellis capped off the weekend with a -9 round, after shooting -8 and -7 in the first two days of DGLO to take a seat on the podium in 3rd place.

The FPO division started off with a scare, as well, as Page Pierce (-19) had come into the day with a 2 stroke lead over Kristin Tattar (-20) and took a triple bogey on the first hole after an errant tee shot. She was able to fight her way back to tie Tattar and the two had a battle down to the finish. Catrina Allen (-11) had a few strokes to overcome if she hoped to take the win from either of these two, but struggled through the early and mid parts of the course, managing a couple of bogeys and finding it hard to card birdies.

Tied coming off of birdies on Hole 15, Pierce and Tattar parred the following hole, and on 17 Pierce got a birdie while Tattar managed to sink a 49-foot putt for the eagle and a 1 stroke lead. As the lead card came to hole 18, we were left with de ja vu as both players teed off. Pierce was unable to throw in the long approach and Tattar was able to take the easy par and her first DGPT win of the year.

Kristin Tattar won her 1st DGPT event of the season, after a PDGA win at the Clash at the Canyons and a 3rd place finish at the Des Moines Challenge.

Allen was left in limbo as she couldn’t quite gain enough strokes to challenge either of the leading ladies, but had enough of a lead over the rest of the pack to take solo 3rd place. Hailey King (-7) was coming off of a hot round on Saturday but just couldn’t quite find a groove today as she could only pull off a -2 round. However, Heather Young (-7) shot the 3rd best round of the day, -4, on the back of some clutch puts, like this one below;

Next weekend the Disc Golf Pro Tour heads to the Black Bear course at The Preserve Championship, in Clearwater, MN for July 30th – August 1st. Watch live play all days on the Disc Golf Network, and learn more about the tournament, spectating information, and everything else here.