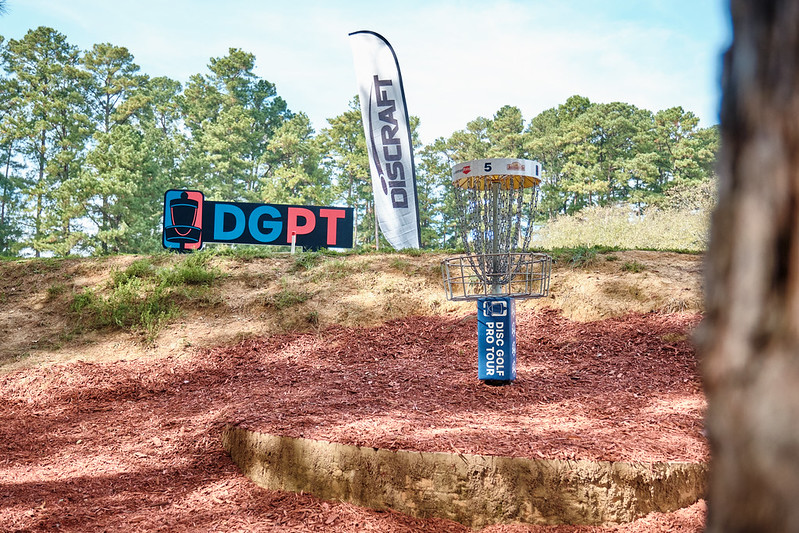 By Jared DiMascioOctober 17, 2021No Comments

And then there were 8. With the Semifinals round now behind us, the Disc Golf Pro Tour Championship has found its finals field. 12 MPO and 8 FPO players took to Hornet’s Nest Park for the 3rd of 4 rounds at the Charlotte, NC course yesterday in hopes to come out victorious.

With the prestige of being crowned the DGPT Champion, as well as a winner’s purse of $30,000, there was a lot on the line for Saturday’s round if any of the competitors wanted a chance to fight for the title.

In the MPO division, we saw a lot more of the same. Nathan Queen (-7) and Drew Gibson (-8) have just been dialed in at Hornet’s Nest so far this weekend. They were both able to light up the fairways and baskets with tight throws and great composure, each only with one blemish on their scorecards and a whole lot of blue. Youngster Gannon Buhr (-6) was also continuing to play his dominant game at this course, but unfortunately found himself carding two bogeys on Holes 15 and 16, and just wasn’t able to make up lost ground and ended up T-5th, falling one stroke short of Queen and Gibson. Had he been able to snag one more birdie, he would have been able to jump Queen due to their DGPT seasonal points.

Nathan Queen, coming in as the 28th seed, has won his way through 3 rounds now and is onto the Finals to battle it out with the remaining 3 players.

Discraft pros Paul McBeth (-7) and Adam Hammes (-8) continue with their dominant seasons, putting up great rounds and earning a spot in the finals. McBeth is fresh off a USDGC win and Hammes is looking for his 4th win of the season.

Much like in the earlier rounds, we saw some notable favorites struggle through the tricky trees of Hornet’s Nest Park. Ricky Wysocki (-5) who came in as the 1-seed started off the day with a quadruple bogey on Hole 2 that he was not able to recover from. Though he birdied 9 holes on the day, his +4 strokes from that hole were a weight he just couldn’t shake off and ended up falling a couple of strokes short of making the finals. Other favorites like Kevin Jones (+1), Kyle Klein (-5), and Calvin Heimburg (+2) are surprise misses for the final round. Klein ended up 1 stroke short while Jones and Heimburg both struggled hard, despite both of them making the final round last year, and Jones winning the 2020 DGPT Championship. This year they will have to watch with the rest of the gallery.

With no Jones or Dickerson in the finals, we’ll have a new champion for the first time since 2017 in the MPO division. Can Queen keep up his pace for a 4th round, and Gibson a 3rd? Or will the USDGC Champion and World’s runner-up stag yet another title?

On the FPO side, once again a similar story. Dominance from Hailey King (-3) and Heather Young (-3), both players who had played their way into the Semifinals, and a tough round for some favorites like Paige Pierce (+2) and Catrina Allen (E). Young started off hot, snagging 4 birdies in a row, but then hit a lull, shooting +2 over 9 holes, before finishing off with a pair of birdies on Holes 17 and 18 to secure her spot in the final round. Hailey lead the day in birdie percentage with 44%, and despite a few bogeys, she was still able to hold onto her lead and finish the day at -5, tying for the hot round.

Heather Young, the 9-seed, leads the Championship with 5.82 strokes gained from putting, which has helped her earn her way into the Finals.

Missy Gannon got her work done early and then coasted to victory as she birdied 4 out of the first 6 holes, and then settled for par from there on out (with another bonus birdie on Hole 14). The TPDGC Champion played very consistently and was the only player in both divisions to not card a single stroke over par.

Both Allen and Kona Star Panis (+1) seemed to be off on the right pace, Allen at -4 and Panis -3 through the first 6 holes. However, Hornet’s Nest decided to put a stop to their impressive starts, as they both shot +4 from there. Pierce struggled early, going bogey-birdie-double bogey-bogey on the first 4 holes. She was able to find a few birdies in the middle stretch, but another double bogey brought her off track and from there she only managed to par her way out of the round.

Will King be able to defend her 2020 title? With Young showing that she can put up a great round every day, and with Gannon and Hokom joining the fray, it could be anyone’s championship in the FPO division.

Watch the last and Final on Sunday, October 17th on the Disc Golf Network. The FPO tee off at 10:00 AM EST, while the MPO tee off at 2:30 PM EST. Follow along with the action on UDisc Live or the PDGA scorecard. And all Semifinal Post-Production rounds can be found on Jomez Pro, Gatekeeper Media, and GK Pro.