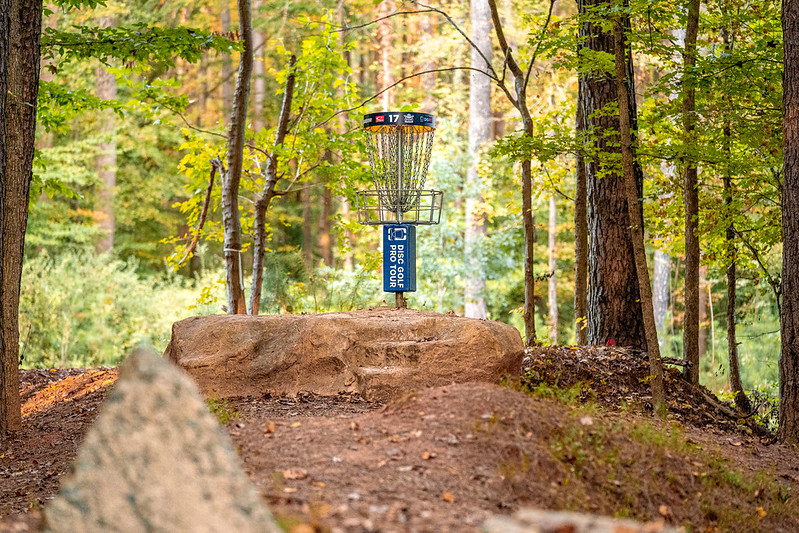 By Jared DiMascioOctober 14, 2021No Comments

Hornet’s Nest Park showed its stinger today for the first round of the Disc Golf Pro Tour Championship. 16 MPO players battled it out through the woods of the Charlotte, North Carolina course trying to navigating tight lines of the fairways.

With only 4 players able to move on after Thursday’s round, each player would have only one shot to shoot their best in hopes of it being good enough to move onto the Quarterfinal round on Friday, where another 8 MPO players will be waiting for their chance to prove themselves.

Out of the gate, Nathan Queen (-6) set the pace and kept at it, carding 5 birdies on the front 9 before slowing down a bit and picking up a pair of bogeys and three birdies on the last 5 holes. His great placement on drives and upshots gave him chances that he capitalized on, hitting 5 putts from C2, as well as a 90-ft throw-in on Hole 18 to cap off his stellar round. The other lefty of the round, Chris Clemons (-4), also managed to slice and dice up the fairways with his smooth forehands, taking birdies when he could, but mainly carding pars which were good enough to get him to the next round.

Behind these first two, there was a battle to see who would take the next two spots. Players like Thomas Gilbert (E) and Andrew Presnell (E) both seemed to be making early runs, but ultimately fell off the pace and came up short.  On the other hand, players like Raven Newsom (-3), Ben Callaway (-2), and Chandler Fry (-2) all were pushing down the stretch. But they too couldn’t string together enough birdies to bring their scores down. Hometown hero Jeremy Koling (-1) seemed like he would hold on for the Quarterfinals appearance before a pair of tough bogeys on Holes 17 and 18 took him out of the running.

Young gun Gannon Buhr (-3) started the day with a pair of bogeys but managed to snag 5 birdies on the day and kept the rest of his scorecard clean, earning him a chance to play Friday’s round. And rounding out the winners, Emerson Keith (-3) also started off the day going bogey-birdie-bogey before finding his pace and really playing clean down the final stretch, getting 3 birdies on the last 4 holes.

Watch the Quarterfinal rounds on Friday October 15th on the Disc Golf Network. The FPO tee off at 10:00 AM EST, while the MPO tee off at 2:30 PM EST. Follow along with the action on UDisc Live or the PDGA scorecard. And all Quarterfinal Post-Production rounds can be found on Jomez Pro, Gatekeeper Media, and GK Pro.