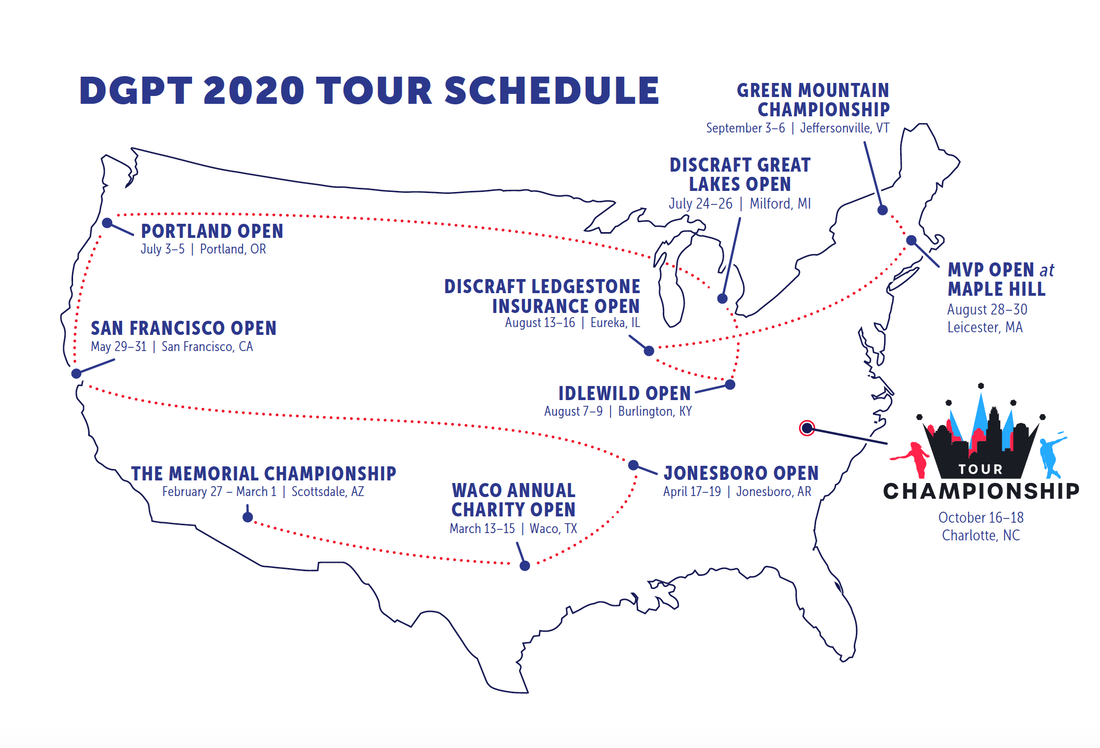 The 2020 Tour is split into four distinct regions, The South, The West Coast, The Midwest, and The East Coast. Each area will feature Elite Series events from both the Disc Golf Pro Tour and The PDGA National Tour.

The South
The Disc Golf Pro Tour will officially kick off the PDGA’s Elite Series events with the Memorial Championship February 27th – March 1st. It will be one of only three tournaments in 2020 to span four days of competition (the other being the Ledgestone and GMC). The Tour will then take a break for two weeks before returning March 13-15th for the Waco Annual Charity Open. Following the Waco Annual Charity Open will be the first National Tour Event, the Texas States, which will be in Tyler, Texas. The next week will be Collegiate Nationals (a PDGA Major), which moves to Rock Hill, SC, for 2020. The Disc Golf Pro Tour will pick back up in Jonesboro, AR for the Jonesboro Open, April 17-19th. The South quadrant of events will wrap up with the Glass Blown Open a PDGA National Tour event, April 29-May 2nd.

The West Coast
Two weeks after GBO, the National Tour will have its third stop at the Masters Cup in Santa Cruz, CA, May 15-17th. The next weekend will be the USWDGC a PDGA Major in Placer Valley, CA. The fourth stop on the Pro Tour will be the San Francisco Open, which will take place May 29-31st. The Disc Golf Pro Tour will take another month break for a slate of PDGA Majors and an NT, which include Tim Selinske, USADGC, and Pro Worlds, the last of which will be in Ogden, UT June 13-20th. The National Tour will pick back up with the Beaver State Fling June 26-28th in Estacada, OR. The Disc Golf Pro Tour’s fifth stop will be the Portland Open July 3-5th. The Portland Open will complete the West Coast swing and give players time to head overseas for the European Open before returning to the Midwest for the next section of the Tour.

The Midwest
The Great Lakes Open will kick off the midwest section of the Tour as the sixth stop of the 2020 Disc Golf Pro Tour. It will take place on July 24-26th. Two weeks later will be the Idlewild Open in Burlington, KY August 7-9th. The next week, August 13-16th will be the eighth stop on the Pro Tour the Ledgestone Insurance Open. The Disc Golf Pro Tour will then take a two-week break as it transitions over to the East Coast for the final leg of the season.

The DGPT is excited to announce a change in our test event program in the near future. We are currently working with 2019 test event TDs to establish the final details of a new series that will bring more prominence to events affiliated with the Pro Tour at the previous level of test event. If your event is interested in being considered please fill out the linked form . For the PDGA’s release and A-Tier selection please review the linked post .

We are excited about the 2020 season. We hope you are too! Let us know in the comments which event you plan to spectate at, and we will look forward to seeing you out there!