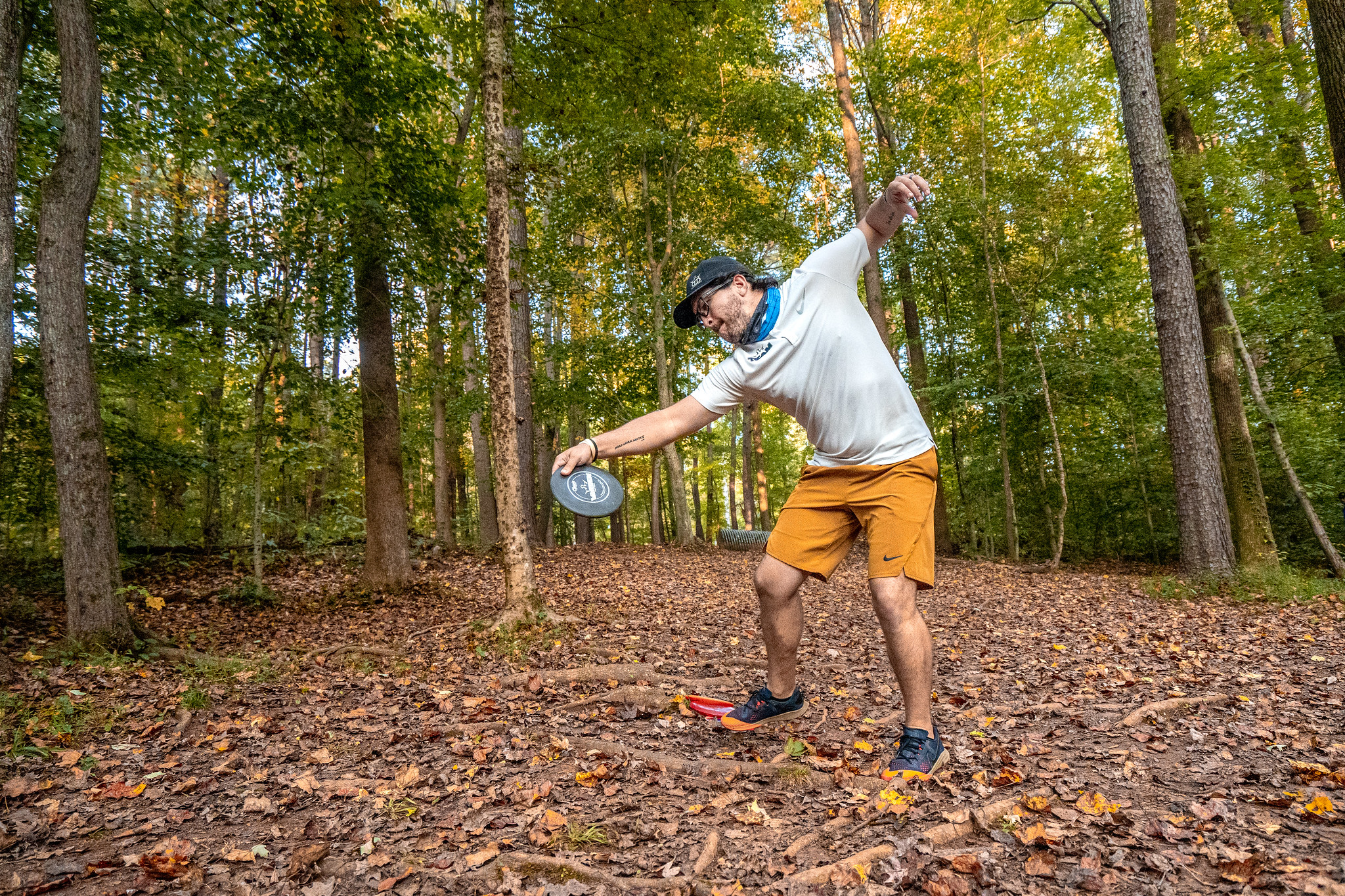 The second day of competition at the 2020 Disc Golf Pro Tour Championship presented by GRIP6 is in the books. In both divisions, twelve competitors started the day, and only four advanced.

Of the three FPO cards in the field, only two saw players advancing to play in the semifinals.

The women on the first card of the day struggled to get anything going which resulted in none of them seeing the semifinal round.

On the second card, all four players were in contention throughout the round. Rebecca Cox and Ellen Widboom missed the cut by one stroke, finishing in a tie for fifth for the day at three-over-par. Widboom was one-under-par going into the last three holes when two bogeys and a double-bogey on hole eighteen kept her from a shot at advancing to the semifinals.

The other two players on the card, Holly Finley and Lisa Fajkus, had two different routes to their even-par rounds. Finley, a wood-golf extraordinaire, found four birdies in the middle of the round to help offset the bogeys she gained at the round’s opening and closing. Fajkus carded a triple-bogey seven on hole four and then spent the rest of her round recovering. With only one bogey and four birdies on the back-nine, Fajkus will be looking to clean up her front nine performance in the semifinals to have a shot at making it to the finals.

On card one, the entire card was on pace to advance to the semifinals until the turn. On the back-nine, Kona Panis struggled to avoid the bogeys, and a double-bogey on seventeen sealed her fate. Heather Young looked like she was in a position to advance until a triple-bogey-seven threw her off track on hole eleven. Leaving the two players who were able to advance: Missy Gannon and Jessica Weese. Gannon eeked her way into the semifinals. She carded three bogeys to finish out the round. She will need to improve down the stretch for a shot at making Championship Sunday. With five birdies and three bogies, Jessica Weese was able to advance to the semifinals with the hot round of the day. Weese found her success on the front nine of the course and then coasted into the clubhouse.

Weese, Gannon, Finley, and Fajkus are advancing to the semifinals to play alongside Paige Pierce, Catrina Allen, Sarah Hokom, and Hailey King to determine who will be playing on Championship Sunday. Tune in to watch live starting at 9:35 AM ET on the Disc Golf Network.

The MPO division saw players from all three cards advancing to the semifinals round.

On the 2 PM tee time, which comprised all of the players who advanced from round one, Eric Oakley led the charge. Oakley tied for the hot round on day one and set the field’s pace on day two. His next closest competitor on the card at the end of the round was Andrew Presnell, who fought back to recover from a quad-bogey eight on hole three. Oakley had only one bogey on the day and sealed his spot in the semifinals with a throw-in birdie from 70 feet on eighteen. With plenty of time to sit and watch the scores come in, Oakley said if one of his colleagues carded a hotter round and bumped him out, he couldn’t be mad because he gave it his all.

The 2:30 PM tee time saw two players punch their tickets to the semifinals. Kyle Klein and Austin Hannum each took unique paths to their six-under-par performances. Klein started his round with two bogeys to then finish his round with eight birdies and eight pars. Hannum started at two-under through four before carding a double-bogey six after going out of bounds on five.

The 3 PM tee time, which featured the players seeded nine through twelve, saw only the card’s leader, James Conrad, advance. Conrad took a unique path to advance, carding five birdies on the front nine and then playing for par the rest of the round.

The MPO live coverage will begin at 2:35 PM ET on the Disc Golf Network. Make plans to tune in and watch!