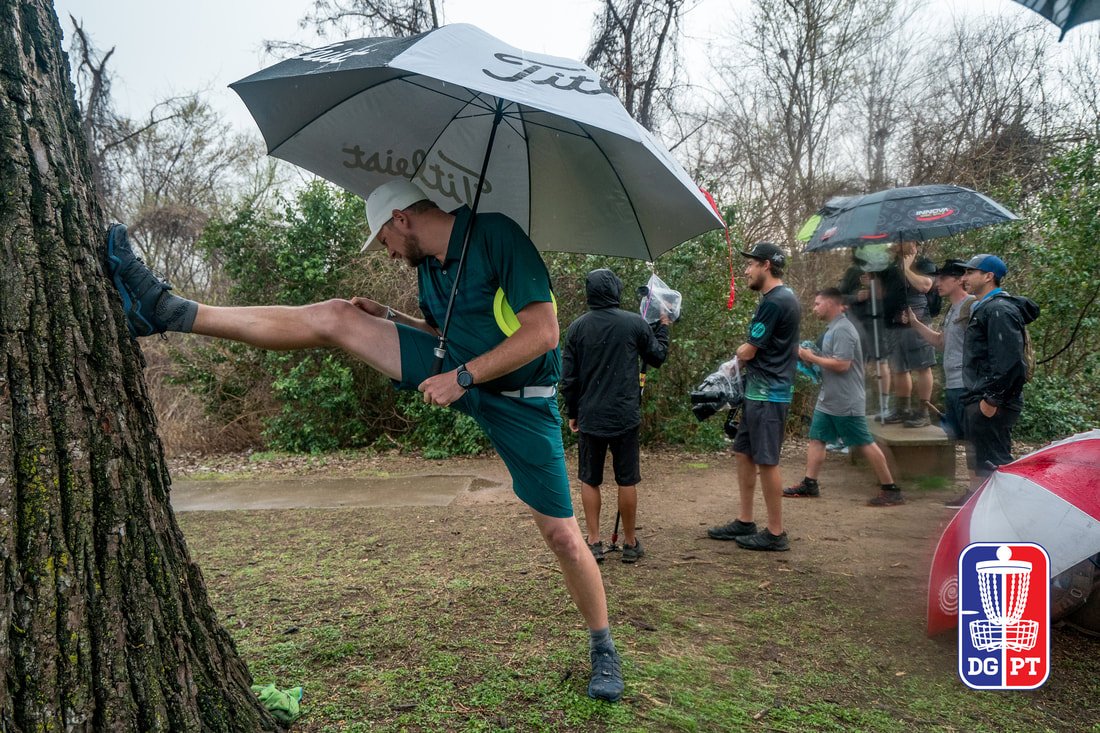 ​Focus and precision. That is what a competitor needs to be relevant at the 2019 Waco Annual Charity Open presented by Dynamic Discs. By mid-afternoon, elite scores were coming in from
the course, 10, 12, 14 under par looked comfortable. But the last couple cards of the day had something to say about that. By time all the men’s cards were turned in there were nine players double-digits under par. At the very top of the pack – your “top dawgs” as Nate Doss likes to call them – is your defending champ, Jeremy “Big Jerm” Koling. The guy is practically a whole new player on this course, scoring a smoking hot 15 under par, currently rate 1082. Ricky Wysocki is one behind him at 14 under. Nate Perkins – a playoff challenger of Jerm’s last year – is third place at 13 under. Tied for fourth is Matt Dollar and Paul Ulibarri with their 12 under par rounds.

If you were Big Jerm you’d be striding as confidently across the course today. Two consecutive wins at WACO is a healthy dose of momentum to start the 2019 loop with. It’s a forehand dominant player’s paradise and he made the best of that fact. Picking up an eagle on the 519 ft. par 5 that has punished players with the dreaded snowman today was a nice start. Putting from the rough and bouncing off the top of the basket for eagle on the next par 5 was the announcement to everyone in Waco, TX today that he is looking to defend what could be another signature win. That plus his 13 birdies. After twelve holes he was 11 under but hit his only hiccup of the round – 2 par’s in a row – as the fairways transitioned from extra narrow to extra windy. Don’t worry he bounced back with four more birdies to finish the round. And caught the band for eagle on hole 18. He can’t relent though, because there are plenty of players nipping at his heels.

Ricky Wysocki didn’t eagle today. It’s okay though, that’s not keeping him from a spot on tomorrow’s lead card. There’s something heart-warming about seeing ol’ Raptor Legs in the top of the pack. And throwing Innova plastic again too? What year is it? If 100% scramble, 89% Circle 2 In Regulation, and an average 38’ throw in distance doesn’t prove to you that he’s probably comfortable with the “new” plastic then I don’t know what would. He’s got the drives, the approaches, and the putts to show off why the player is that much more important than the bag. The guy bookended his day with five birdies. That’s in the “open” part of the course, but he was no slump in the formidable forest, carding four birdies in the middle six holes. On a forehand friendly layout like this, it’s no surprise to see Ricky in the top spots.

Nate Perkins pretty much skipped through the day as a local Texan should. This is where the man is at home. He started his day caddying for Paige Pierce and she was caddying for him this afternoon as he absolutely shredded the course with perfect forehand after perfect forehand. In the woods? No problem. In the wind? No problem. But perfect drives demand perfect putts. Circle 2 for birdie with a steep drop off behind it? no problem. Perkins more than earned his 100% Scramble Badge today. If you could eagle tomorrow that would be great Nate. Thanks.

Matt Dollar gets a 100% Scramble badge for his 12 under par round today too, and his share of a tie for fourth. Well done, sir. And an eagle? Dang, nice work. Scoring a 55 on a par 67 course is a great round. 89% in Circle 2 and 61% in Circle 1 plus a single miss from Circle 1x is deserving of his ranking in the stats and his spot on tomorrow’s lead card, which he earned over Ulibarri for his PDGA number.

Paul Ulibarri had a double bogey today. But that’s okay, he also had an eagle, plus 12 birdies, so he finished at 12 under par. Looks like switching to Discraft hasn’t been too hard on the seasoned veteran at all. He also parred hole 1, but that’s okay, he bounced back with seven birdies in a row and capped that off with an eagle on hole 9, joining the other six players who got a three there too. That’s a perfect 9 under front 9. He’ll lead off tomorrow’s chase card with his share of a tie for fourth with Dollar.

The conditions today were nowhere near perfect. Sure, when your card was in the woods you got some relief from the wind, but you also had to face some of the densest rough on the Pro Tour. The rounds today are more than deserving of their tentative ratings, with tomorrow’s lead card averaging 1071.5 on today’s rounds who knows what they’ll putt up when they are all on the same card pushing each other on each and every throw. You don’t want to miss any of that action so make sure to catch our live feed tomorrow at 11:00 AM EST for the Women’s Division and at 4:30 PM EST when the lead card tees off for moving day of the 2019 Waco Annual Charity Open presented by Dynamic Discs.