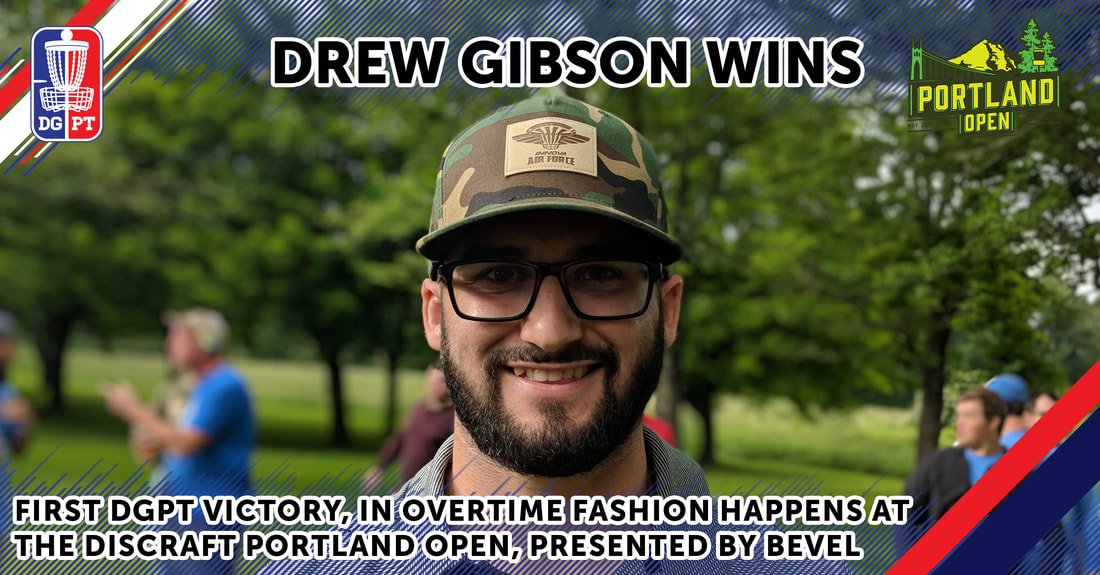 Oh dang. That was some stupid good disc golf. We started the final round of the 2019 Portland Open presented by Discraft and Bevel Craft Brewing with Simon Lizotte and James Conrad tied for first at 18 under par. By the time they had finished hole 12, Simon was in second and James was in a tied sixth. At that very moment, Eagle McMahon, from the chase card had birdied hole 15, making things look like Lizotte was chasing McMahon now. That is just a snapshot of how close things were because if the two crush boys battling wasn’t enough for you, let’s just throw in a charging Drew Gibson. Coming down the final stretch it was between the three of them. By the time the chase card finished their round, Eagle and Drew were tied for first and Simon was only two back with three to play. I’ll tell you this now but you have to promise to keep reading or at least go watch. Drew won, Eagle took second, Simon took third, and a bunch of other amazing guys were right behind them. Now, let’s climb the podium.

Simon Lizotte had the distinct honor of starting the round tied for first. But as we already mentioned by hole 12, he was already trailing. But when you know the shape of the window you have to hit, and you’re Simon, you hit it. On the tee of 16, he had three holes left to play and every other card was done. He had two throws to make up for the tie. But birdie out and he wins. A strong drive followed by a less than ideal approach left him a just outside the circle putt for birdie on the elevated pin. Just before he could take his putt, Kevin Jones had to slam one home…and then get what must have been the worst splash out of the day – dead center pole, in the meat of the chains, on the ground. There’s nothing like a nasty chain out to make you doubt your putt, but Simon squeaked it in anyways.

These last two holes deserve their own breakdown. Simon had the box on hole 17, but his drive left him short and left. The approach didn’t get him that much closer to a birdie either. Without that birdie, the best he could now do is tie Gibson and McMahon. His third toss was a keen sidearm roller that got him as close as it could, but birdie was all but out of the question. As Nate Doss called, it this last shot here might as well be the “shot of the tournament” for Lizotte. His par was an essential step on his way to his part in the playoff. His Sky God II more than delivered, leaving him an easy putt for par and one last chance at his part in the playoff. On to the tee of 18 for his last chance – birdie or third.

18 played the fifth easiest on the day so it was more than within his capabilities. Compared to yesterday, he made the correction. Keeping his drive far enough right rather than too far inside on the left. Alas, Simon problems, he had overshot the landing zone if you want that pure and clean straight look at the green. This time it was a real problem though. For his second shot, he chose the high hyzer on the right but landed it just off the left. It actually bounced off the Pro Tour wall to stay in bounds leaving him a lengthy putt for birdie. Nevermind birdie – make the putt. Playoff, miss it, third. 50’. Up. It was high enough. But only for a moment before it hit the Pro Tour tower below the elevated basket and he lost his chance at the playoffs. That’s the show we got to watch on live today, but that chase card had a few things to say.

After the lead card finished their round and Simon Lizotte was confirmed to be out of the running it was left to another two crushers. Eagle McMahon and Drew Gibson. That’s right, we’re at Blue Lake and there’s a playoff, and it’s not Wysocki and McBeth this time. What’s truly unreal about this is that they both came from the Chase Card. McMahon has been here before. He’s won a few big events or two before. This would be a huge win for Gibson if he could snag it. They knew the position they were in so they were more than ready when they hit the teepad of hole 1. Both of them birdied this hole to start their rounds about 3 or 4 hours earlier today. Eagle had the honors of teeing off first but his drive left quite a bit to be desired. His roller attempt chopped through some cabbage in the canopy before rolling towards the OB right. Gibson licked his chops and squared up what is the biggest tournament moment of his life. He opted for the air shot, but caught a late branch and fell to the center of the fairway. The two competitors walked towards the basket without a call from the spotters, but likely they didn’t want to deliver the bad news. Eagle was out of bounds and left with a monster putt for the circle 3. That left Gibson with an easy approach for par. Lucky for him today, in this playoff, par is how we say, winner. To be clear, it wasn’t a tap in, he left himself a solid 20 footer.

Drew Gibson could have taken the tournament without a playoff. That is until a jaw-dropping error on hole 16 when he missed a tap in putt on the elevated basket. But he fired right back with two birdies to finish the day and tie Eagle McMahon. Not that Eagle didn’t give him back the same mistake with his putt for birdie on 18. I’d tell you about all the stats but this tournament was far too tumultuous to lean on those numbers. The only player to stay on the lead card after round 1 was Simon Lizotte and then he was the only player in the top three at the end of round 2 to stay on the podium. But the real survivor has to be Drew Gibson. I was once chatting with the Pro Tour Staff last year when they jokingly told me that Drew Gibson had been at more events than they had. The guy has been at every event until the last couple because of injury. I guess we’ve got a bit of a “rookie of the year” on our hands. Except this time the “rookie” is one of the most experience on the tour. Congrats Drew, what an incredible win.

Eagle McMahon is disgusting. That guy actually carded three pars in the first 12 holes! Can you believe that? He’d go on to only card three more pars, finishing the round at 13 under par. You might think that’ a fantastic finish until you hear about his final putt. Squaring up 18’s elevated basket Eagle was looking at birdie, smooth yet firm, he fired just a hair left. Chains. Cage. Swirl. Drop…to the ground. With that single missed Circle 1X putt he was tied with Drew Gibson who had birdied 18. The emotion was real and raw. He knew the repercussions of that kind of slip. He had given Lizotte a pathway to a solo victory. Not an easy path, but a path none the less. As we now know, Lizotte wouldn’t catch them, and the tie would be left to them. It’s hard to say anything else about Eagle’s day except to say, I bet that guy wishes he had that putt on 18 again.

Honestly, this is the best kind of disc golf I like to watch, but it’s some of the hardest to write about. Only one player led more than a single stat in the field and that guy didn’t even win! It was Seppo Paju who parked 22% of the baskets for birdie or better and scrambled 92% of the time. He threw single birdie on hole 8 in round 2. What?!? That’s crazy. As we wind things down here it wouldn’t be a good read without an eagle update. No not McMahon, I mean a 240′ eagle throw-in from Austin Hannum on hole 5. Why can’t we catch that on the lead card! Well, we got to see plenty of huge makes anyways. We’ll be gone for just a few weeks but don’t forget to put us on your calendar – Ledgstone – June 21-23. Be there or be square.