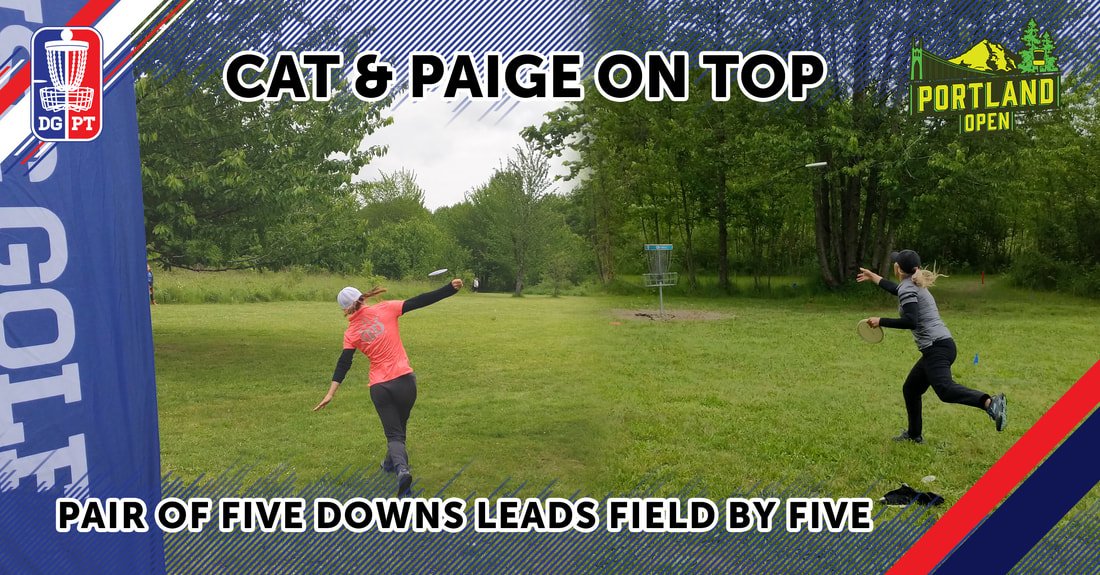 Discraft’s Portland Open round one is in the books and unsurprisingly the classic remains contemporary – Paige Pierce and Catrina Allen have already started to peel away from the rest of the pack but they can’t shake each other quite yet. These two contemporary legends are locked in a tie at 5 under par. Seriously, how many times has this actually happened? After them, you have to jump 5 throws back to see Lisa Fajkus and Paige Bjerkaas tied in third place even to par. There’s a ton of birdies available out at Blue Lake but there are also still five baskets that have yet to be birdied. Hopefully, we’ll get to see some of those on tomorrow’s lead card live footage. But for now, let’s get into today.

Ranked 1st in 5 stats, Catrina Allen is hard to beat right now.
Not only has Catrina Allen been on fire lately but her putt was absolutely on fire inside Circle 1 today, missing only 1 out of 11 putts inside the 10-meter ring. The first third of her day was the slowest, after a bogey 5 on hole 3, she carded her first of 7 total birdies today. After that, she started cruising on a steady stream of birdies and pars. Including a 49’ jumper on 15 to save par when she really needed it to stay neck-and-neck with Pierce who was just a few baskets ahead of her carving a path towards the hot score of the day. Step by step, Catrina’s score crept lower and lower just as Pierce’s did until she found stumbled on tee and fairway of 17. An early tree on her drive left her in less than ideal position. Her second throw wasn’t much better, finding yet another tree. There’s a reason that hole 17 played fourth hardest on the day. No big deal. Catrina closed out the day with her second Circle 2 putt of the day on the elevated 18th basket for a 38’ birdie to tie Pierce for first. Speaking of Paige Pierce…

Paige absolutely caught fire in the middle of the course. Starting on hole six, she carded 5 birdies in a row, including a 60’  birdie 4 on the 825’ par 5 hole 7. The only other player to streak that hot was Missy Gannon who’s currently tied for 14th. Pierce was clearly feeling it as she just kept that rolling for three more holes. Another bogey on hole 12 was worked off with a birdie on hole 15. Pierce wrapped up the day with 2 pars and final birdie on 18. Earning her half-ownership of the lead with Catrina Allen. We didn’t get to see Pierce’s round live but a quick look at her stats on UDiscLive will show a number of 1st place ribbons. It’ll be great to see how she shreds Blue Lake tomorrow on the lead card. Especially since it will be yet again in a fierce battle with Catrina Allen.

“Nice Line” Paige! 86% Scramble, I bet there’s at least one shot she’d like to break down on her show in there.

Joining Paige and Catrina on tomorrow’s lead card and tied for third will be Lisa Fajkus and 2018 World Champion Paige Bjerkaas. Lisa played well from the tee and fairway but did not take full advantage on the green, making 60% of her Circle 1X putts compared to her season average of 64% and not collecting a single Circle 2 Putt. Capitalizing on the opportunities she had on baskets 4, 5, 17, and 18 amounts to the deficit she’ll face tomorrow when she tries to catch the leader. Bjerkaas fared better on the green at 78% in Circle 1X but she tested that twice as much as Fajkus taking a total 9 from Circle 1X to Fajkus’ 5. Fajkus did find one more birdie than Bjerkaas, but she also found one more bogey. They’ll be a fantastic battle to watch on tomorrow’s lead card and with any luck, they’ll motivate each other enough to chase down Pierce and Allen.

The Chase card isn’t far back though. Rebecca Cox finished round one 2 over par but also carded four birdies. Hole 11 looks to be a good early bet for her nemesis this weekend with her double-bogey 6. But she’s got hole 9 on lock, parking her upshot for a birdie 3 on the 515′ par 4. Jessica Weese, at 3 over par, just couldn’t find enough birdies out there today, in part due to missing four putts inside Circle 1. She’s followed by Vanessa Van Dyken rode the roller coaster today, carding 5 birdies but suffering 8 bogey throws. Five of those were the result of OB penalties. Her day had started so hot though with a 60’ make to be the only player to birdied basket #1. Behind them in a tie for 9th is Madison Walker and Hailey King who both found 3 birdies but lost 7 back on bogeys or worse.

Blue Lake Disc Golf Course is working out just fine I’d say. We’ve got a bit of the standard separation we’ve been seeing lately, but that doesn’t mean the 9 players who are within 5 of third place aren’t going to do everything they can to make a move on our leaders. Don’t get me wrong, I also can’t wait to watch Paige and Catrina start Round 2 of Discraft’s Portland Open tied at 5 under. That’s a recipe for a legend if I’ve ever seen one. Make sure you don’t miss the action as things continue this afternoon for MPO and tomorrow at noon EST for Round 2. Or if you’ve got the weather get out there and play!

This article written by Staff Writer and Editor Zach Podhorzer.