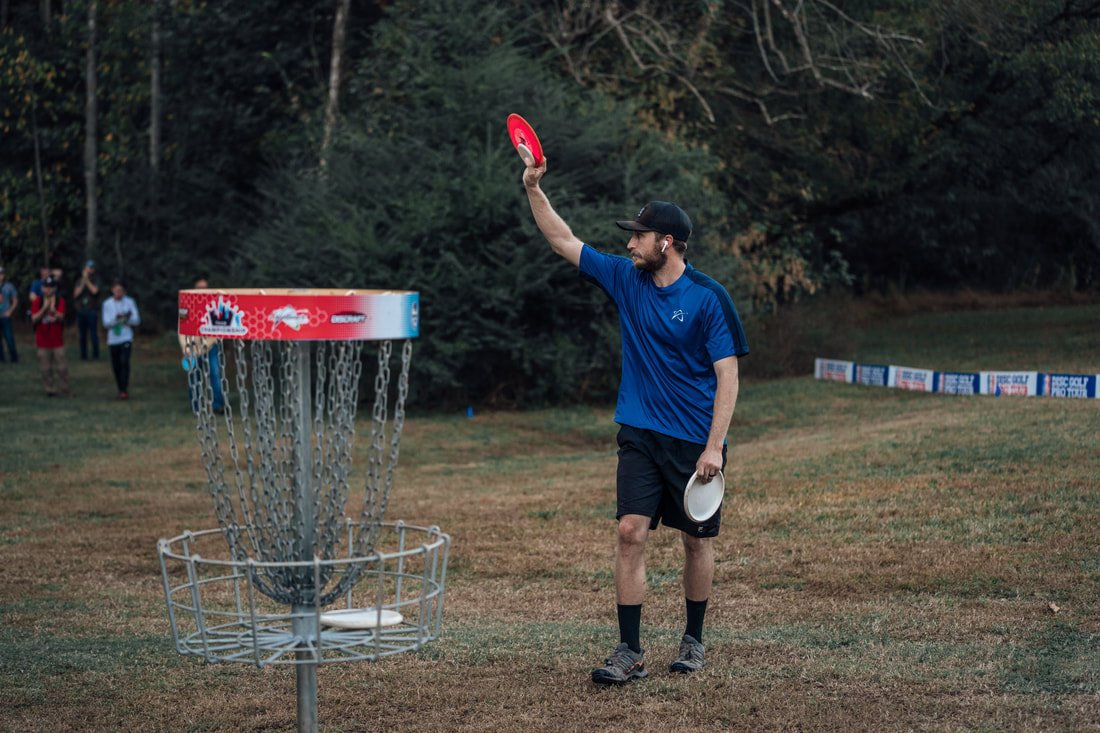 ​The final day of the Disc Golf Pro Tour Championship is always bittersweet. It is exciting as the opportunity to crown another champion unfolds on the course, but for the players and fans of the game, it represents the end of the Pro season. This year was no different. Going into the round, Chris Dickerson was a favorite to repeat, as he had gone through all four rounds of competition just like last year to make it to the lead card. Calvin Heimberg was also a player who many thought had a shot at winning due to his recent success at Hall of Fame. Drew Gibson and Kevin Jones represented wild cards of sorts. Drew Gibson had made his way from the quarterfinals round, his entrance to the Pro Tour Championship bolstered by his playoff victory at Portland. Kevin Jones had been in the hunt all season but had dropped off at the last few events. Coming in from the semifinals round, there was not much game film of Kevin to know if he would be in the mix.

Chris Dickerson and Calvin Heimburg would jump out to an early lead with Kevin Jones taking a bogey on the first hole and Drew Gibson taking pars for the first four holes. It was clear that both Drew and Kevin were playing the course, gunning to take a birdie when available but making pars to avoid any big numbers. Drew would be the first to fold, he carded an OB double-bogey six on hole five, three-putting from inside C1. While it was not over for Drew, he would need a significant come-back to make it into the mix. Kevin would not find his first birdie until hole seven, and this would prove to be too little, too late. By hole seven, Chris and Calvin were both four-under-par giving them a four throw and five throw advantage over Kevin and Drew.

On eight and nine, Calvin would grab two more birdies while Chris settled for par. Going into the back-nine with a two throw advantage, Calvin looked to be pulling away from the field. Calvin would grab another throw on Chris on hole eleven to move to a three-throw lead. Hole twelve is where the tide began to turn, though. Calvin would bogey, and Chris would birdie. A two throw swing. Chris was now back within one throw. Calvin and Chris both bogeyed hole fourteen. Briefly, Kevin had a longshot at a push to be in the mix again, but he would need to birdie out, and the other two would need to falter.

In dramatic fashion, the entire Championship came down to 18. Drew Gibson was first off the box; and he unleashed a thrilling rip  that blew past the basket and went OB. Calvin was next, ripping a fairway drive on a good line with enough power to cause the disc not to hyzer out of it’s glide, coming up just short right, about 40 feet out. Having just made a C2 putt on seventeen, could he do it again? Chris Dickerson followed Calvin with what was the shot of the tournament, putting a beautiful full flight on a fairway driver on nearly 500 ft hole, and skipping up to the basket about 14 feet to the left. Kevin Jones rounded out the foursome with his drive coming up just short of Calvin’s. First to putt, Kevin drained it from fifty feet securing third place. Heimburg is next, the fate of the event in his hand, with a 35-foot putt to force a playoff. A great offering splashes out strong side right leaving a Chris Dickerson with a easy putt to become your 2019 and back-to-back Disc Golf Pro Tour Champion!

It has been an exciting season of disc golf here on the Pro Tour. We want to thank everyone for following along and supporting the pros as well as the DGPT! We are looking forward to 2020 and even more exciting finishes.