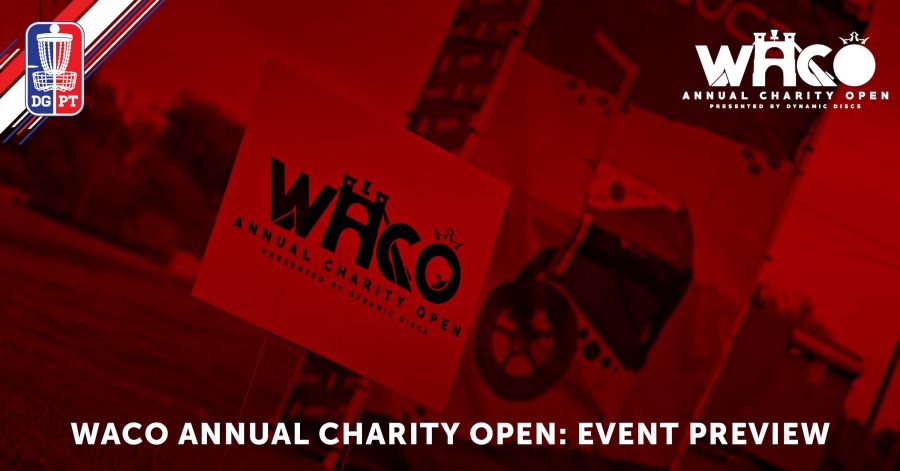 We are now two days away from the Waco Annual Charity Open presented by Dynamic Discs. At 4pm ET on March 15th we go live with coverage of both the
MPO and FPO feature cards . Last year was an exciting finish the MPO division and we are looking for more of the same this year.
The Event
The Waco Annual Charity Open is an established event here in Waco, TX. Taking place at Brazos Park East on ‘The Beast’ the course gives the Pros the ability to showcase nearly every shot they have in their bag. The event itself also features an am side to the tournament which includes the opportunity for players to play The Beast in the same conditions as the Pros did on Sunday. This gives AMs an opportunity to experience a Pro Tour course, with the Pro Tour setup, without playing in the Pro division.
Just like many of the stops on tour, one thing that makes the Waco Annual Charity Open so special are all of the extra events taking place throughout the week. Tomorrow (3/14) there will be a clinic put on by the Dynamic Discs Team at Brazos Park East starting at 4:30pm. There will also be the players party on the suspension bridge Friday starting at 7pm. Festival games will be on hand alongside vendors, glow golf, and everything else Waco has to offer. If you are in town you will not want to miss it. This year the Pub Crawl returns with new rules and more prizes . With $500 on the line this is another excursion that really pays off.
The FPO Division
The FPO division will see current Waco Annual Charity Open Champion Paige Pierce returning to defend her title. After last year’s win (by seven throws), Paige will be looking to continue the play she kicked-off the tour with at The Memorial . Other players will be looking to challenge this week with a stacked FPO field including Sarah Hokom (last year’s second place finisher), Stephanie Vincent (who claimed the third place spot), Jessica Weese, Lisa Fajkus, and Catrina Allen to name a few.
Like always, FPO coverage will be provided during the live coverage each day at 4pm ET . You will also be able to catch post-produced coverage of the lead FPO card thanks to The Disc Golf Guy once the event wraps up next week.
The MPO Division
Last year saw a playoff ending between Jeremy Koling and James Conrad. This year players like Paul McBeth and Kevin Jones will be looking to add their names to the mix after not attending in 2017. We will have three feature cards covered during the first round including: Central Coast will be covering Bradley Williams, Ricky Wysocki, Gregg Barsby, and Fan Vote Winner: Nate Sexton; Jomez Productions filming Landon Knight, Addison Collins, Miles Seaborn, and Paul McBeth; then at 4pm ET we will go live on our YouTube channel with defending Waco Annual Charity Open champion Jeremy Koling, event runner-up James Conrad, DD Sponsored player Eric Oakley, and fan vote winner Kevin Jones.
You do not want to miss out on the action here in Waco this week. Make sure your alarms are set to watch live each day March 15-17th starting at 4pm ET.