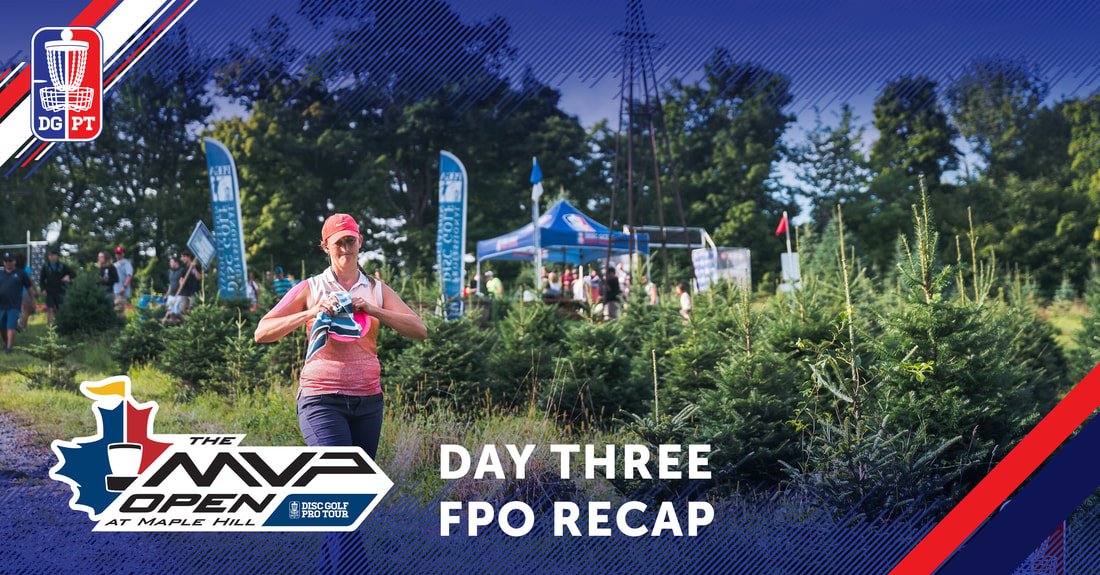 ​The final round of the MVP Open at Maple Hill saw Sarah Hokom start the day with a three throw lead on the field. Several players made moves, but ultimately Sarah was able to prevail and land her third Disc Golf Pro Tour win of the season.

Early in the day, Holly Finley began making waves as she was -3 thru 4 on the day. Holly was able to continue to move up the leaderboard and did not card her first bogey until hole eleven. Holly would continue to push her way up the leaderboard, moving up five spots on the day. After her first and only bogey, Holly would card two more birdies on holes fourteen and seventeen to finish out her final round of the tournament five down.

Holly was not the only player who moved up multiple spots today. Nicole Dionisio moved up six spots, and Jessica Weese moved up five spots. Jessica’s move was enough to guarantee her a place in the cash which is always nice to see after a rough first day.

On the chase card, both Catrina Allen and Madison Walker both made early pushes to advance their winnings. Catrina carded two birdies and one bogey on the front nine to start her day -1 par. Madison had a rough start to the day, carding a double bogey on hole three but was able to recover with birdies on the even holes 4, 6, 8, & 10. Which also left her sitting -1 after hole nine. However, the back nine was rough for both of them, and they both ended up finishing below where they started for the day.

On the lead card, it was a fight to maintain position. Rebecca Cox and Lisa Fajkus spent most of the day holding off the push Holly Finley was making from the third card. After the front nine, Lisa was back a few spots, but she was able to tune in the drives on the back nine and move up one place to finish third. Rebecca Cox had a rough start taking a double bogey on hole three but then put together a consistent round down the stretch to keep from giving up any more than one spot on the day.

For the other two players on the card, Sarah Hokom and Paige Bjerkaas, it looked like they would be battling down the stretch. Paige gained a throw on Sarah on hole two, and they proceeded to go shot-for-shot until hole six where Paige Bjerkaas would land in the rough on the left of the fairway, and Sarah Hokom would park her drive. The two-point swing solidified Sarah’s lead, and the round was never really in question from there. Sarah would finish the day tied with Holly Finley for the hot round, winning the tournament by seven with an eleven under par.

Going into the tournament, Sarah Hokom needed to make up twenty tour points on Paige Pierce to tie for the series. Sarah’s win and Paige’s sixth-place finish created a forty point swing that vaulted Sarah to a twenty point victory for the season. When the Tour Championship takes place in Jacksonville, Florida Sarah will be guaranteed one ring and will be in the hunt for a second ring while playing the championship.

You can watch how she brought home the win today starting at 2 PM ET on the Disc Golf Pro Tour coverage of the MVP Open at Maple Hill. Tell your friends and tune in to watch!