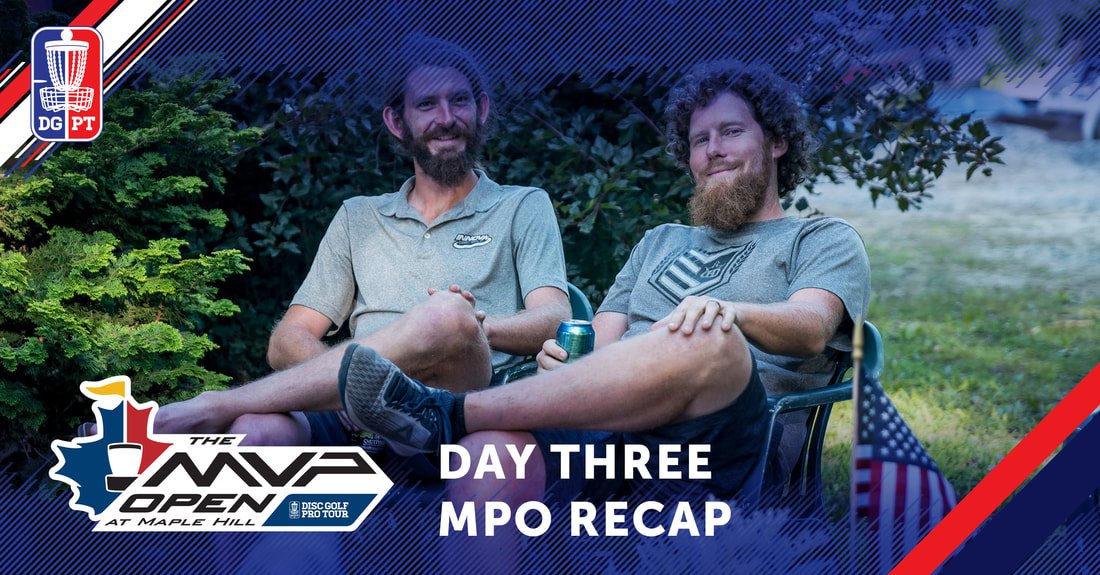 Hole 4: James Conrad is making C2 putts look easy. You should tell your friends and tune in for the final round of the @mvpdiscsports Open http://www.dgpt.com/watch

â€‹Conrad started the day hot with a three on 1, a par on 2 with a flick putter roller out of trouble, and a circle 2 putt for birdie on 3â€¦then 4â€¦.then a drop in on 5. A quick par on 6 followed by a birdie on 7, the fourth hardest hole on the course today, could only be followed up by a circle 2 putt for birdie on hole 8. At this point, James was 100% inside Circle 1â€¦and 100% inside Circle 2. A standard par on 9 barely slowed him down as he went on to birdie the next four holes. His only major slip up on the round was hole 14. His drive left him a tester of death putt for birdie. His putt had potential for a moment but that came crashing down as he bounced off the top of the right side of the cage and slowly fell into the lake. It would only take 2 more birdies and 2 more pars for James Conrad to walk away with $3,570 and the 2018 MVP Open Title. James threw a total of only 155 throws in three rounds on a course that rates over 1000 for par on most any day. 44% of his shots in making Circle 1 In Regulation plus 92% of his Circle 1 Puts and a generous helping of 7 Circle 2 Putts this weekend sealed the deal.

Hole 2: @paul_mcbeth with the birdie. We are off to a hot start at the final round of the @mvpdiscsports Open. Tune in now to watch Paul and Ricky battle down the stretch http://www.dgpt.com/watch

â€‹Paul McBeth started today in second place, one throw behind Ricky Wysocki. It looked like we were going to witness a contemporary classic clash on a classic course. It didnâ€™t take long, hole 5 to be precise, for James Conrad to tie Paul for the lead. By the end of hole 7, Paul would never gain the lead again but he pressed James till the very end. Including an edge of Circle 2 Putt on hole 4, and a 117-foot jump putt for birdie on hole 13 from hitting the guardian tree on the left side of the fairway. On 18â€™s tee pad, McBeth trailed Conrad by only a single throw. Paul played his round completely clean and had his drive on 18 only landed clean on the fairway, we would at least be talking about a playoff because James followed him right into the same set of conifers. Paul certainly gave himself and happily took the jump putt look he left himself on 18 but it was just a few inches away from history. Congrats to Paul on his second place finish this weekend.

Calvin Heimburg hung with the big dogs today and did well beyond respectable. Throwing 6 under at Maple Hill today is unofficially rated 1059. Nice work sir. Calvin averaged more than 25 over his 1028 rating this weekend so the next update is looking to be good for him. Just check out his effortless circle 2 putt to match James on hole 8 for a birdie.

Hole 8: How about some C2 birdie putts from @cheimborg and James Conrad? You wonâ€™t want to miss out on the final round action. Link is in our bio.

Unfortunately, today was not Ricky Wysockiâ€™s day to be the first person to ever win back to back at an Open at Maple Hill. In a completely uncharacteristically round, Ricky only made 89% of his Circle 1 Putts. He fell from the lead after a double-bogey 5 on hole 3. His drive landed inbounds after an early tree. His approach left him just outside circle 1, putting for par. He lofted up what looked like yet another Sockibomb from Circle 2 when it fell short at the last moment, dropped to the ground, stood up and slowly started to roll, and roll it did. Ricky lined up another circle 2 putt and fired quickly, primed from the last putt. But that putt couldnâ€™t finish in the chains either and he walked away with a double and never caught the leaders again.

At this point Iâ€™m completely speechless, exhausted from playing the event myself and following all the action. You really canâ€™t give a disc golf fanatic anything better than a Pro Tour event at Maple Hill with a one throw gap on 18â€™s tee pad and a brand new Champion on this historic weekend. Congratulations again to James Conrad, an absolutely stunning display of finesse, power, and mental fortitude to leap from fourth to first on the final day of the 2018 MVP Open. That ends our season play for this year, in two months weâ€™ll be coming to you from Jacksonville, FL on the 18-21st of October for the Pro Tour Finals. For points this year, Paul is in first, Ricky is in second, James is now in third. Scour the internet for all the footage you can get because this weekend was just downright unreasonably good disc golf.