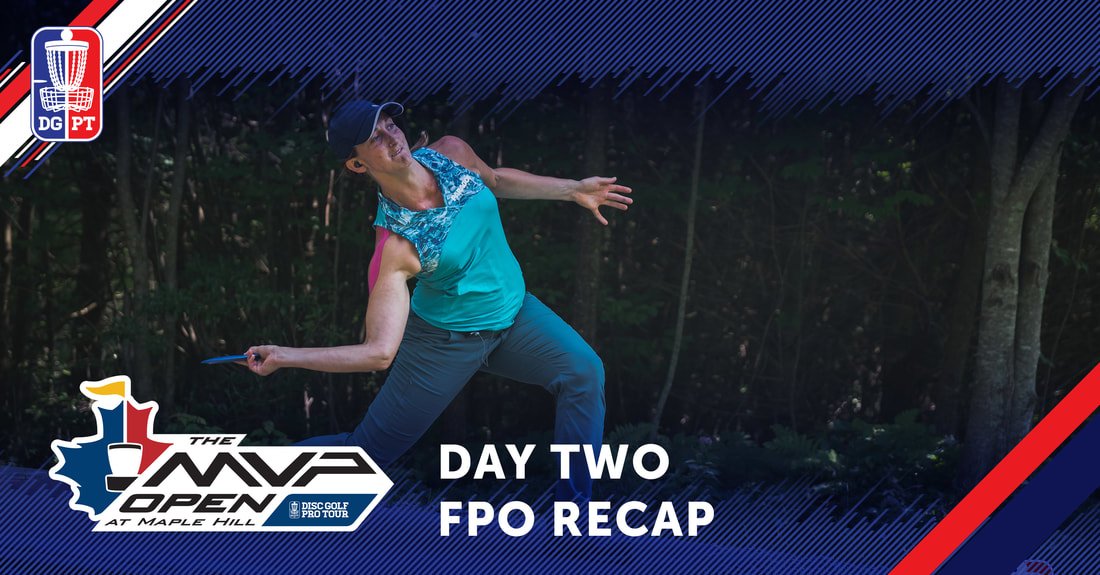 ​Day two of the MVP Open at Maple Hill has started, and the FPO division has wrapped up just in time for lunch. Moving day presented many opportunities to the FPO field, and a few players capitalized on it.

Kona Star Panis tied for the second-best round of the day. She started the day with a birdie on hole two and finished the day with three birdies on holes 16-18. Kona carded only one OB on the day and was able to use her -3 down to move up twelve spots and finish above the cash line going into the final day.

Another player making moves was Lisa Fajkus. Lisa used her commentary juju from round one to stay focused after a disheartening triple bogey on hole six to power back and finish the day at plus one. Lisa was able to use a 100% C1 putting stat to leverage some problematic holes to keep her in the hunt down the stretch. Lisa found four of her five birdies from the day on the back nine where she used them to offset three other bogeys that moved her up to finish the day in third place.

While Kona and Lisa made moves earlier in the day, much of the moving story comes from the lead card where Sarah Hokom and Paige Pierce started the day out tied. The round started slowly for all four players on the lead card, but things took a turn on hole five. On hole five Sarah Hokom stepped onto the tee and threw a flick over the water. The height and angle were perfect. The crowd held their breath and then exclaimed as the disc hit just low of the cage, missing the ace by mere inches. Paige Pierce was next on the box. She opted to throw the safe route to the right but found herself in trouble early. Her second shot also nicked a tree and landed her short of circle 2. Paige went for the three, but her putter sailed past the basket and into the water. Paige would settle for a six on the hole, a four throw swing between her and Sarah.

Hole 5: it’s been a slow start to the morning but @sarahhokom livened things up with her drive. Tune in at 2pm ET to see how close she was to an ace! It’s moving day here at the @mvpdiscsports Open at @maplehilldiscgolf. You do not want to miss out on the action! http://www.dgpt.com

Sarah Hokom would continue to push after hole five, she also nearly aced hole eight and made the birdies on seven and eleven to help extend her lead. Sarah carded bogies on holes twelve and fourteen but would finish the day with a turkey, carding birdies on 16-18 just like Kona. Sarah is leading the tournament after carding a -4 hot round for the day.

Bjerkaas Shines in Round Two

Paige Bjerkaas began the day slow, struggling off the tee and carding bogies on holes one, three, four, and six. On hole 8 Paige Bjerkaas started a very unassuming birdie run that included parking hole 10, and joining everyone on her card in getting the birdie on 11. (If you can embed 11s post use it).

Hole 11: Star frame. Tune in at 2pm ET and watch round two coverage of the @mvpdiscsports Open at @maplehilldiscgolf http://www.dgpt.com

After walking up on Pierce’s drive (it was just outside C2), Bjerkaas commented that drives like Pierce’s make her want to quit disc golf. However, Bjerkaas kept pressing forward and picked back up her birdie streak on hole fourteen and fifteen. Paige landed pars on fifteen and sixteen and chained out for the eagle two on eighteen to finish her day tied with Kona for the second-hottest round. Paige Bjerkaas is now sitting solidly in second place.

Moving day was definitely exciting here at the MVP Open at Maple Hill. You can tune in at 2 PM ET today to catch Sarah Hokom, Paige Pierce, Rebecca Cox, and Paige Bjerkaas as they navigate the Maple Hill course on day two. ​