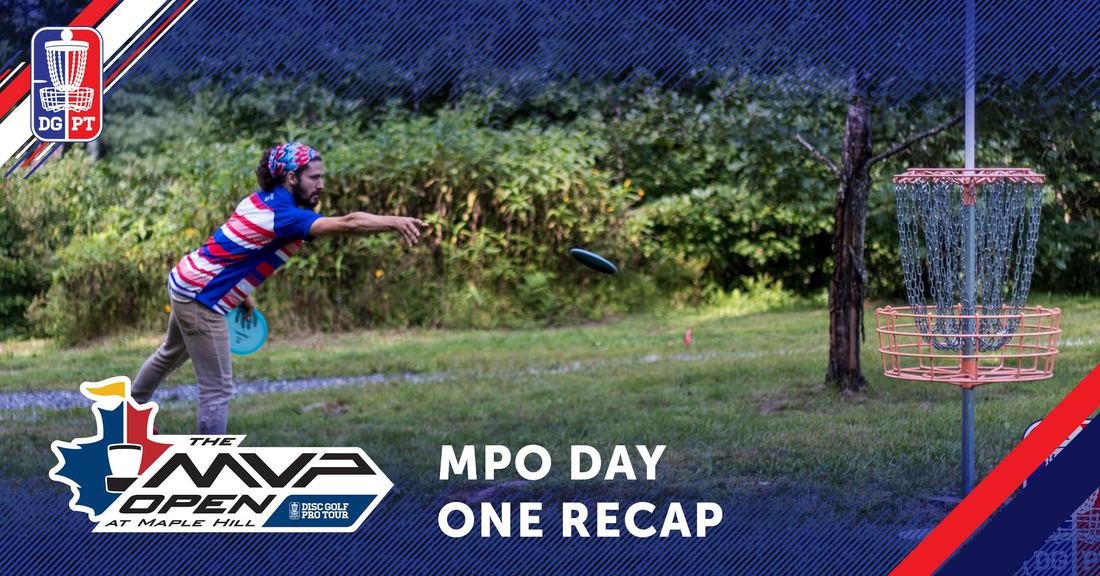 â€‹We got to the end of the day here in Leicester and as expected at Maple Hill has delivered a crowded top of the leaderboard. In first place is Nikko Locastro but hot and calm conditions made for some hot rounds as there is a six-way tie for 6th place between Steve Brinster, Nate Sexton, Matt Dollar, Paul McBeth, Calvin Heimburg, and Austin Hannum. Joel Freeman holds eighth place on his own right now to round out the chase card. Before we get into it, just take a look at last weeks AM side winner Nicholas Carl making the island green on 8 for a birdie by skipping it off the water:

Hole 8: Nick pulls a Reid Frescura and makes the island. Tune in now to watch the next ten holes live. http://www.dgpt.com

The hot round of the day belongs to the 2010 champ of the Maple Hill Open, Nikko Locastro. For 17 holes straight he didnâ€™t card a single bogey. Then on hole 18, a botched drive brought his clean run to a minor low of a finish. At the end of the day though, even Nikko canâ€™t be mad about one bogey when you hold the lead by 2two. Nikko was certainly clean off the tee for the first 17, but he made his money on the green, canning 100% of his Circle 1 Putts. Nicely done sir, thereâ€™s hardly a flat green here at Maple Hill so itâ€™s likely youâ€™re never taking the same putt twice.

Itâ€™s hard to know whoâ€™s day to write about when there are this many people tied for second. Catching up with Steve Brinster after the round, he told me about his play on hole 1. when you put the approach on hole 1 under the basket for a drop in birdie it pretty much sets the tone. 4 under through 5 looks pretty good too. Things may look like they slowed down after that, but a double bogey on 9 after a rough drive demanded three more birdies on the back â€“ Brinster finished 3 under on the back to join the pack.

Nate Sexton started early but his score held up quite well. It seems like hole 9 was his nemesis too though as it was his only bogey on the day. Nate also pulled off a 100% rate inside Circle 1 but never made a single putt outside of 10m. If he can add one or two more of those to his day heâ€™ll be in good position to unseat Nikko.

Rounding out the lead card, thanks to his PDGA number at 26045, is Matt Dollar. Dollars only slip up was on hole 2 where an OB drive just him a bogey. The highlight of his day though was his birdie on 9. After a classic Matt Dollar thumber, he tossed in a 100 foot make for the birdie. There wasnâ€™t another player on tomorrowâ€™s lead card who even had a sniff at a birdie.

Paul McBeth also started hot throwing 4 birdies in a row, but bogey holes 5 and 8, two must gets doesnâ€™t help you get the lead. When your Paul McBeth though you can still battle back to second place. I caught up with him two and he was stoked about his start but unhappy with his misses. Heâ€™s adjusting tomorrow though from a gator to a fairway driver. He might be playing on the chase card but make no mistake, McBeth is hungry to join the Wysocki and Cale as two-time winners at Maple Hill.

Calvin Heimburg and Austin Hannum make up the rest of the tie for second. Heimburg fell one short of Nikko for birdies on the day, but two bogeys â€“ on holes 4 and 13 held him back from a top finish. Hannum finds himself close to the top thanks to another 100% from inside Circle 1. Rounding out the lead card with the pleasure of a bogey-free round is Joel Freeman. That is a hard task to accomplish here at Maple Hill, so big kudos to Joel on that.

Before we wrap everything up itâ€™s worth letting you know that Samuel Aldrich is the sole person to card anything better than a birdie with his 355, tight wooded lane ace on hole 15. Make sure you donâ€™t miss the action tomorrow though. If you can make it here, come watch in person, you wonâ€™t regret it. If you canâ€™t make it here in another 20 hours or so, watch us live, starting at 3:15 PM EST. Until then, make the best of the weather and get out there and through.